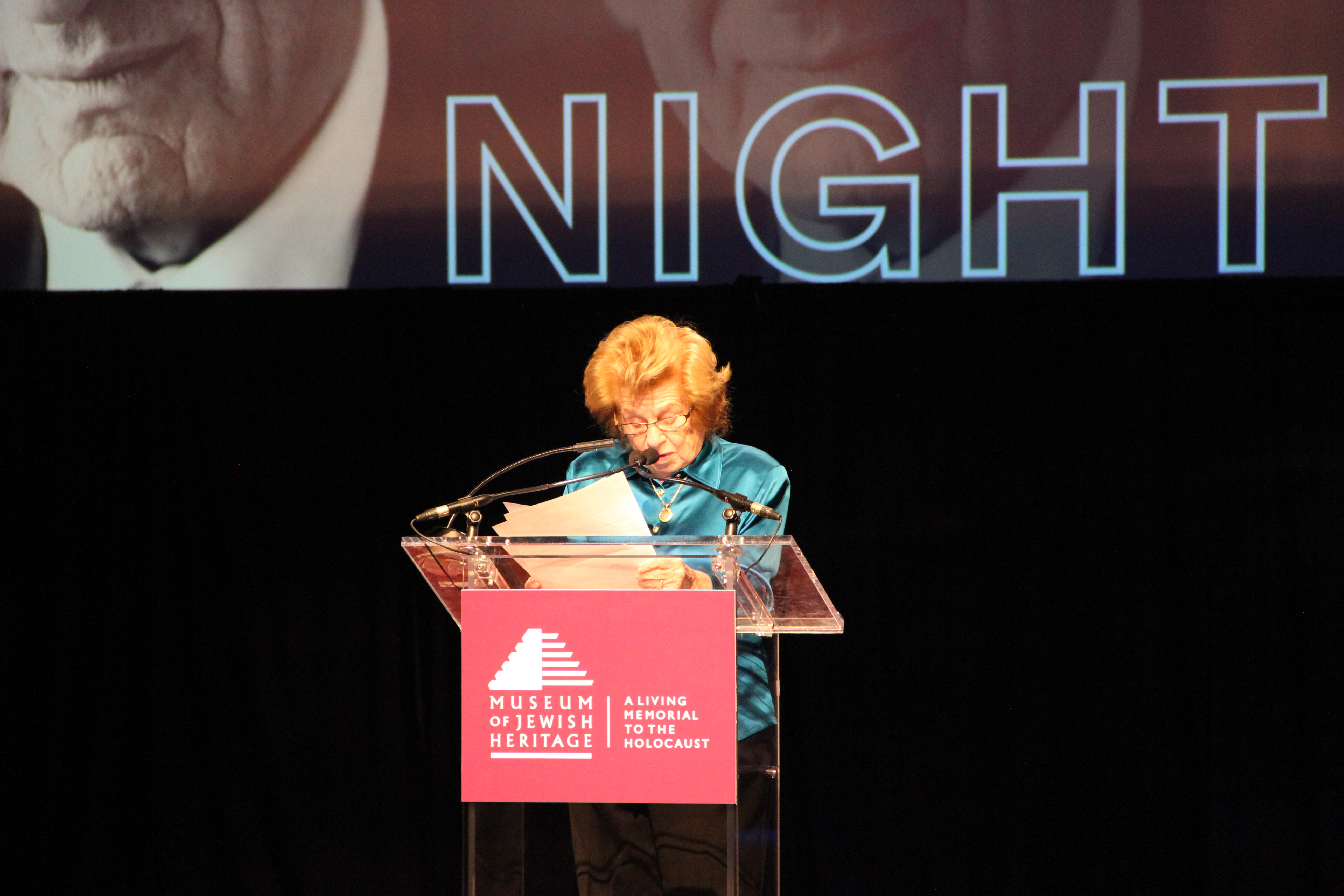 “My name is Consolee Nishimwe, I’m a genocide survivor. During the genocide I was 14 years old, which is almost the same age as Elie Wiesel was during the Holocaust…I lost my father and my three brothers and many of my family members…During the genocide, rape is used as a weapon, so I was one of the women and girls who were subject to rape…Right after the genocide it was very hard for me to talk about my experience, but reading Night by Elie Wiesel gave me the courage to speak up…What I got from Night was…we can’t afford to be quiet, and we have to be a voice for others…”

A motivational speaker and author of Tested to the Limit: A Genocide Survivor’s Story of Pain, Resilience and Hope, Nishimwe was among the more than 65 speakers that gathered at the Jewish Heritage Museum on Sunday to read passages from Nobel Peace Prize winner and Holocaust survivor Elie Wiesel’s memoir Night in honor of Holocaust Remembrance day.

“Right outside the building there is a huge protest for refugees…If Elie Wiesel were here today he would be one of the first people to speak out against this type of discrimination.“

Ann Curry, Dr. Ruth, Elliot Spitzer and more read Wiesel’s words describing dark times, but the tone of the night remained optimistic as guests shared how one man’s journey provided solace for them during their bleakest moments. Some shared personal motivations for attending, including Dr. Ruth, who said it was “very important…because I was sent out of Nazi Germany in 1939.”

Jacqueline Murekatete, founder and president of Preventing Genocide, said that Wiesel’s book got her through one of the toughest periods of her life.

“By the end of the genocide I lost my entire immediate family, my parents, my siblings, most of my family members,” Murekatete remembered. “As any child of that time, I witnessed a lot of horrors, people being killed around me and losing my family…but I was fortunate that I had an uncle that lived here [America]. But after the genocide he had found out that I survived, he adopted me and brought me here so I came here at the age of 10 right after the genocide. And a few years ago, when I was a sophomore in high school I read the book Night…it became a catalyst for the genocide prevention work that I do now. Elie Wiesel was an inspiration not just on us, but genocide survivors everywhere the way he was able to use his life to be a voice for the voiceless.” 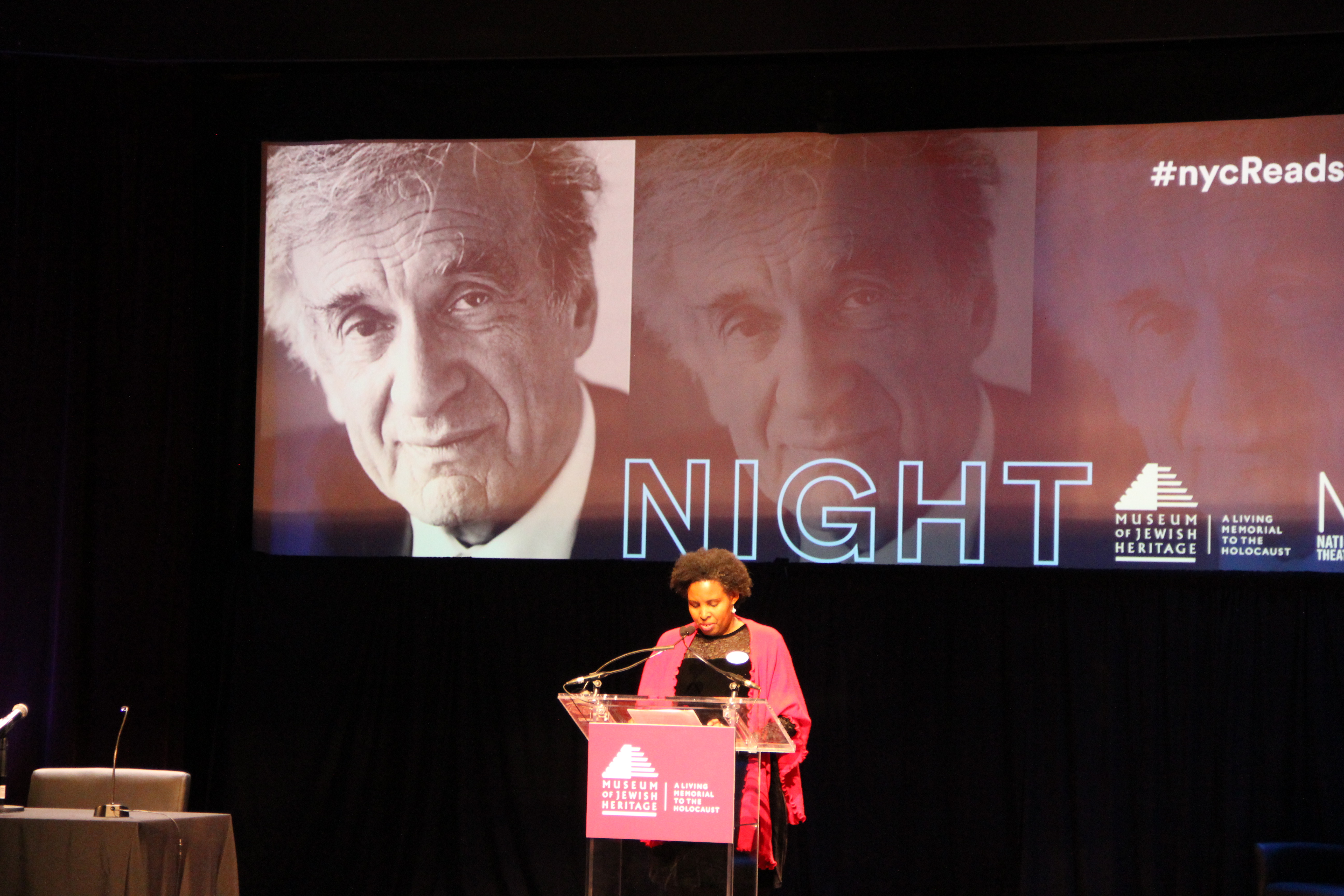 As refugees spoke of finding hope amidst the horrors of genocide, President Trump’s freshly signed executive order banning immigration from Iraq, Iran, Syria, Somalia, Yemen, Sudan, and Libya imbued their words with even more significance. Michael S. Glickman, president and CEO of the Museum of Jewish Heritage, talked with us about parallels between Night and the protesters just outside carrying signs reading “Refuges Are Welcome” and “Let them in.”

“I think Abe Foxman, one of our earlier speakers, put it best as he said we are doing this program as the Statue of Liberty is blindfolded and Emma Lazarus is gagged. I really do think that this is the moment where we need to speak up, and we need to be present and we need to participate in a dialogue that needs to make sure that this never happens again. In this community and elsewhere.”

Jacqueline Murekatete echoed Glickman’s sentiments with a personal experience of her own. “I was talking to someone last night and saying how it is kind of ironic to be here tonight and talking about the holocaust and the dangers of hate and racism and so forth, and right here outside of the building there is a huge protest for refugees,” said Murekatete.

“So this is again the same type of discrimination and racism and xenophobia, some of the people mentioned in the reading. We would know that if Elie Wiesel were here today he would be one of the first people to speak out against this type of discrimination which is not only morally wrong but unconstitutional. So, it’s kind of ironic and bittersweet, but at the same time it is an honor to be here and be reminded of the fact that we have to speak out, and the work has to continue because the dangers are very real, as we see with what’s going on in this country right now.” 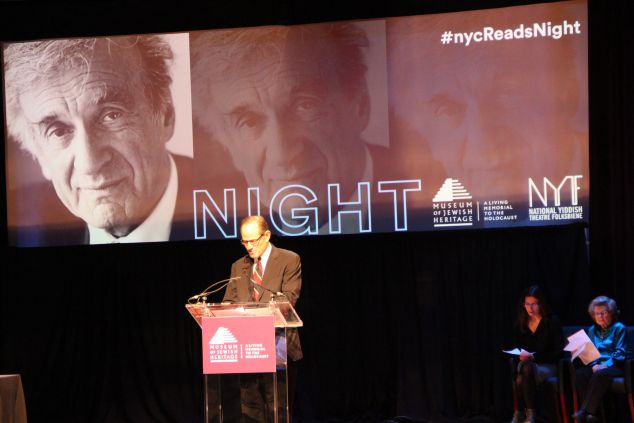 Yuh-Line Niou, member of the New York State Assembly for the 65th district, further emphasized why people need to hear Wiesel’s words now more than ever.

“I grew up in the JCC, actually. When I was a kid in El Paso, Texas, there wasn’t a lot of diversity and there was a lot of bullying for the only Asian kid that most people have ever seen. I was able to find a home in the Jewish community center there; the kids were cool. Right now in America we are actually going through a difficult period of time, we’re seeing all of these executive orders happening, we just had a march right here today,” she said.

“We’re facing discrimination on an epic scale and it’s starting to become acceptable somehow. We literally can see the Statue of Liberty from this building, and it means so much because we saw what happened in the past, and we saw the holocausts and what happened with the Chinese Exclusion Act and the Japanese internment camps and it’s still happening, and it’s still reoccurring, that’s why this event is so significant right now to remember the things that people have gone through so we don’t continue to repeat history.”

“I just feel like I’ve been quoting Elie Wiesel all over my Facebook because everything he has said is so relevant right now, everything that he’s warned us about. Also, the comment that he made about us being the center of the universe, the idea that any time that there is a woman or man that has been discriminated against that immediately is the center of the universe—whenever there is any racial discrimination, religious discrimination. These are quotes from him that I’m drawing a lot of inspiration from right now because I think that so many of us need to hear those words so that we can continue to fight.”

While speakers dissected the horrors of xenophobia, racism and genocide, the night was a celebration of unity and optimism. People from all backgrounds came together to remember a great man, but most importantly to share his message. Michael Glickman perfectly summarized the day: “Simply one of the best coming togethers of New Yorkers that I have ever seen and I think it really speaks well to our community as a whole, the city and the opportunities that are out there.” 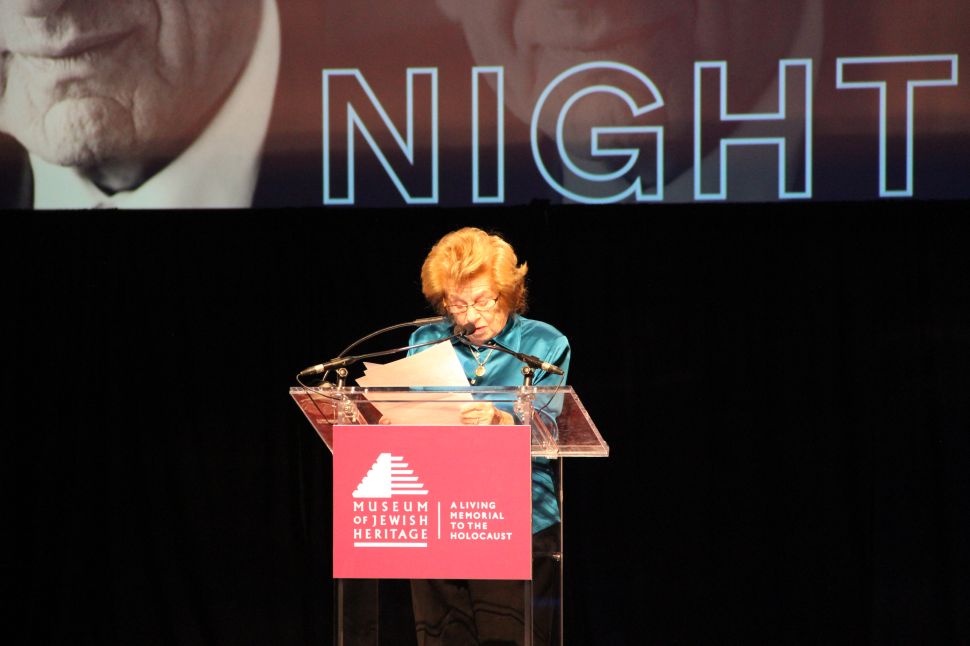