After surviving a Miami nightclub workout, Snapchatting scenes from IMAX spin and attempting blindfolded yoga, few boutique classes terrify me. Still, I put off trying a Pilates reformer machine, with visions of falling off of a very high tower, directly onto the floor below in front of super toned fitness aficionados. I could practically see my obituary. Machine Pilates remained firmly in the land of Akin’s super hard spin class, screaming boot camp instructors and the all red, ultra-intimidating Tone House…until instructor Catherine Chambers convinced me to try a private class. She teaches privates on tower, reformer, chair and ladder barrel (all words that still sound vaguely meaningless to me, but she swears they make sense).

Chambers teaches at Makara Studio in Bushwick, Plank Pilates on the Lower East Side, and is about to begin instructing at Box + Flow by the Bowery. Her Instagram moments alone convinced me it was a class worth pursuing (just think of the Boomerang potential), especially since I’ve spent hours being tortured during endless mat Pilates classes.

I quickly realized a private class is preferable when starting with a new, terrifying machine, as the instructor can make sure you won’t fall off, injure yourself and thus be confined to a fitness-less life (and they can also personally check your alignment, of course).

“I watch everyone as carefully as I can in my semi-private classes, but getting to work with someone one-on-one gives me peace of mind going forward,” Chambers told me, as we truly focused on my whole body, including abs, arms and legs. She prefers one-on-ones to get to know clients first and make the entire ordeal less intimidating, as she understands fitness isn’t always simple at first (she cited her first SoulCycle class as proof).

After all, it’s much easier to tell an instructor about past injuries in private, as it’s slightly uncomfortable to yell about back problems from the back of a packed class. Throughout the workout, Chambers made sure I was focused on alignment, citing “wrists under shoulders, knees under hips and hips and shoulders stacked on your side.”

Chambers also made sure I kept my spine neutral throughout the hour, which is much more difficult than it sounds. “Neutral spine means your tailbone is connected to the mat of the apparatus, and there’s the tiniest space between the mat and your lower back, just like when you’re standing. Your ribs are knitted together in the front, and your shoulders are down and back. Focus equally on the stabilizing muscle and the muscle doing the work,” she advised.

“If it burns, you are probably doing it right, but it should never feel like something is about to pop or snap. If it’s just a lot of work, smile… its good for you,” she explained, while it certainly was burning. This particular type of Pilates wasn’t as terrifying as expected, but it definitely would have been without a private lesson (and someone there to catch me). And it certainly feels like a better workout than what happens on a mat. After all, why not have a machine workout for you? 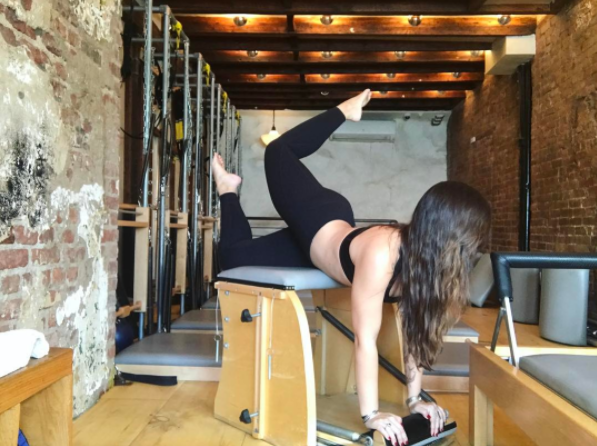