Leave it to Gucci‘s Alessandro Michele to start off Milan Fashion Week with a bang. The latest show was just as over-the-top as expected…and then some. Here’s what went down.

1. The set was insane. According to an Instagram posted by Gucci, the set featured “a pyramid at the center of the plexiglass tunneled runway crowned with a weathervane in the shape of a rooster.” While we’re still trying to decipher exactly what that means, it appeared to a covered catwalk with flashing lights; the models looked like they were walking through an endless airport terminal that doubled as a disco.

Presenting the #GucciFW17 women’s and men’s show space. Featuring a pyramid at the center of the plexiglass tunneled runway crowned with a weathervane in the shape of a rooster. See the show live on Instagram Stories or through the link in bio.

2. Artist Coco Capitán hand wrote the exterior of the invitations, which posed the question: “What are we going to do with all this future?” Her distinctive scrawl was also featured on t-shirts that were included in the show and the yellow one worn by Michele as he took his bow.

It's almost time @Gucci 🌸🐝🌺📀 "what are we going to do with all this future? Gucci + Florence Welsh #bestinvite #saksstyle

But that’s not all. The invite was actually a vinyl, one side of which included a reading by Florence Welch of William Blake’s Songs of Innocence and Experience. The other side was Jane Austen’s “A love letter from Frederic Wentworth to Anne Elliot,” read by A$AP Rocky.

3. The theme of the collection was The Alchemist’s Garden, which was described by the brand as “an anti-modern laboratory.” It translated into many, many floral prints of the trippiest iteration possible.

4. The show featured a whopping 120 looks, including both men and women.

I kind of didn't want to love it AGAIN but every single favourite inspirational reference was in there and tougher than before! Too much, really. 👏🏻👏🏻❤❤👌🏻👌🏻 . . RG @ellie_pithers #gucci #inspiration #casting #details #everything

5. As far as over-the-top accessories go, this show was chock full of them. That included bug-festooned waist bags, knit hoods, bullring septum piercings, fringed parasols, full-length chain-mail body suits that shrouded model’s faces and bags that were attached to wrists via chains.

6. There were miniature Jane Austen books tucked into the purses.

Inside the bags and carried by models, little books by Jane Austen. #GucciFW17 pic.twitter.com/xvV846PlBv

7. The front row was populated by familiar faces of the brand, including Jared Leto, Tom Hiddleston, Florence Welch and A$AP Rocky. Hari Nef was also there and she took what might be the best photo of fashion month: she snapped a selfie with Anna Wintour.

Sparkle was the name of the game in terms of beauty. Not only were talon-like nails dotted with crystals, but rouged lips were accented by crystals of the same color red. 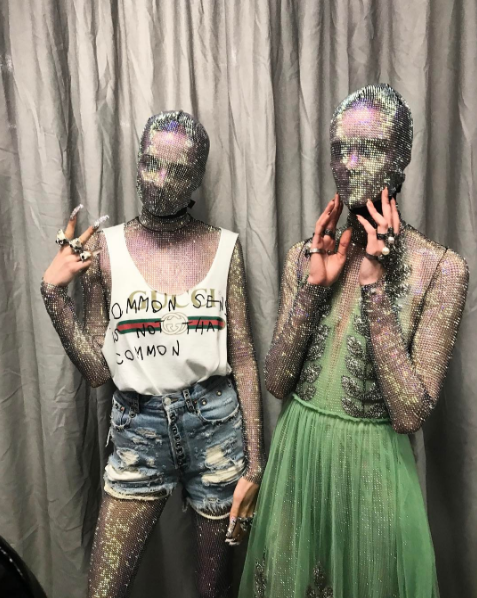