New York’s is something of a prize to its residents. A New York bagel is mostly a New York bagel because of the . I suppose I’ve never really appreciated it, or tried to, enough to notice any extraordinary quality—the bagels are damn good. Of course, it’s much better than the well with that slight sulfur smell I grew up on.

What I think we all in New York took for granted were the systems in place to make sure the we drank was clean. And with news from August of flawed testing, our pride might have taken a hit. Especially since this issue would mostly affect the most fragile of buildings and the most fragile of people: schools and children.

The silver lining here is it’s isolated and controllable and we can easily fix it now that the issue is known. And who do we have to thank? A lot of people, really, though I think we can give them one name:

The Flint crisis opened up the whole country’s water systems to scrutiny. But it wouldn’t have happened had it not been for the many scientists, activists, mothers, all those in Flint, Mich., who have worked hard to supply clean and support, to obtain information, to spread information and so much more.

And one of the hardest working and most vocal among them is Melissa Mays.

Mays was at the Women’s March on Washington on January 21 and gave a speech, pleading for one thing: “Please don’t forget about us because we have not forgotten about you,” Melissa Mays had said on stage.

“We are poisoned, we are sick, we are pissed off, but we have not let that stop us. We have gone to the streets and the courts, and we stand together. We stand with all of you. And as you’re out there fighting for the rights that we all deserve, like clean and clean air, just remember don’t forget about us, and we’ll stand with you.”

Why does she need us to remember Flint? It’s because the clock at the top of Water You Fighting For’s website continues to tick off the days since the was clean—before the emergency financial manager switched Flint to Flint River as its source. As of publishing this article, it’s at 1,028 days.

Though, 1,028 days ago, not many knew exactly what was wrong with the in Flint. For most, it all began with a with a letter two years ago.

“We received a letter that said our was contaminated with a cancer-causing byproduct,” Mays told the Observer, “meaning they lied because all the questions, concerns and health issues people had had before—they had just dismissed it as bumps on the road.”

That letter was mailed on January 2, 2015, according to Detroit Free Press. Or day 252. That same month, Mays started her organization, You Fighting For, and got to work, providing , protesting, marching, lobbying, traveling to the governor’s office, collecting information, holding educational meetings, speaking all over the country, testing , petitioning, filing lawsuits . . . the list goes on. There’s a lot of work to be done in 1,028 days when the still isn’t clean.

My newest lead test proves the #FlintWaterCrisis is nowhere near over. Safe level is 0. Max is 15. Please share!

Before Mays, mother of three, started in activism and before the crisis was known, she worked in public relations and marketing for a private radio station. But then, the effects of the contaminated started to show: The high levels of lead and copper caused her to have, among other complications, seizures.

Now, Mays is a full-time activist, working at Family Navigator “to help families here get the help they need,” and at Flint Rising as an organizer, helping spread information about Flint’s crisis.

“I work two jobs and the other stuff and have three sons and husband,” she said and laughed.

Flint Rising was started in January 2016 and is a coming together of Flint groups, such as  You Fighting For, Flint Democracy Defense League and Michigan Faith in Action. It was started after “Nayyirah Shariff reached out to talk about how the undocumented community was not getting anything in Spanish and not getting the proper information,” Mays said.

“They were still boiling the , still drinking the .” Boiling contaminated with lead does nothing to clean the —it could even make it more concentrated, according to the CDC. Right away, Flint Rising began to canvas the neighborhoods to get the proper information out.

“The state put nothing out in anything but English. There was nothing in Arabic, nothing in Spanish,” Mays said. “And their first attempt at putting things into Spanish, they used Google Translate, so it was absolute gibberish.”

And it really takes a lot of work, especially when it involves uncovering information not made public.

“The more we put in FOIAs, and the more we fought and went to court,” she said, “we found out they knew about the lead and other contaminates and the bacteria and that people were dying in 2014, and they weren’t telling anyone.”

One of the many things Mays has been involved with is a pending lawsuit, for which she is working with the NRDC, ACLU and Concerned Pastors for Social Action.

“We have a pending lawsuit under the Safe Drinking Act, which is a federal statute that governs drinking quality in the U.S.,” said Sarah Tallman, one of the lawyers from the NRDC on the case.

“The lawsuit is pushing to compel the relevant city and state officials that operate the system to follow the rules in terms of chemical treatment of the , monitoring tap for lead and, after, reporting to state regulators.”

“The case we’re working on with her is about compelling compliance with the relevant federal law in the future to insure that this crisis doesn’t happen again,” Tallman said. “We’re also pushing for replacement of all the lead service lines in Flint, which is you know the best and really only long-term solution to getting lead out of drinking .”

While the lawsuit might be pending, it has yielded one early temporary and much-needed victory.

“The court granted a preliminary injunction. Preliminary injunction is all about the interim emergency relief,” Tallman said. “While the tap remains unsafe, the injunction required the city and state to either insure and verify that every home has a properly installed and maintained filter or to deliver bottled to those homes for which it could not verify a proper filter had been installed and is working.”

‘Most people just assume with all the media attention and all of the congressional hearings and this and that, that things have been done for us in Flint, and it just isn’t the truth.’

The NRDC also happened to be a sponsor of the Women’s March on Washington, and after organizers from the march and Justice League NYC, along with Mark Ruffalo on his bus tour, visited Flint, Melissa Mays’ name came up to speak to the crowd of marchers.

“They asked if I was willing to speak about what was happening in Flint,” Mays said. “They took a lot of inspiration from that fact it’s been women, moms, sisters standing up, fighting for everyone in this state.”

And from the experience, Mays found she was able to connect with people who really care, which Flint needs now more than ever, since, as the Women’s March motto goes, “This is a marathon, not a sprint.” And the Flint crisis has been a 1,028-day ultra-marathon.

“It was amazing to see that many people, that many men, women and children come together for human rights that actually care,” Mays said.

“And I had such a good response. People asking questions about Flint, asking what they can do to help. And that’s the main reason I wanted to speak, to let the world know the state’s still lying. That our is not safe, it’s not better. And we are not better off. Most people just assume with all the media attention and all of the congressional hearings and this and that, that things have been done for us in Flint, and it just isn’t the truth. It just felt good to get this out, and I was happy to be a part of it.”

As Mays continues her fight at home, she also has been helping other communities in the nation.

“I just got back from Dallas,” she said, “where we’ve been teaching people to test their and how to stand up and how to organize like we did in Flint—to fight back.”

“[Mays] is a fierce advocate and understands the importance of citizen advocacy to make change,” Tallman said. “And I think she really believes in the power of citizen advocacy and has shown how much can get done when you raise your voice and ask for the information that necessary for citizens to really speak the truth about what’s going on in their own communities.”

And still, on day 1,028, Mays continues to fight because the clock at the top of her website is still running. The is still not clean, and Flint still needs help.

“We’re continually testing because the changes constantly…It’s getting worse all the time because the pipes are crumbling,” Mays said. “And we’re still receiving bills for contaminated . We are fighting the shut off. That might seem like a fine thing. But if you don’t have access to running in your home, child protection services can be called in. And that is not what traumatized Flint residents need at this point in time.”

On February 10, Mays and members of Flint Rising had a rally outside Flint’s City Hall. Because they’re paying for the they can’t drink, she said. And not just that: Flint pays the highest rates in America, according to a recent study, at almost double the national average. And to add more on the backs of the already suffering, Flint will no longer receive bill credits from the state.

“State taxpayers will not provide additional funding for bill credits or source , since the quality in Flint meets the requirements of the Federal Lead and Copper Rule and Safe Drinking Act,” said Anna Heaton, a spokeswoman for Michigan Gov. Rick Snyder, according to the Detroit Free Press.

Even though, according to MLive, the state still doesn’t advise Flint drink the water unfiltered.

It seems like the clock on Mays’ website won’t stop any time soon. And you can expect Mays won’t either.

Update 4 p.m. : Melissa Mays said via email that this morning, February 16, she testified before a Congress hearing about the dangers of cutting environmental regulations and infrastructure funding. “We can’t let anyone else become Flint,” she said. The march continues. 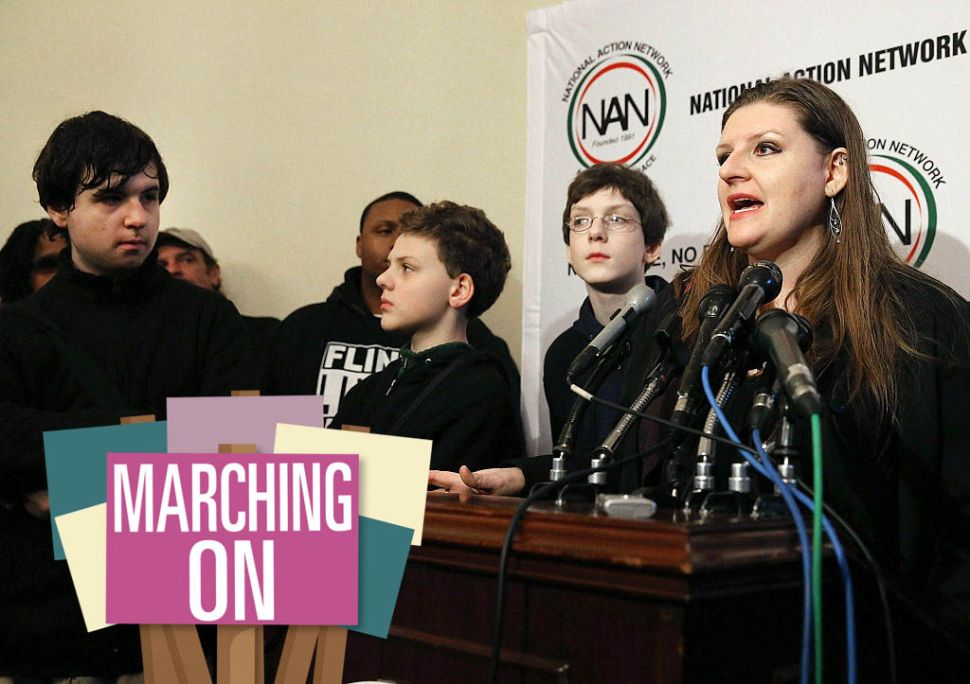