Somewhere out there the Gods heard me complaining about characters I wouldn’t mind seeing dead on Taboo, because hallelujah! Thorne is dead. Good riddance to yet another horrible male character who does nothing but commit violence toward women because he’s threatened by the prospect of emasculation by way of his wife’s blood relatives. In this case, however, Thorne’s fear wasn’t unfounded. Nevertheless, he is super dead now and I, like Zilpha, will not mourn him for long. But I will admit that I was both elated and slightly disappointed at the way he went out: skewered like a shish kebob in his sleep by Zilpha with a giant hat pin. While it was satisfying to see Zilpha enact justice against her terrible husband, he died with barely a whimper, which is a stark contrast with the guttural noises Delaney’s victims tend to emit when he slashes them open. For all the suspense Taboo has built up between Delaney and Thorne, rivals for both Zilpha’s affection and the inheritance rights to the Nootka Sound, Thorne’s death winds up being so anticlimactic it almost feels incomplete. Perhaps it’s just a way of reminding us, the audience, that petty squabbles mean little when compared to the unrelenting force of East India Company, which bears down hard on Delaney this week. They are the real big bad that we should all be very, very afraid of.

Finally the time has come: Zilpha is free of Thorne. This means the other event we’ve slogged through six episodes waiting in hot anticipation for is finally upon us: sibling sex. Yes, that happens. And how polite of Delaney and Zilpha to wait until Thorne is no longer breathing to resume their affair. On the day of the funeral, clad in her black mourning dress, Zilpha triumphantly sticks the blood-crusted pin she used to kill her husband into her hat. We see a different side of her this week, almost high off the murder of her husband, and reflexively returning to Delaney’s arms. As expected, Delaney approaches their reunion with brooding apathy. At the funeral, he shoves the grave diggers aside and jumps in to finish the job himself, and ensure that Thorne rests two feet past the regular depth—not so much for the grave robbers, but so that he stays good and buried. The service wrapped, Delaney stomps upstairs to Zilpha’s bedroom and demands she “take that fucking dress off now,” riding crop still in hand. (If this is starting to sound like a better written version of Fifty Shades of Grey, I’m just trying to recreate the atmosphere I witnessed on screen as faithfully as possible.) Cut to Zilpha and Delaney rolling around the bed in ecstasy. But while Zilpha is thoroughly enjoying this moment she’s waited so long for, their love making jolts Delaney into a repressed memory of his mother’s attempt to drown him as an infant, and he begins to choke his sister mid-copulation.

The chlorate-infused gunpowder that Cholmondeley has rushed to completion by scaring his motley crew of lab assistants into stirring non-stop with a story about how terrible babies are for marriage is a five-alarm fire waiting to happen.

Episode six packs an explosive punch—literally. The East India Company declares war on Delaney for setting the train in motion on an investigation into their illicit slave trade, and sets his boat ablaze. The chlorate-infused gunpowder that Cholmondeley has rushed to completion by scaring his motley crew of lab assistants into stirring non-stop with a story about how terrible babies are for marriage is a five-alarm fire waiting to happen. And Delaney’s mind, racked with fragmented visions of his menacing dead mother, is pushed to the breaking point.

“My father cast my mother into madness, then jumped in straight after, he’s scarcely a man to follow,” Delaney tells Brace at the start of the episode. But Delaney’s memories of his parents are as suspect as the rumors flying around Covent garden regarding his cannibalism. “Always cow-eyed about your sainted mother,” Brace taunts him. “She wanted you dead James.” Delaney has been searching his mind, and his father’s basement, for answers about Salish for weeks now, and all along Brace has been withholding the truth: his mother was sent to Bedlam for trying to drown Delaney as a baby. It’s not what Delaney wants to hear, or believe, but as his flashbacks increase in frequency and intensity over the duration of the episode, the images of the past are impossible for him to shake.

Not only is Delaney unrelenting in his violence, but he’s seemingly unaware of just how low he can go.

The disturbing truth about his mother, combined with his sister’s newfound availability and the mounting pressures of delivering combustible gunpowder to the Americans while trying to ward off the Crown and the East India push Delaney into new depths of darkness. Not only is he unrelenting in his violence, but he’s seemingly unaware of just how low he can go. When the farmer who has been caring for his brother/son betrays him and tells the East India where he’s been concealing the makeshift gunpowder factory, Delaney not only kills him but rips out his tongue. The betrayal (the first of two this week) also forces Delaney to move the remaining stores of his gunpowder elsewhere before it’s ready, setting up what’s sure to be a disaster down the road. Before doing this, however, he does successfully deliver the first batch to the Americans, amazingly without incident. Under the guise of a once fictitious, but now conveniently virulent, cholera epidemic spreading through the city, Delaney and crew load the powder into coffins and funeral carriages and cart it to Dumbarton in the dead of night.

But moving the gunpowder doesn’t stop the East India from gaining on Delaney just when he thought he had the advantage. Foiled in their efforts to uncover the powder factory, Strange directs his minions to “exploit what is undefended” next—in this case, Delaney’s ship. They blow it to smithereens, leaving Delaney with plenty of merchandise to trade in the new world, but no means of getting there. The ship’s destruction is the result of a betrayal by one of Atticus’ men, and Delaney repays him by gutting him and ripping out his heart. Our hero’s brutality is so over-the-top at this point, it’s even too much for Atticus to stomach, and he collapses into hyperventilation as soon as Delaney’s out of sight after witnessing his henchman get torn to bits.

And while Delaney—shipless, motherless and with fresh blood on his hands—descends into a drunken bender, the East India is forced to revisit its own dark, recent past. Chickester reveals to the company men that the sunken slave ship they’re being investigated over, the Influence, was first registered as the Cornwallace and its name was changed to hide its illegal human cargo. Not only that, but because the company wanted the ship to fly under the radar, it let it set sail with less crew than it could handle. The ship ran aground and its captain ordered the cargo hold shut, leaving 280 slaves to drown in order to protect the company’s illegal trade operation. These horrific images, combined with Delaney’s visions from the very first episode, point to an obvious connection between our hero and the crimes of the company. Delaney’s complacency in the “evil that you do,” as he phrased it, is becoming clearer to us, even if it’s still hazy for our protagonist.

Which brings us to Winter. Her character’s affinity for flitting in and out of scenes like a ghost, entering just as Delaney is deep in a moment of private reflection, has been both a convenient plot device to extract more information about his past and show that he can, perhaps, have a softer side. When he’s with Winter, he demonstrates an inkling of restraint and self-awareness, constantly warning her to stay away. “I’m not fit to be near you,” he tells her in this week’s penultimate scene, through drunken slurs. And while Winter has so far been the only character unafraid of Delaney, it appears she should have listened. His drinking fades into more memories of his mother, and he awakes the next morning, face in the mud, to discover Winter—dead. The evidence suggests Delaney has finally gone too far, and why should we be so surprised? His violence makes even London’s most rough-and-tumble thugs quake in their boots, and people have been selling songs about his cannibalism for a penny on the street. Is it so unbelievable he’d kill a child while blacked out? No. But on Taboo, it’s long been established that magic and the supernatural frequently commingle with the visceral realities of life and death, so I have a feeling Winter’s death is not all it seems.

The most poignant image of the week, besides Winter’s pale and lifeless body, is Delaney sitting in a warehouse filled with unstable gunpowder, flicking a match. We’ve witnessed some terrible things, and Delaney has basically hit peak Delaney, but I see chlorate-fueled fireworks in the future.

I still have questions…

— (And you thought you would miss out on a weekly history lesson) In case you were wondering about Cholera masks: The beaked masks that we see Dumbarton and several other characters wearing this week in the wake of the cholera outbreak is a reference to the iconic costumes worn by plague doctors in the 17th century. Inside the beaks, doctors placed sweet smelling perfume to block the “bad air” and germs they believe spread disease.

— “You can mystify it all you want but in the end it is a cat, in the middle of the dessert, with no nose,” George Chickester says with a chuckle to the East India company men, referring to Sphinx of Egypt. But while it’s an amusing image, he conjures it only to remind the company men that the world as they know it exists only because of the horrors of slavery. It’s a powerful statement, and it also touches on one of the show’s great failings. While Taboo succeeds at reviving many uncomfortable and lesser-told historical narratives with vivid imagey, it merely touches on them and moves on. The East India’s involvement in the slave trade, and the overt racism of the Regency era, pop in and out of conversation, but are rarely explored in depth. 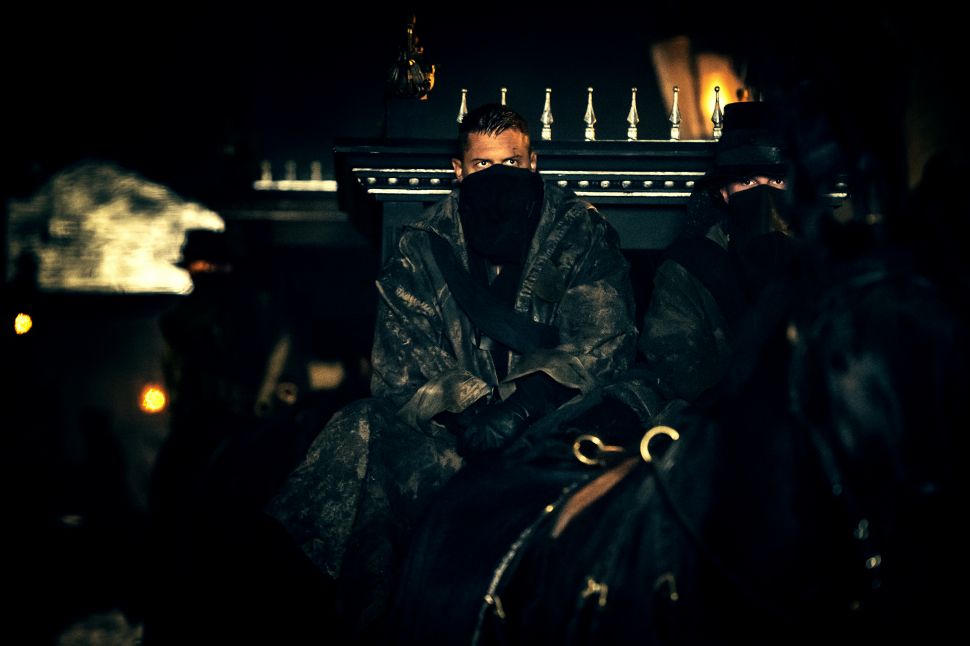