Writer-director Peele, best known as one-half of the sketch comedy duo Key and Peele, cracks open one of those simple premises destined to end on a slippery slope with a pile of corpses and a distant siren. It begins with a lovey-dovey interracial couple—Chris (Sicario‘s Daniel Kaluuya) and Rose (Girls’ Allison Williams). They prepare to spend the weekend at her parents’ posh home in the woods for the first time. Sure he’s nervous, even more so when he learns Rose hasn’t told the ‘rents he’s African American—but he’s good natured and dick-struck enough to accompany her. What’s the worst that can happen?

On route, Rose’s sedan smashes a deer that leaps out of nowhere. They are surrounded by, gasp, trees! A menacing white cop straight out of central casting arrives to sort out the situation. The officer asks Chris for his license even though Rose was driving. She talks back to the policeman, defending her man, but Chris’ eyes register tension at her potential for her privileged mouth getting him in deep with the law. If he only knew! As they drive past a strangely passive black gardener on the long driveway to her parents’ estate, Peele amps up the suspense before the couple even reaches the oversized front door—and her parents, Missy and Dean Armitage (a cunning pairing of the always terrific Catherine Keener and Bradley Whitford).

From liberal dad’s claims he’d have voted for Obama a third time (see, I’m no racist) to the desperately strained looks Chris gets from the family’s black maid (Betty Gabriel), the lover’s heebie-jeebies escalate. A black man in a white bastion, he feels his isolation intensely, even as Williams’ game Rose tries obliquely to reassure him. It’s only daddy! And, this is the movie’s beauty, the audience shares Chris’ paranoia and unease in the company of these apparently welcoming white folks.

Is the racism real or perceived—or both? When Chris clams up before the cop, or flinches at casually biased comments, occasionally hoisting a rueful smile, it’s evident that past experience colors present situations. Rising star Kaluuya (currently filming Ryan Coogler’s Black Panther for Marvel) empathetically draws viewers in with large, popped, expressive eyes and a reticence that reflects his character’s sense of the danger of speaking his own mind in mixed company.

Could it simply be culture clash—or something more diabolical? The scales begin to tip between paranoia and threat as Chris attends an awkward garden party. After numerous borderline prejudiced conversations about his sexual prowess and Tiger Woods with elite attendees, he gravitates to the only other black guest, Anthony (Lakeith Stanfield). But, in this encounter, all the cultural cues are wrong: Anthony’s wearing a straw hat and khakis, drinking a martini and returns Chris’s proffered fist bump with a limp handshake. The guy is acting white—all while there’s something trapped in his eyes trying to get out.

Without a moment that sacrifices humor or shocks or narrative speed, Peele uses the mainstream thriller form to get under the skin—and behind the eyes—of a black man navigating the dominant white culture. At first, we jump at the scares just beyond the door, the sudden movements and the strange nonsequiturs of supporting characters that only clarify as the plot progresses. Our rising sense of foreboding arises from Peele’s ability to embed the audience inside the black male gaze using horror-comedy conventions. The hero may get struck down—but Peele refuses to knock the audience over the head with a message that’s nevertheless compelling: To understand the insidiousness of racism, you have to put yourself in a marginalized man’s shoes (and sweat it out). And the only way that can happen in movies is if Hollywood diversifies, encouraging people of color behind the camera—and in the spotlight. It wouldn’t hurt to acknowledge the profitability of black-driven entertainment. In its opening weekend, Get Out struck a chord and grossed $30.5 million. 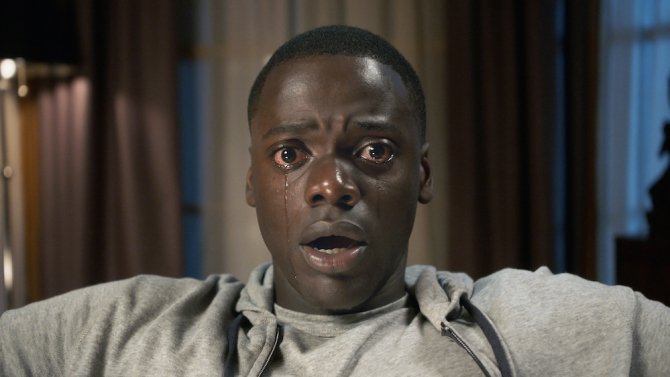