There was no better symbol for the profound state of disconnect between The Grammys and humanity than when Adele split her award for “Album of the Year” in half last night. In that Mean Girls moment, a blubbering and self-deprecating Adele acknowledged the tremendously obvious disparities between age, race and gender that seem to dictate who can actually win a Grammy in one of the show’s biggest general categories.

“My artist of my life is Beyoncé,” Adele said, expressing that her award for 25 should have gone to Queen Bey, though she broke the award accidentally and appeared to exchange it for a new one backstage.

“This album for me, the Lemonade album, was so monumental, Beyoncé. So monumental, and so well-thought-out and soul-bearing, and we all got to see another side to you that you you don’t always let us see. And we appreciate that. All us artists here adore you. You are our light. The way you make me and my friends feel, the way you make my black friends feel, is empowering. You make them stand up for themselves. I love you, and I always will.”

Adele was much more candid later. “I really thought this was her year,” she told reporters. “What the FUCK does she have to do to win album of the year?!”

Be white, perhaps. Though there is never any purely objective definition of what makes one record better than another, and subjectivity is shaped by a voter’s respect for the contexts and narratives surrounding a work, Beyoncé’s Lemonade was nominated for nine categories and won two—Best Music Video (for “Formation”) and Best Urban Contemporary Album.

Consider the context of Beyonce’s Lemonade even further. It broke new ground by debuting as a short film on HBO. Its surreal, aesthetically rich narrative commented on female solidarity, black identity, race relations, infidelity and a slew of other timely themes. Yet hours before the show started, her pattern of loss was foretold when Lemonade lost Best Music Film to Ron Howard’s Hulu documentary 8 Days a Week about The Beatles’ touring years.

It’s clear that all cultural narratives are not taken into equal consideration by voters.

I've said it before and repeat. I walked out /quit a Grammy nominating panel because the entire room was white & over 40.

The only other woman on the panel was Anne Litt &most of the men had been on for years. I left crying. It was like being fr a diff planet.

My issues at the time with the Grammy panel were lack of : indie representation, females, colors ages.

The Grammys need to change how voting works. Gut institutionalized people who are mired in label /industry politics & know little abt music

A window into this disconnect comes from indie music publicist Judy Silverman, who reveals in the above tweets what many already suspected—The Grammys have a tremendous race problem. It took #OscarsSoWhite for The Academy of Motion Picture Arts and Sciences to look itself in the mirror, but The Grammys needed Adele to make things clear.

It certainly didn’t heed the disconnect when Kendrick Lamar’s To Pimp a Butterfly lost to Taylor Swift’s 1989 last year. In that 2016 moment, a deeply philosophical and spiritual, intergenerational pean for peace and enlightenment took the backseat to a pop album. The Recording Academy’s politics make it look ugly and hateful, so even if that’s not the case, it’s a dialogue they ought to start having if they don’t want more artists like Frank Ocean to boycott.

Earlier in the day, Ocean responded to Ken Ehrlich and David Wild, the creative team behind The Grammys, after they claimed that Ocean’s boycott stemmed from his dissatisfaction with his 2013 performance at the show:

IN REALITY, I ACTUALLY WANTED TO PARTICIPATE IN HONORING PRINCE ON THE SHOW BUT THEN I FIGURED MY BEST TRIBUTE TO THAT MAN’S LEGACY WOULD BE TO CONTINUE TO BE MYSELF OUT HERE AND TO BE SUCCESSFUL. WINNING A TV AWARD DOESN’T CHRISTEN ME SUCCESSFUL. IT TOOK ME SOME TIME TO LEARN THAT. I BOUGHT ALL MY MASTERS BACK LAST YEAR IN THE PRIME OF MY CAREER, THAT’S SUCCESSFUL. BLONDE SOLD A MILLION PLUS WITHOUT A LABEL, THAT’S SUCCESSFUL. I AM YOUNG, BLACK, GIFTED AND INDEPENDENT.. THAT’S MY TRIBUTE. I’VE ACTUALLY BEEN TUNING INTO CBS AROUND THIS TIME OF YEAR FOR A WHILE TO SEE WHO GETS THE TOP HONOR AND YOU KNOW WHAT’S REALLY NOT ‘GREAT TV’ GUYS? 1989 GETTING ALBUM OF THE YEAR OVER TO PIMP A BUTTERFLY. HANDS DOWN ONE OF THE MOST ‘FAULTY’ TV MOMENTS I’VE SEEN. BELIEVE THE PEOPLE. BELIEVE THE ONES WHO’D RATHER WATCH SELECT PERFORMANCES FROM YOUR PROGRAM ON YOUTUBE THE DAY AFTER BECAUSE YOUR SHOW PUTS THEM TO SLEEP. USE THE OLD GRAMOPHONE TO ACTUALLY LISTEN BRO, I’M ONE OF THE BEST ALIVE. AND IF YOU’RE UP FOR A DISCUSSION ABOUT THE CULTURAL BIAS AND GENERAL NERVE DAMAGE THE SHOW YOU PRODUCE SUFFERS FROM THEN I’M ALL FOR IT. HAVE A GOOD NIGHT.

By echoing a sentiment that many have expressed, Ocean would have never even stood a chance at The Grammys. His coup from the music industry around the independent release of Blonde operates wholly outside the sphere of industry wonks who shape the narrative that The Grammys have told over the years.

This is why some cried “bullshit” when Recording Academy President and CEO Neil Portnow prefaced the “In Memoriam” reel with a speech about unifying the industry wherein he said that “what we need so desperately are reminders of all that binds us together.” Seeing patterns play out on racially consistent trajectories year after year are not those reminders. It’s a shameful hypocrisy of The Grammys to talk about inclusion while consistently delegating another black artist’s opus to only win in an “urban” category.

“It was a three-and-a-half hour shit-show, and yet phenomenal, politically powerful performances from A Tribe Called Quest, Chance the Rapper, and a tribute to Prince were all stuffed into the last 30 minutes,” wrote The Daily Beast, “the grand finale of which was Adele apologizing on behalf of institutionalized racism.”

Always pay attention to how many non-white faces are on stage at the end of the night when an award show preaches "diversity."

“Shit-show” highlights included some awful commercials, including a Target ad featuring Lil Yachty and Carly Rae Jensen, along with that Ford ad from The Superbowl when Nina Simone’s civil rights anthem “I Wish I Knew How It Would Feel to Be Free” was used to soundtrack an ad by a company whose founder wrote The International Jew.

The political moments were powerful but fleeting.

Katy Perry wore an armband that said “PERSIST,” a nod to Elizabeth Warren’s silencing on the Senate floor earlier in the week, before her performance ended with a visual of the Constitution. Paris Jackson noted that if all that energy in the room could be directed toward protesting the Dakota Access Pipeline it could accomplish something great. A Tribe Called Quest performed their awesome, timely “…We The People” track as women in hijabs walked around the audience making white folks look uncomfortable. Jennifer Lopez quoted Toni Morrison, saying, “This is the time when artists get to work.”

That last sentiment, that the creative class needs to organize and mobilize to fight the new Washington, is very true. The National Endowment of the Arts is nowhere on the current administration’s budget reports, suggesting they want to eradicate it completely despite the fact that the cost on taxpayers for Melania and Barron Trump to stay in Trump Tower is double that of the NEA’s annual budget. Artists need to come together now more than ever.

But when Recording Academy CEO Portnoy suggested that artists need to stick together, the sentiment was tarnished. This man heads an organization that thrives off of division, evidenced seconds before when host James Corden jokingly introduced him by pretending he was Kanye West, who Portnow invited for a “sit down” after last year’s ceremony but was not in attendance last night. Portnoy’s clearly hearing the general public consensus that #GrammysSoWhite, but nowhere in last night’s ceremony did that criticism seem to be reflected or taken to heart.

When Beyoncé performed a stunning medley of Lemonade tracks dressed like the Virgin Mary, she was either suggesting immaculate conception or giving Jay-Z even more of a god complex. But the intensely surreal and lucid quality of her staging, the recitation of Lemonade’s interludes written by the young Somali-British poet Warsan Shire and Queen Bey’s evocation of intergenerational female solidarity infused a stunning amount of depth and elegance into an otherwise vapid, vacuous night for fashion and branding. Too bad she spent most of her time up on that stage as the entertainment.

When Beyoncé won for Best Urban Contemporary album, though, she did not shy away from speaking her mind.

“We all experience pain and loss, and often we become inaudible,” she said. “My intention for the film and album was to create a body of work that would give a voice to our pain, our struggles, our darkness and our history. To confront issues that make us uncomfortable. It’s important to me to show images to my children that reflect their beauty, so they can grow up in a world where they look in the mirror, first through their own families as well as the news, the Super Bowl, The Olympics, The White House and The Grammys, and see themselves, and have no doubt that they are beautiful, intelligent and capable. This is something I want for every child of every race, and I feel that it’s vital that we learn from the past and recognize our tendencies to repeat our mistakes.”

No wonder people don’t take the music industry seriously. Those of us who deeply care about music want it to be revered and respected as high art, or at least as something more hallowed than ephemeral, fleeting FM background music. But that will never happen while The Grammys continue to function as the primary institutional high- mark for industry accomplishment and legacy.

It can never happen when advertisements and programming blend together so seamlessly.

It can never happen when the ornate presentation of the evening’s performances are infinitely more thoughtful and complex than the vast majority of the music itself.

And it can never happen until The Recording Academy unpacks the pattern of recognition that millions recognize as explicit racial bias. 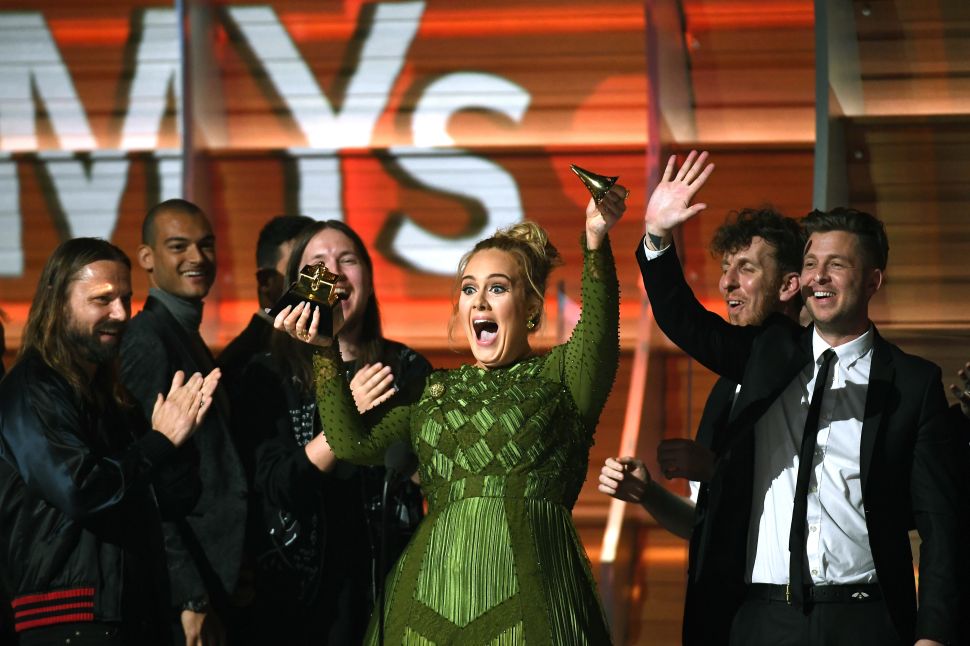