Hillary Clinton’s public appearances have been kept to a minimum since her embarrassing election defeat to Donald Trump, but the rumors of what she will do next have been continuously churned out by her supporters in the mainstream media.

Clinton’s minion, Debbie Wasserman Schultz, has made several attempts to revitalize her image as well. After hiding from the public, Wasserman Schultz is now actively seeking the spotlight. Several mainstream media outlets have published articles centered around her comments attacking Donald Trump, framing her as the spokesperson for the Democratic Party. Of course, there is no mention in these puff pieces of her resigning in embarrassment from her position as DNC chair. There hasn’t been this much positive coverage of Wasserman Schultz since she was first appointed to DNC chair in 2012.

Hillary Clinton is receiving similar treatment from the mainstream media and Democratic establishment. The same tactics as those that were used by Wasserman Schultz, the DNC, and the Clinton campaign during the Democratic primaries are now being used to divert attention from their corruption, while elevating themselves as the leaders of the Democratic Party.

On January 25, Politico published a pointless, brief article headlined, “Clinton: Women’s marches were ‘awe-inspiring.” Despite the fact that she didn’t bother to attend the Women’s March in Washington DC, Politico lent itself to Clinton as a publicity tool to advertise her tweets about the march, ignoring the women’s rights issues the march intended to champion. Clinton wrote similar tweets in response to Trump’s executive order on travel from seven Muslim countries. On January 31, Clinton tweeted, “what I’m thinking about today,” and proceeded to exploit the Khans, similar to how she used them as a political tool against Trump during the general election. Every line she tweets, no matter how lacking in substance it is, is turned into a mainstream news article.

The only public appearances Clinton has made so far have been self-serving. Her appearance at the Inauguration was likely due to wanting to take some attention from Donald Trump while alleviating the negative publicity that not attending may have incited. She attended a production of ‘The Color Purple,’ receiving a standing ovation from an audience filled with the wealthy, who could afford tickets to the last showing in New York City. Clinton “surprised” pop culture celebrity Katy Perry with an award in November, and she made her first post-election appearance at a honor ceremony given to her by the Children’s Defense Fund. Despite avoiding common people throughout her presidential campaign, mainstream media outlets have covered anecdotal stories of people running into Hillary Clinton and taking selfies with her in on hikes in the woods.

Since the election, rumors of what Hillary will do next have included the possibility of Clinton running again in 2020, her running for mayor of New York City, and prepping Chelsea Clinton for a congressional race.

However, the latest rumor may be the worst one of them all. After losing to a television celebrity, Hillary Clinton reportedly wants to become one herself.

“She’s been talking very seriously about the idea of having her own television show,” said an anonymous source close to Clinton. “As a TV host, she’d discuss the issues of the day from a progressive point of view, have top guests, interview world leaders and progressive thinkers.” The source added that Clinton wants to be thought of as the  leader-in-exile of the Democratic Party and continue keeping the spotlight on her. “She thinks being the host of a popular TV show would energize the Democratic Party base and her tens of millions of fans. It’s a way to make a comeback and position herself for another run at the White House starting in a year or so.” Though this rumor seems implausible given the inherent distrust and dislike most Americans have for Hillary Clinton, it would make sense given the level of arrogance Clinton exercised throughout her presidential campaign.

Hillary Clinton blew her chance at the presidency twice, despite having overwhelming and unfair support from the Democratic Party leadership on both occasions. The only thing Hillary Clinton and Debbie Wasserman Schultz should do next is go away, but, like rats scrambling to get back on the ship, they are intent on rebuilding their images and positioning themselves as leading voices for Democrats. Their continued presence is just one more factor that inhibits meaningful reform and progress for Democrats. However, that’s their intent: to prevent the Democratic Party from shifting from it’s entrenched focus on corporate interests, billionaire donors, and self-serving cronyism. 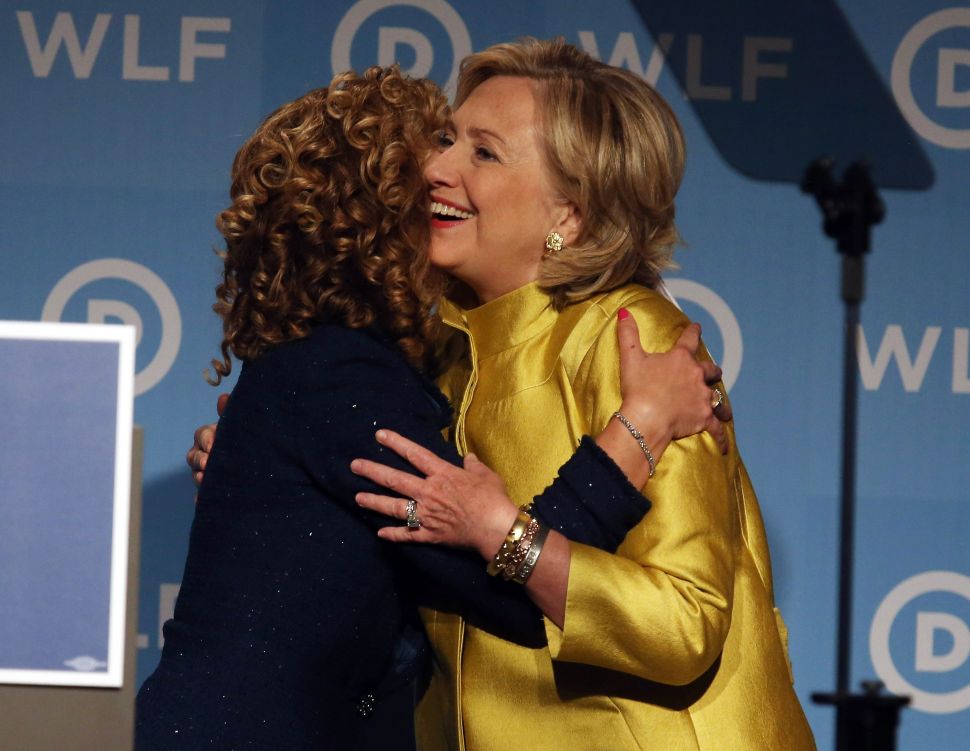