Franny is going to have the weirdest teen years. “Casus Belli” opens with Quinn’s new pal “Fake Alex Jones” yelling hoarse accusations on air at Madame President-Elect Keane regarding the now infamous Sekou van explosion and the ever looming threat of general terror. This actor really spun together a vividly inspired and unique take on “unhinged radio personality.” Our host of “Real Truth” has a voice like 30 years of Dunkin’ Donuts coffee and the emo hair and dad sweater of a man trying to stay relevant in 2017. Oddly enough, and by no fault of Homeland, it still isn’t as weird as the actual Alex Jones yelling about the actual president. This is just going to be a recurring phenomenon in Homeland from here on out, I suspect.

Meanwhile Keane is being rushed to a safe house that for some odd reason, Rob Hemmis, her Chief of Staff, isn’t allowed clearance. I had to watch this twice to pick up on this. From a strictly storytelling point of view, Hemmis as a character has been poised like a snake in the grass for a while. He hasn’t really been involved in much conflict since his introduction and yet as an actor he’s billed fairly high. You heard it here, I’m predicting something weird goes down with Rob Hemmis. Wow, now I feel like Alex Jones.

Carrie tries to unglue her daughter, Franny, from the news coverage of what’s now being referred to as a terrorist attack, all the while Quinn stands and stares with his eyebrows furrowed like a detective who’s cracked something wide open, or a junky who’s about to solve a Wheel of Fortune puzzle. Carrie attempts to send her daughter off to school on 9/11 part 2, but receives a phone call from Reta who informs her that the bomb was in (their client) Sekou’s van. This creates the terrain onto which the central tragedy of “Casus Belli” can unfold. Carrie leaves her daughter with Quinn for a scant 45 minute window preceding the nanny’s arrival so she can go talk to Sekou’s family who’s being hounded by the FBI. What could go wrong? Well, Quinn’s turning into the Unabomber and no one seems to notice.

At the Bah residence, FBI agent and jockish antagonist Ray Conlin is yelling at Sekou’s sister about how her dead brother is a terrorist, even though the bomb only killed one other person and we in the audience know he was for sure murdered. Carrie confronts him and he gets his little FBI pancho all ruffled up while grilling her for springing Sekou out of jail. To his credit, she did use an illegally obtained recording of him pressuring his client to lie, which he knows she must have obtained from the NSA. This underhanded sleuthing is set to blow up in Carrie’s face, at least if Conlan has anything to do with it. She’s now ostensibly responsible for freeing the terrorist that blew up a van and ¾ of an empty parking lot in Long Island City. Carrie panics and meets with her NSA friend in order to warn him that he will be investigated when the NSA tries to find out where the tape that sprung Sekou came from and he pulls a full on Shaggy “It wasn’t me.” Unlike Shaggy, though, he really means it wasn’t him. It’s now uncertain whether he’s lying using the George Costanza method of “believing the lie” or if he really didn’t send Carrie the tape.

A mixture of press and protesters gather outside the Mathison residence demanding to speak to Carrie, who is by now famous for representing Sekou, the fake terrorist. Quinn’s PTSD percolates while reporters knock on the front door and mill around the stoop. Quinn let’s Latisha, the nanny into the apartment but quickly grows squirrely regarding the crowd outside and grabs a reporter by the neck using his one good arm before telling her to inform the rest that Carrie isn’t there and shoving her down the front stoop. Quinn then forces Latisha and Franny into the bathroom while his paranoia about the man across the street gets him into a standoff with the crowd outside. A protester throws a rock at Carrie’s window and then Quinn grabs the gun introduced two episodes back and shoots the protester non fatally.

Dar visits Keane in the safe house and gives her a special phone with limited outside access before informing her of Carrie’s link to Sekou before confiding in Saul that the President-Elect seems “more open” to their insidious suggestions. Saul explains that he’s linked Nafisi’s cruddy cigarettes to a coverup of the Iranian Korean parallel nuclear program. Carrie and Conlan slowly piece together that someone sent the tape to her as a plot to have Sekou released and then he clues her into the SWAT raid currently going down at her apartment. She rushes over and tries to warn the police that Quinn is a trained war fighter riddled with PTSD, but police gonna police and they send in some SWAT guys anyway. Quinn uses his weird one armed Gun Kata on them and takes an officer hostage before stealing his assault rifle. The police kowtow and let Carrie talk to Quinn before using the hostage’s body cam to formulate an attack plan. Quinn mutters about the man across the street before the police successfully take him down.

Keane finds her new burner phone to be generally useless but she does manage to catch Fake Alex Jones railing about her on TV, a scene which frames the episode nicely in a staticky blare of misinformation. Carrie sends Franny off to Latisha’s house and stays back to wallow around in her smashed up brownstone for a moment when she finds Quinn’s phone, on which she discovers his pictures of the man across the street’s venture to Long Island City to plant the bomb in Sekous car. We’re left with a tasty cliffhanger while everything slowly starts to come together regarding a mysterious figure who may be spying on Carrie and may have intentionally helped free Sekou in order to kill him and frame him as a suicide bomber.

Homeland’s seasons tend to wind up slowly for a few episodes at a time before going off like a bear trap two or three times a season and this is snap number one of season 6. Quinn as the disturbed conspiracy theorist who is tragically onto something while appearing mostly sick and unreliable to those around him is tense and empathizing. Carrie’s parrying between the FBI, NSA, CIA, and NYPD was heroic and virtuous, even if she sort of caused the messes she’s cleaning up here. The only thing I don’t understand about this episode is how believable it is that Quinn’s tin foil hat wearing self dropped his phone, which he apparently doesn’t use a passcode on, and then the police overlooked it while investigating a shootout related to a terrorist attack in New York City. At the end of the episode, the police are completely withdrawn from Carrie’s apartment. Hell, no one is around. She’s just standing there in the dark with her windows smashed open, getting ready to leave. No one even seems to be mad at her anymore for causing Sekou-gate. Sometimes plot is like a magic eye, if you look too closely at it, it stops making sense. If you want to enjoy watching Homeland you have to cross your eyeballs and unfocus them a little. 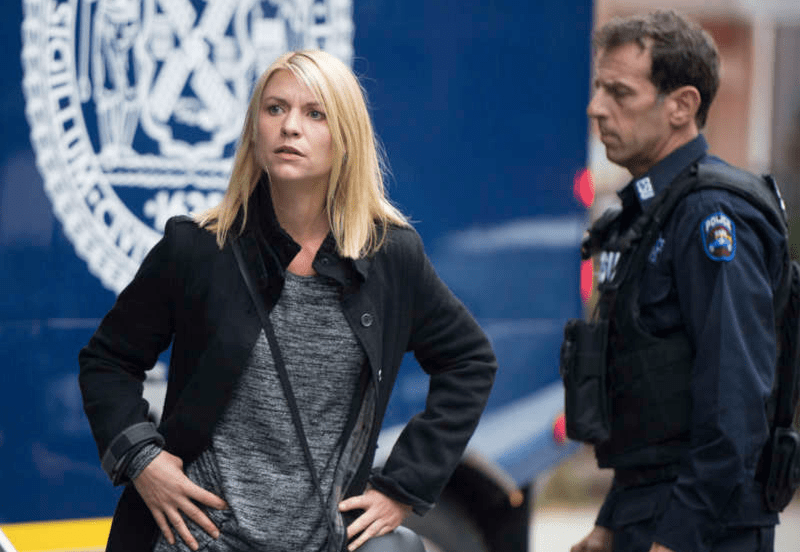