The journey to Jonathan Simkhai’s office on the eve of New York Fashion Week was exactly as one would expect. The streets of the Garment District were buzzing with messengers toting garment bags and the elevator was filled with PR girls from various brands were chattering about backstage photographers.

Simkhai’s studio followed suit, as it was decorated with all the workings of a collection in progress. A rack of unfinished clothing, mostly embellished with beading or feathers and plenty of lace, sat on one wall; another was decorated with sketches, fabric samples and photographs of the projected runway show lineup. All hectic preparations aside, the designer himself seemed cool and collected.

That might be something that comes with practice; this will be Simkhai’s fifth fashion show. But compared to the massive year he’s just triumphed through, a fashion show is just a blip on the Simkhai radar. Since last February, the designer has added eveningwear and swimwear to his label, launched an athletic collaboration with Carbon38 and dressed a long list of celebrities, from Michelle Obama to Emily Ratajkowski and Blake Lively. And if the reports are to be trusted, he also filmed a scene for the forthcoming Oceans 8 flick.

“The past year has been a fashion dream come true,” he explained, while perched on a grey couch in his studio. “A lot of retailers have been so supportive, so we’ve been jumping on that momentum, launching categories and rounding out the assortment. Now the Simkhai woman can come and get different parts of her wardrobe fulfilled.”

It’s true. Today, the options from Simkhai include a feather festooned gown for a black tie event, a chunky but playfully embellished sweater for a cold winter day, a go-to pair of pants that are flattering but trendy, a very Instagram-friendly bikini and a workout outfit that will encourage gym attendance.

The brand, which was founded in 2010, was once known for pretty dresses that were attainable, but still original, due to their mix of feminine details and masculine silhouettes.

“I’ve never worn women’s clothes before,” admitted Simkhai, when asked about the woman he’s designing for. “But I always envision, ‘if I was her, what would I wear to meet my in-laws or go on a date or go to a party?’ It’s a lot of envisioning myself in her shoes.”

Simkhai was a buyer and merchandiser before he decided to try his hand at design. After participating in the CFDA {Fashion Incubator} in 2013, he went on to win CFDA/Vogue Fashion Fund in 2015, which, understandably, shot him into the spotlight. If there’s anything that garners attention in this industry, it’s the unwavering support of Anna Wintour. Well, along with Gigi Hadid wearing one of your designs.

But with all the positivity (and money) that comes with rapid expansion, there’s always a risk of forgetting the core values of your brand. And, in the process, pushing away original customers in pursuit of bigger profits and wider visibility. When Simkhai got his start, he fit squarely in the contemporary space, offering custom lace dresses that were known for being cool and sexy, crafted with impeccable construction. As the brand grew, he started introducing more luxurious materials, like leather and fur, plus extremely intricate hand beading details. Now, his evening gowns are offered for over $2,000 and most of his dresses cost well over $500. An ornate denim dress, which can be custom ordered, will cost you nearly $8,000. So, it’s safe to say that Simkhai now sits in the grey area between the contemporary and luxury space.

But, the designer claims, his original customer still wants a piece of the action, elevated price tags aside, because she’s grown up alongside the brand. “You can slowly build a trust relationship with your customer. I think she’s more willing to buy high end pieces from your brand if she sees consistency through fit and finishing,” Simkhai said. “Plus,” he added, “she’s ready to spend more money. She’s grown up, she makes more money, she works harder and she got promoted.”

Another detail he proudly pointed out is that women of all ages can find something from his collections. Yes, the crop tops are usually relegated to the stick thin frames of teenage models, but his stretchy knit dresses are appropriate for all ages, and body types, for that matter.

“We hear it a lot from retailers, that the versatility in the age is huge. Being able to dress someone like Gigi Hadid and also Michelle Obama is something that, for me, is really important. Also, Ashley Graham, I love her so much,” he added, gushing praise for the plus-size model. Another woman who is a huge fan of the brand is Simkhai’s mother. At 60 years old she is Simkhai’s “biggest fan,” and owns a full closet of his designs.

If this all-inclusive mentality sounds like Simkhai is trying turn his eponymous brand into a global lifestyle brand, well, that’s because he is.

“Turning this into a global lifestyle brand is a huge goal,” confirmed the brand’s president, April Hennig. “We look forward to that, with a huge retail presence around the globe.” She joined the team in August 2015, leaving her post as vice president and divisional merchandise manager of contemporary 5F at Bergdorf Goodman to become Simkhai’s first president.

So what’s next in this global expansion plan? Well, aside from relaunching his website this week and debuting his first poster campaign in New York, he designer took a step towards accessories, in the form of a runway footwear collaboration with Manolo Blahnik. The slew of heels varied in style, from a thigh-high boot to a strappy sandal, each offered in a lush velvet.

“We’ve had other shoe collaborations in the past, but obviously Manolo is so luxury and the king of shoes. Being able to work with them, with no limitations, was really fun,” admitted Simkhai. While this will footwear collaboration will likely be contained to the runway, the Fall/Winter show be used as a platform for the designer’s expansion into denim. He first put his spin on embellished jeans for Spring 2016 and incorporated a few more pieces in Pre-Fall, but this will be his official push into the denim space.

“It’s reinterpreted denim, not basic denim,” Hennig insisted. “It was the first thing Gigi Hadid requested to wear; Kylie Jenner wore it to our show and the editors and retailers all swooned over the tiniest offering. This is going to be a bigger statement.”

Simkhai’s attention to detail will certainly not be lost on this category. “The denim is made in California. And after we make the jeans, we wash them, take them apart, embroider them and reassemble them. It takes like a month to put them all together,” he explained. And after seeing a chain festooned pair of pants, slashed and studded in various forms of gold, we can confirm that this is certainly not a shy introduction to the category.

But that’s ok, because this season Simkhai wants women to feel empowered by his designs. “Feminism is on the top of my mind. Obviously fashion is a business and we make the clothes to sell them and to dress women, but if we could put a message out there, I would say that feminism and women’s choices is most important.”

At Simkhai’s show on Saturday night, he made that message loud and clear. It went beyond the white t-shirts that each front row attendee received, which read “Feminist AF,” (and the $5 he donated to Planned Parenthood for every seat in the fashion show)

but could be found in an overly embellished denim jacket worn as a dress or the eccentric lace bolero worn by Romee Strijd to open the show. Alongside strong women, Simkhai was inspired by the “interiors of Spanish churches and cathedrals,” which of course alluded to a few over-the-top Gaudí references.

With frills abound, on leather and lace alike, plus more chains and sparkly embellishments than you can count, Simkhai made a solid point this season: it’s possible to look pretty and be powerful, at least in the right outfit. 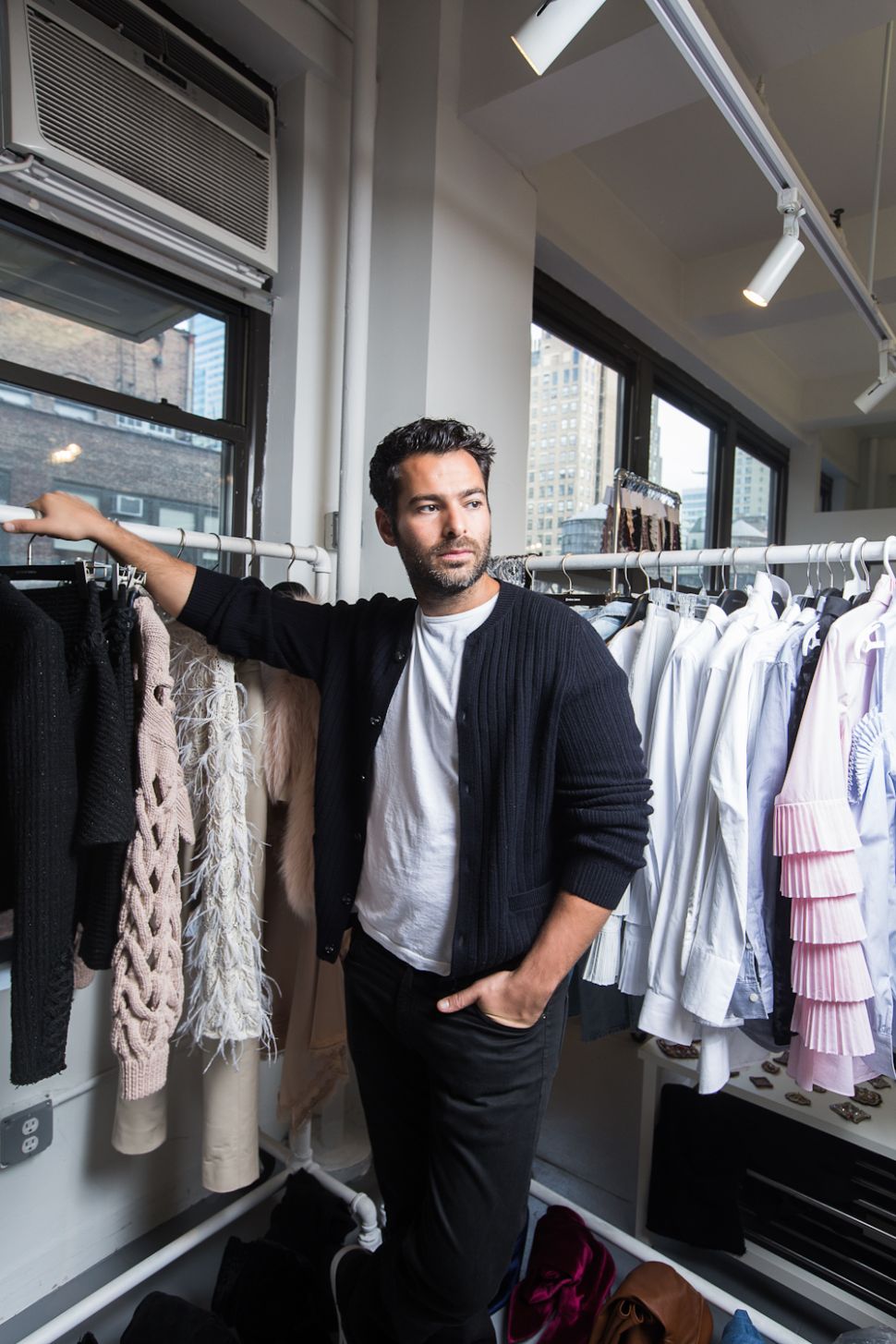