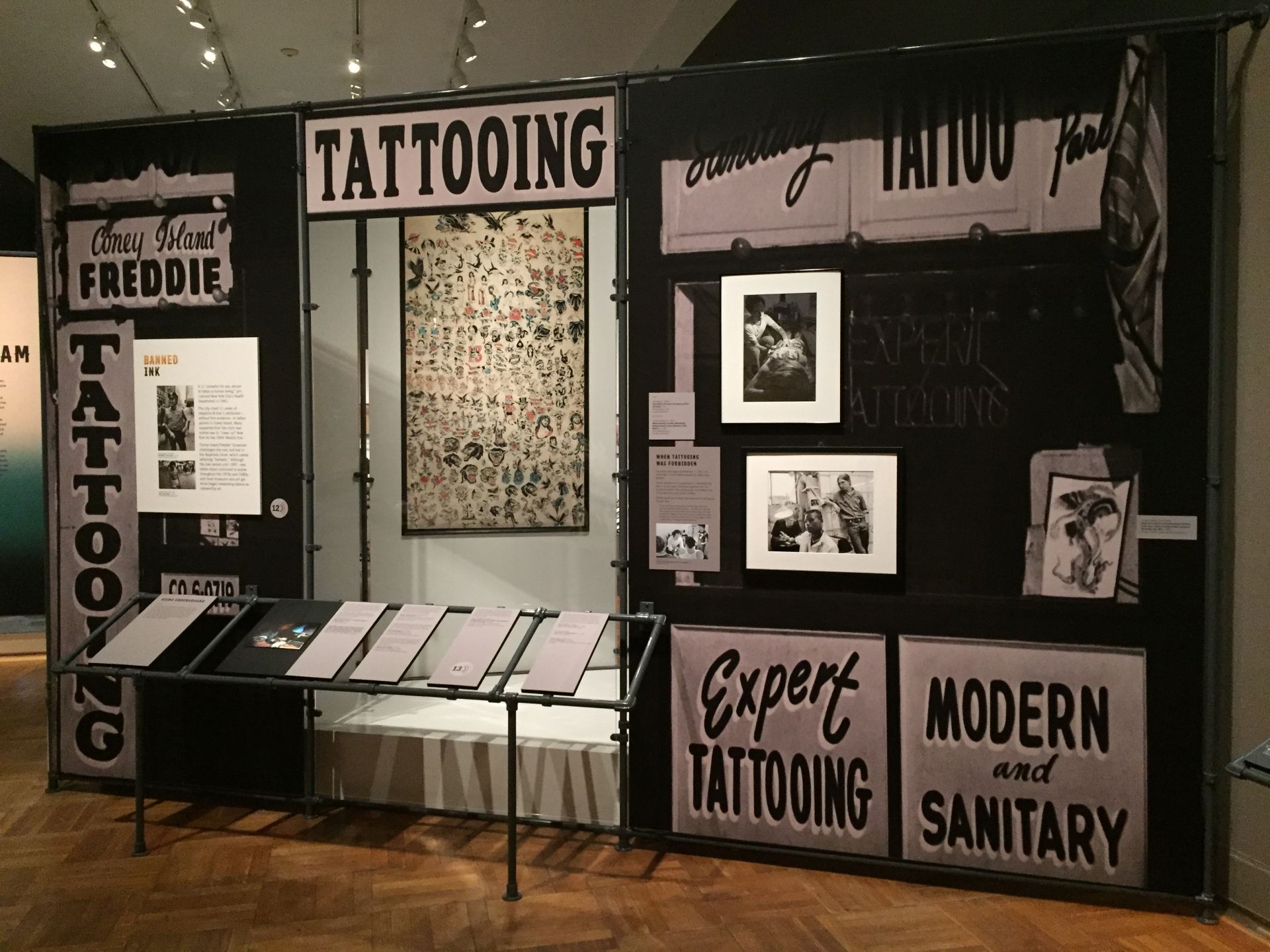 "Tattooed New York" is on view at the New-York Historical Society on February 3-April 30.
Alanna Martinez 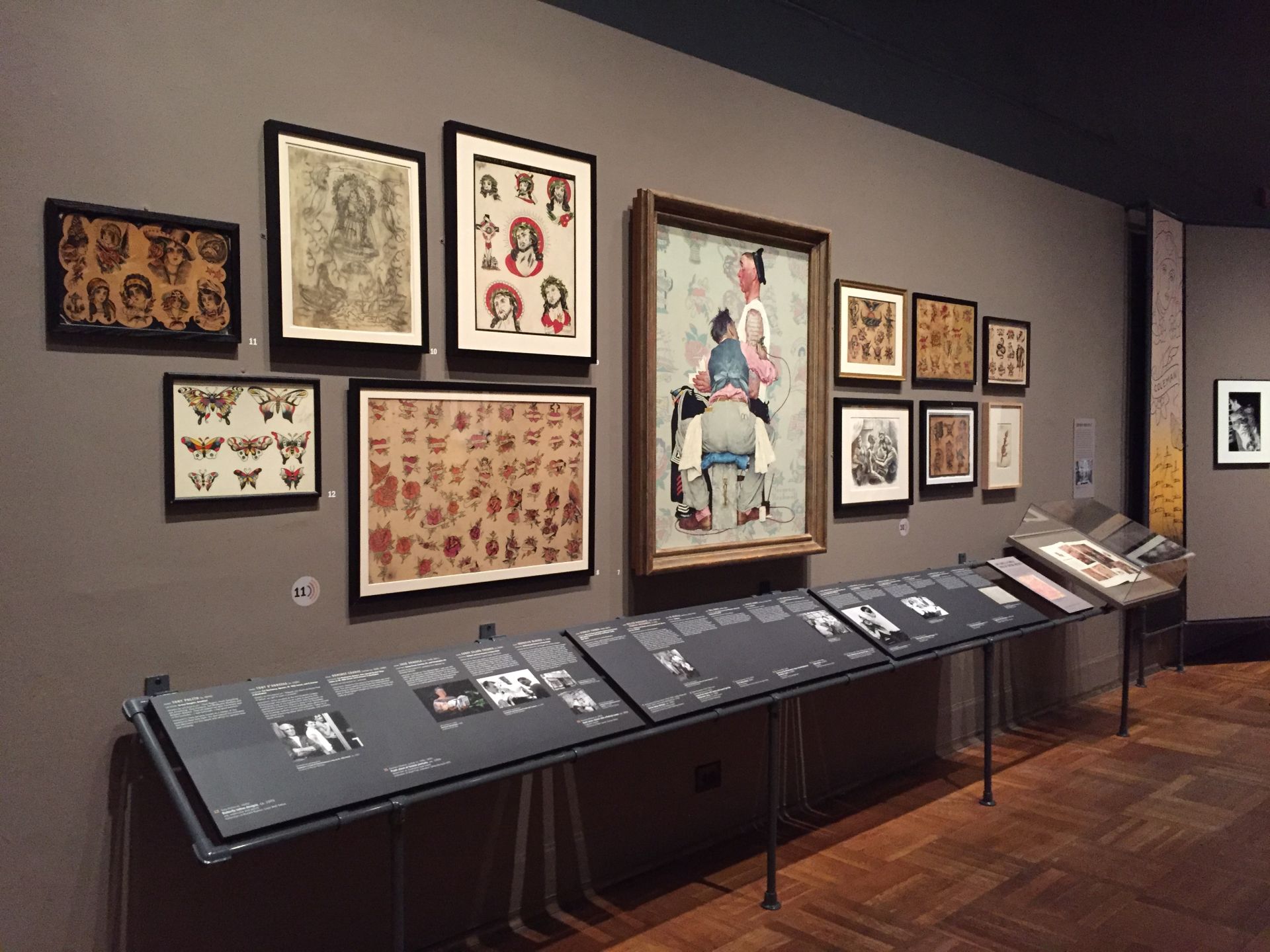 A display charting the lineage of artist apprenticeships and Norman Rockwell's The Tattoo Artist, 1944.
Alanna Martinez 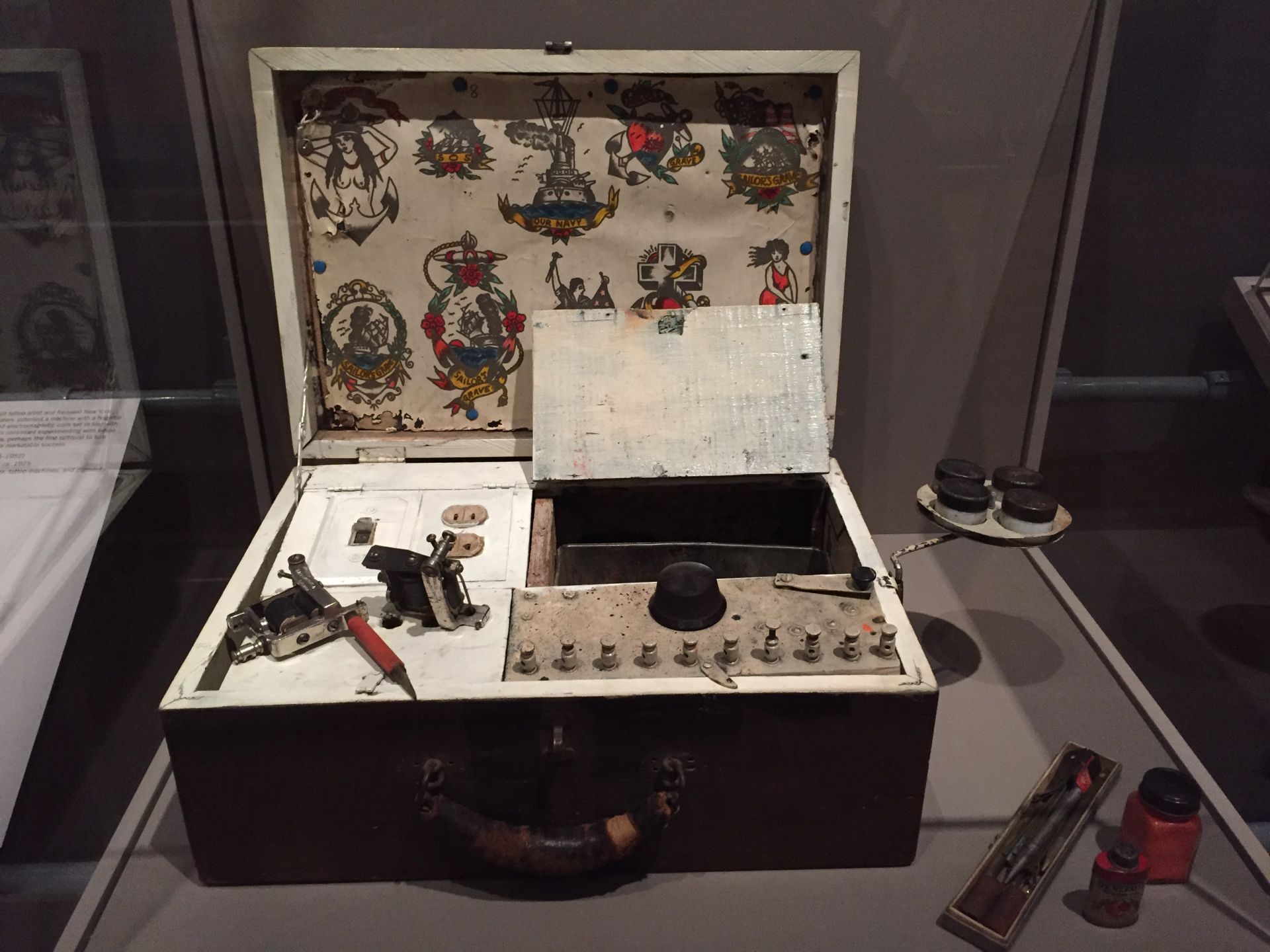 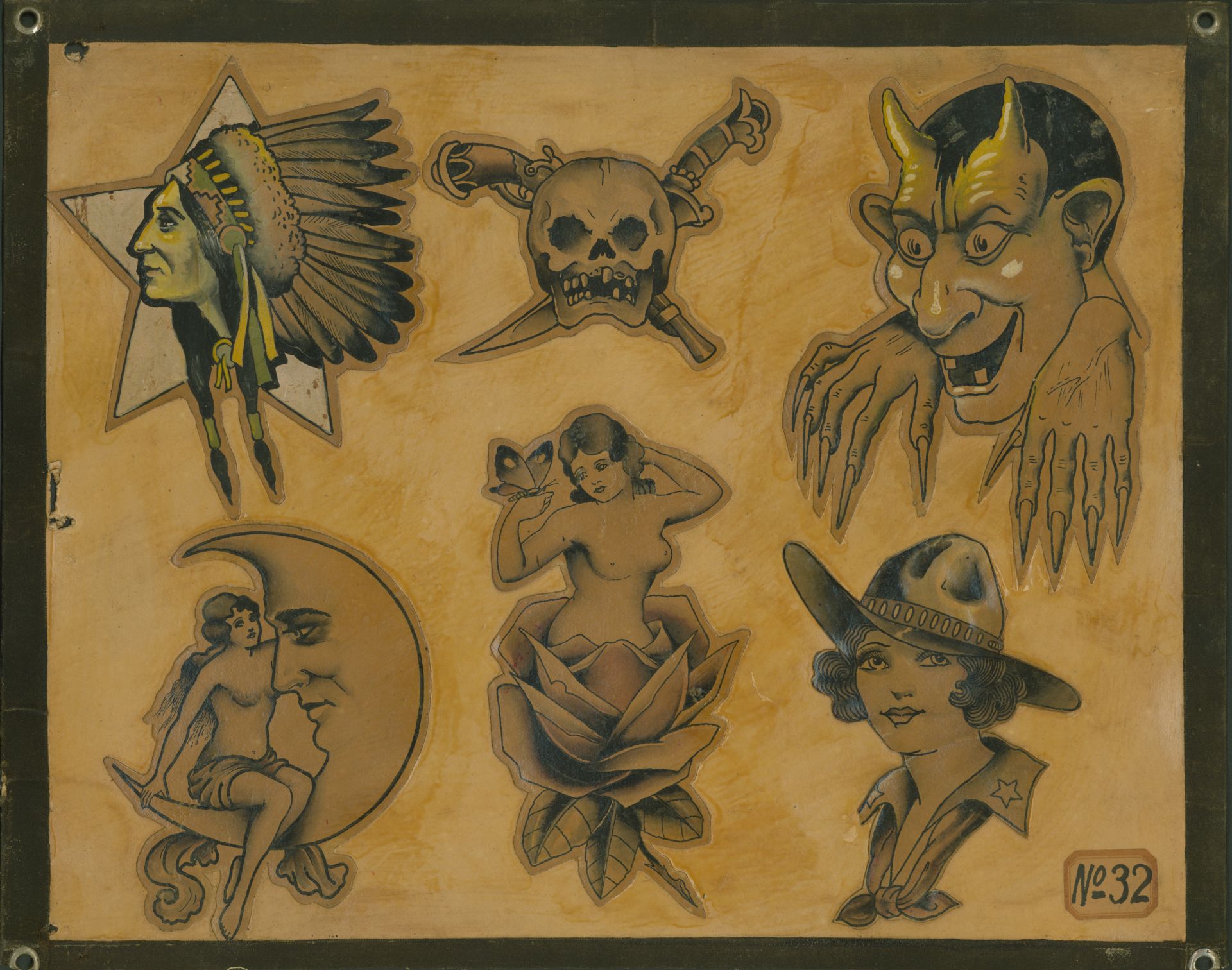 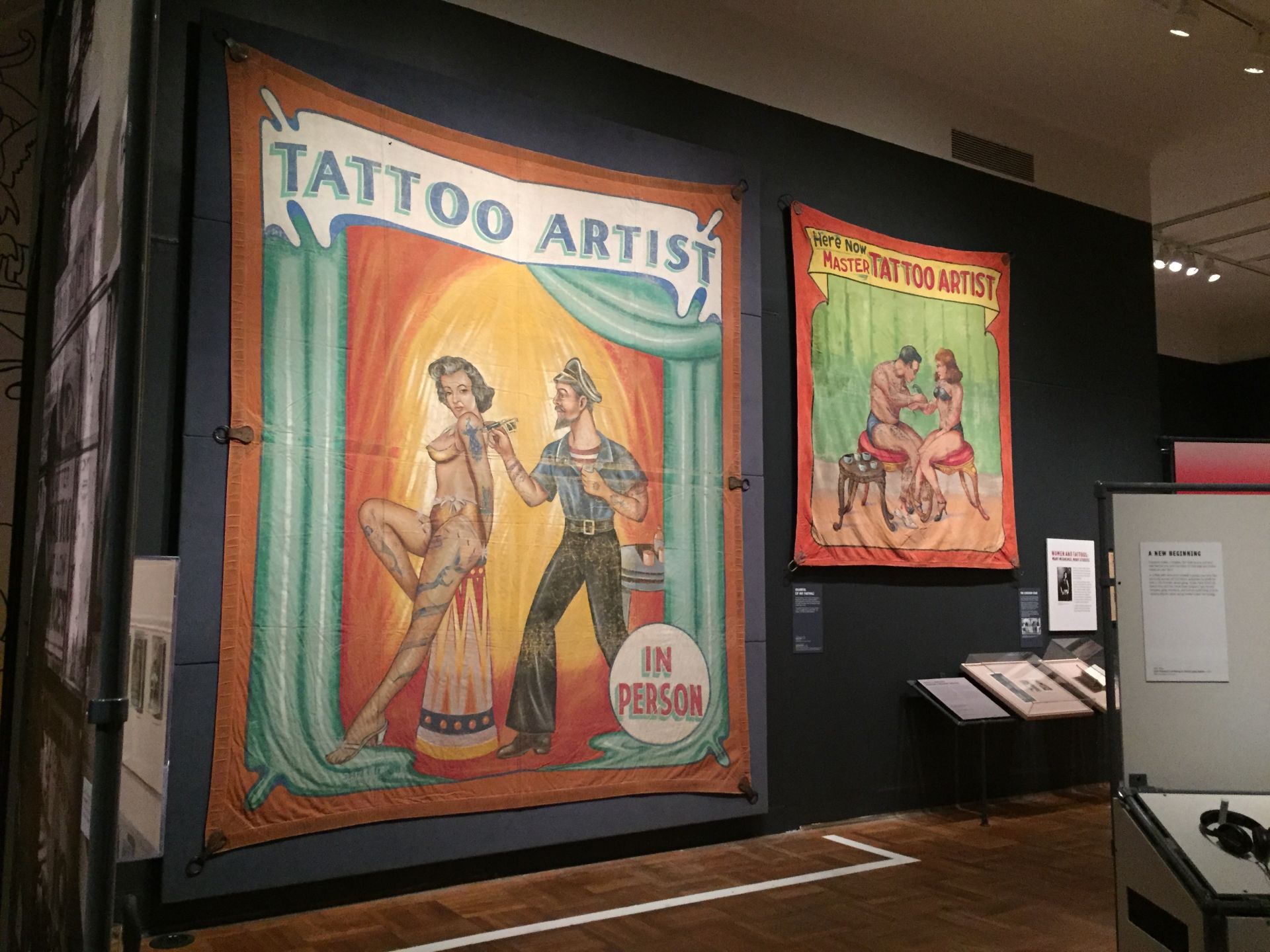 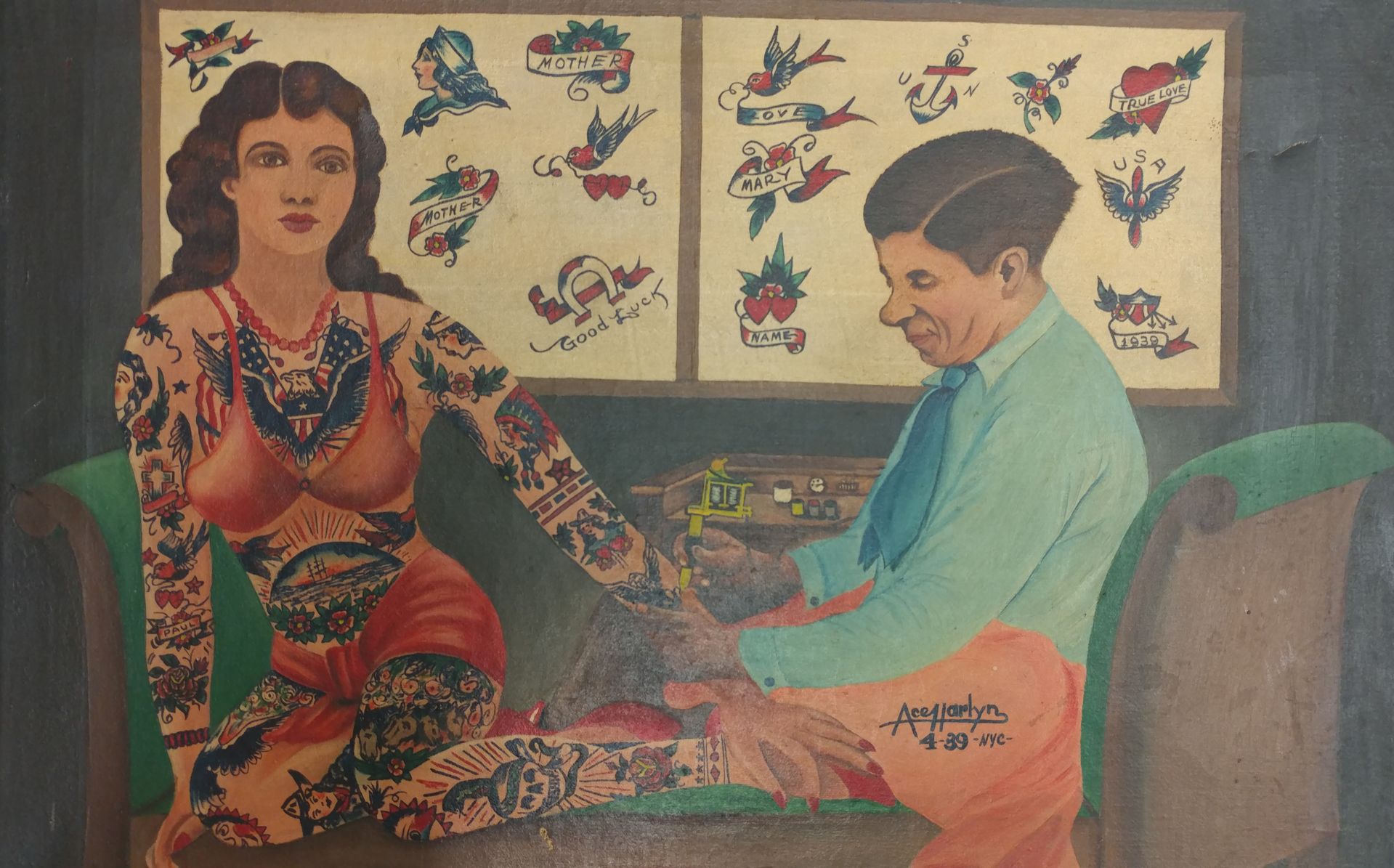 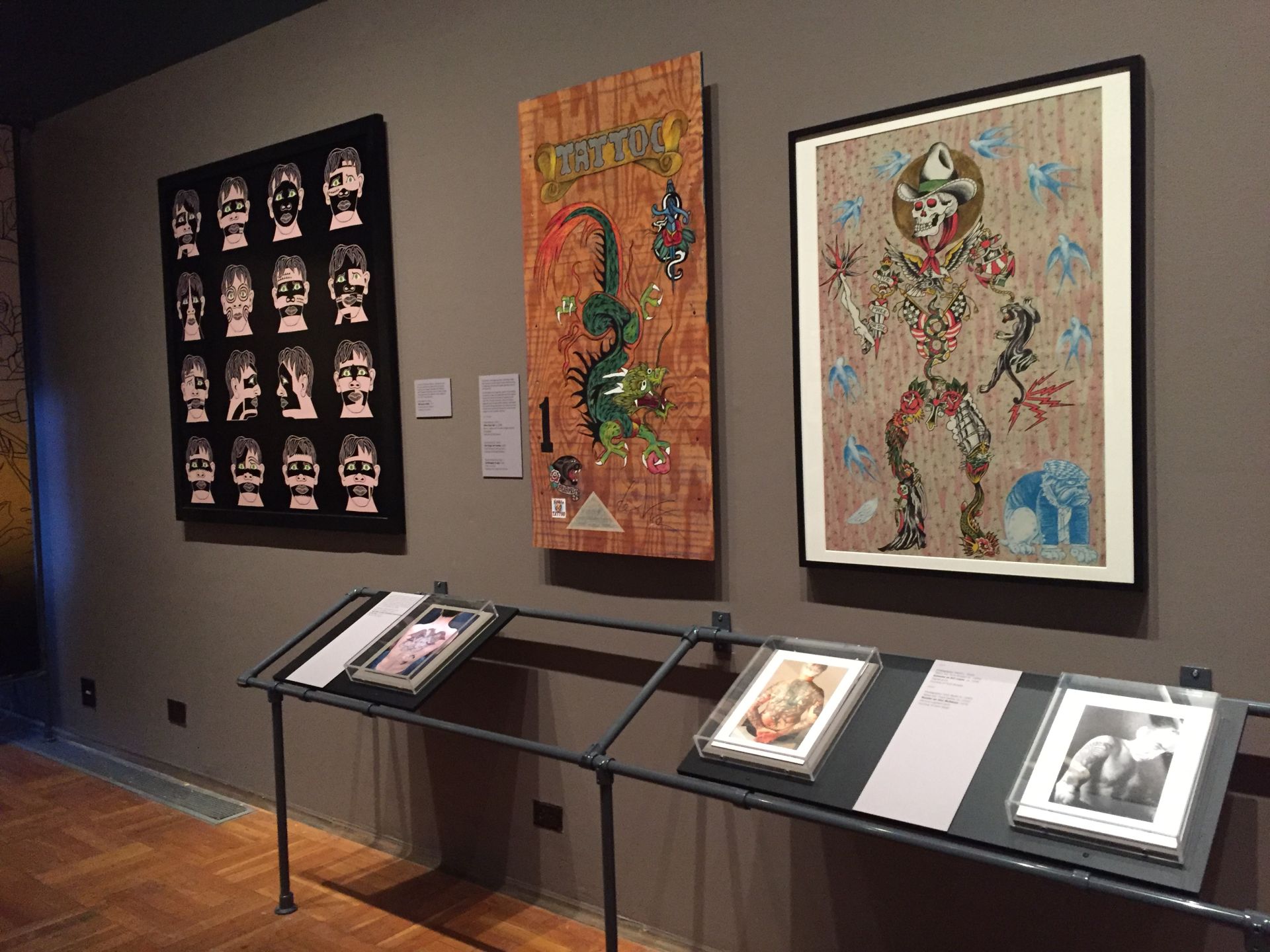 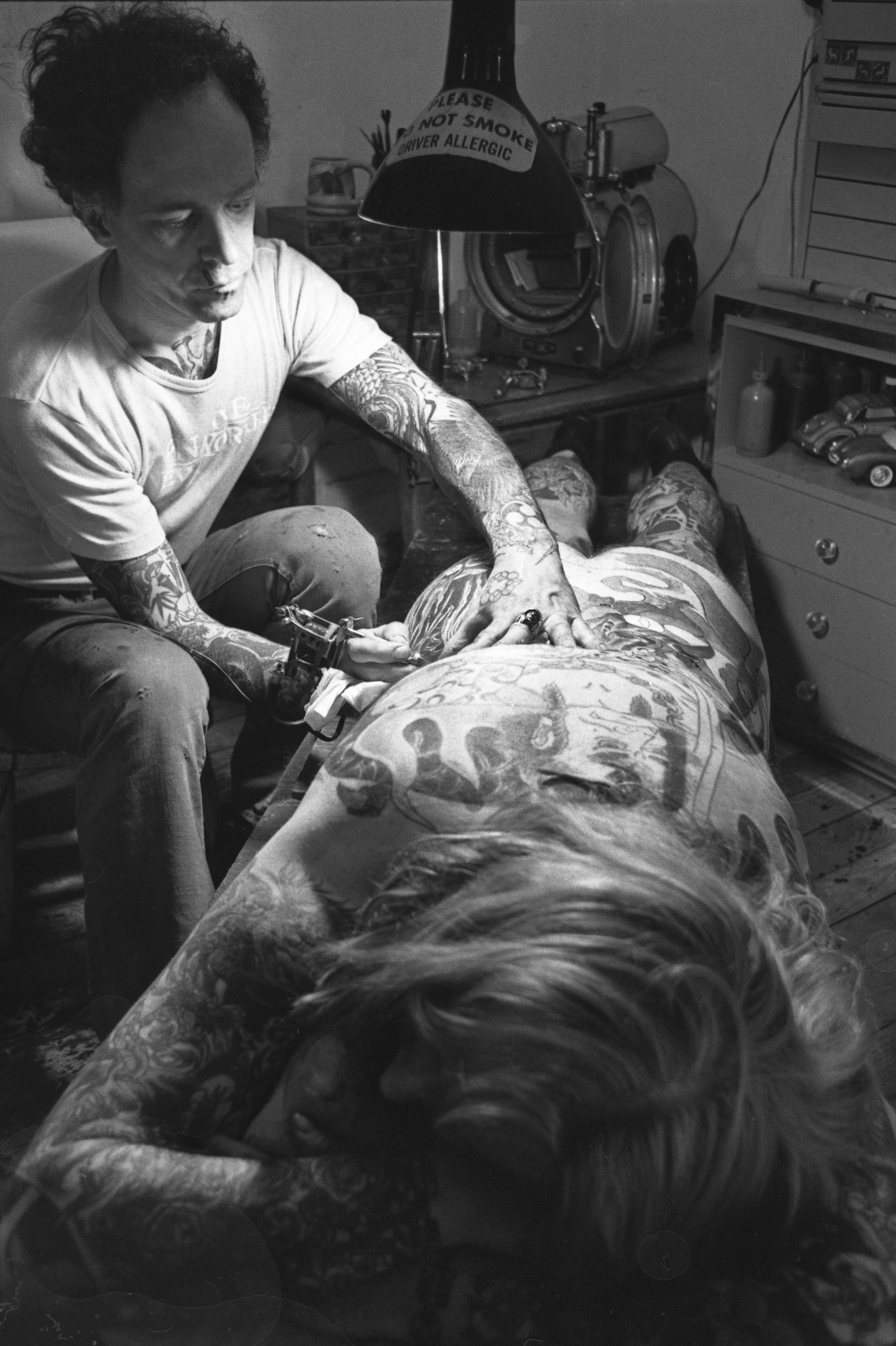 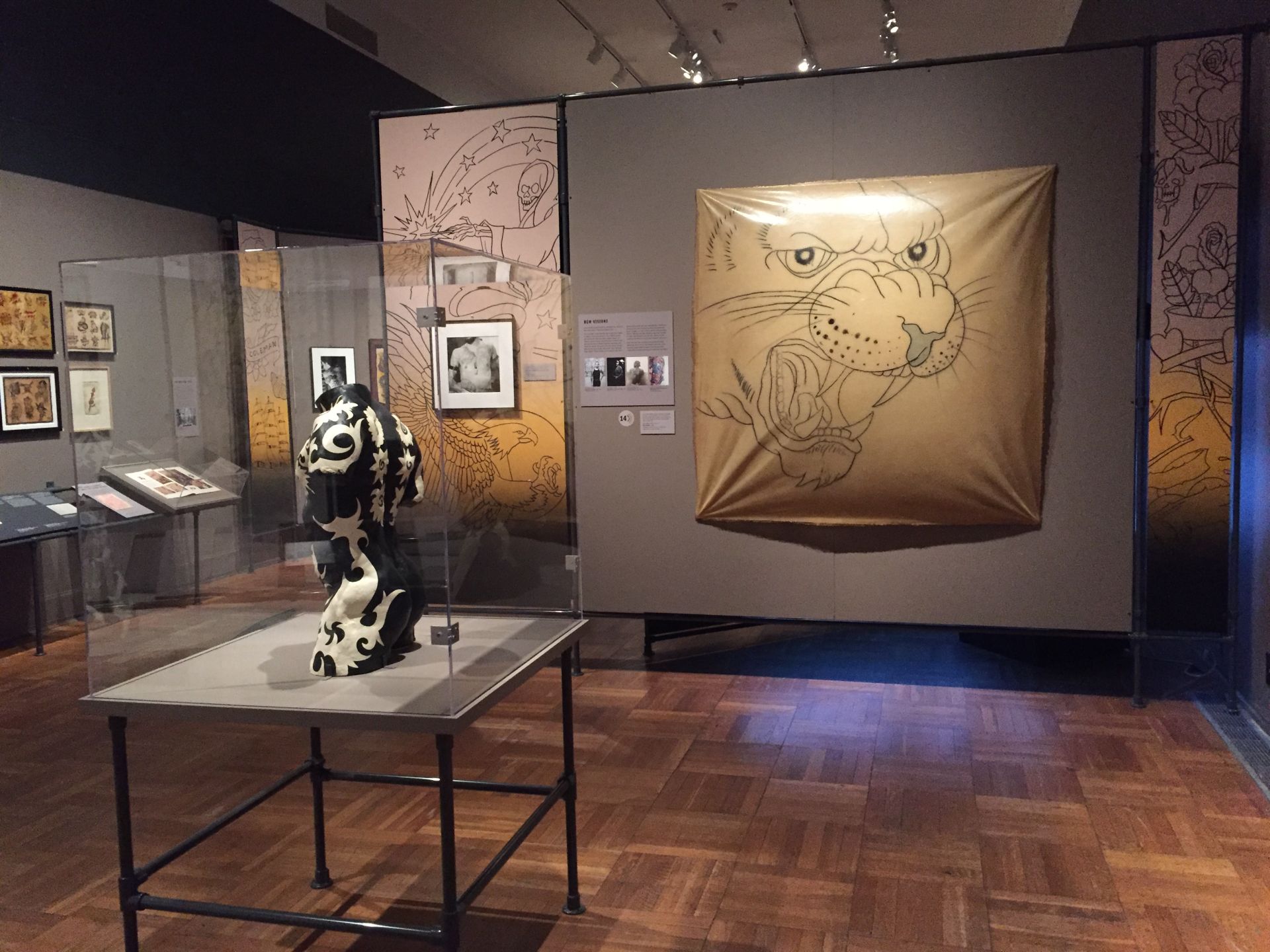 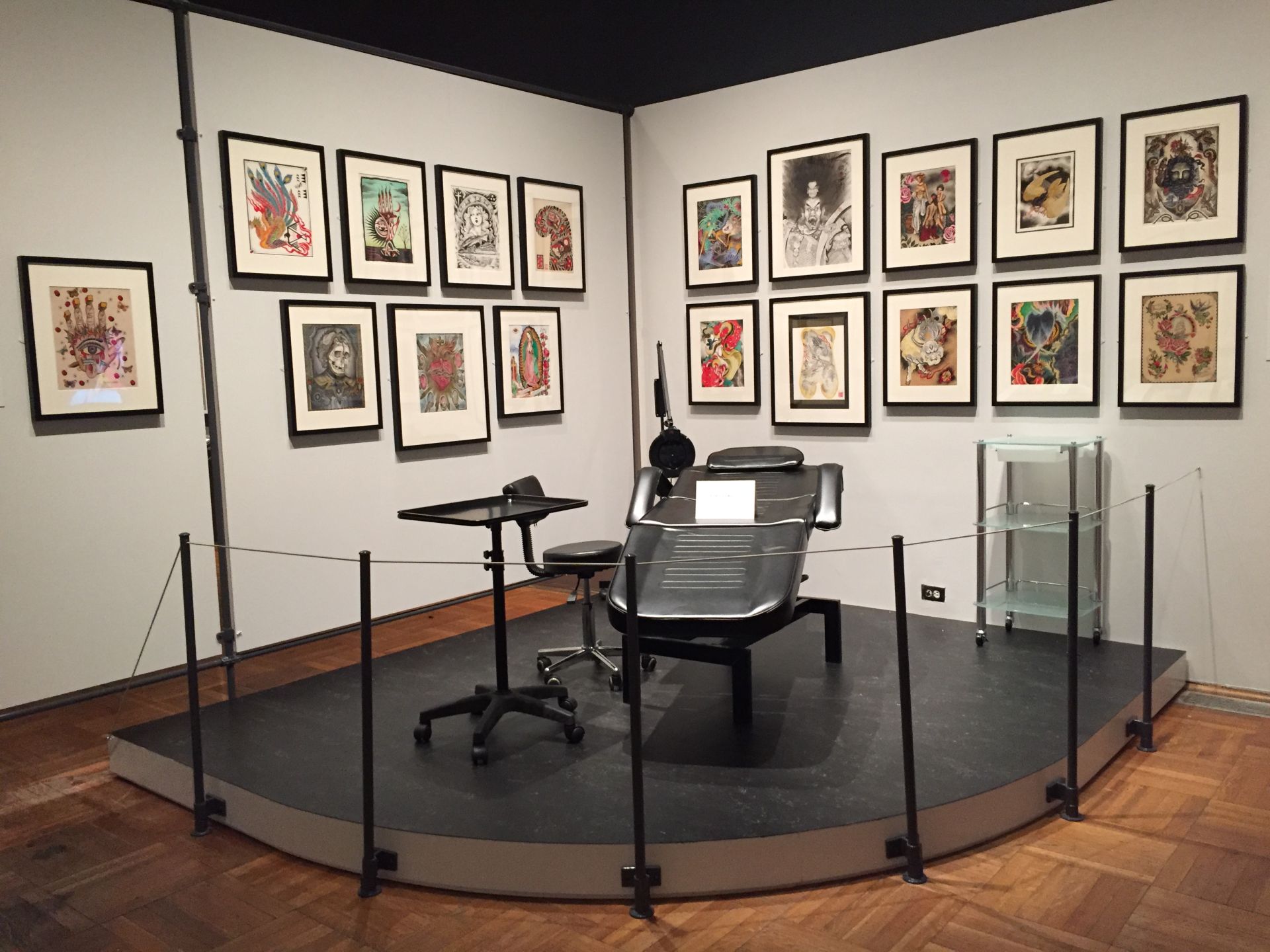 Organizers have set up a booth for artists to tattoo clients on site at the New-York Historical Society.
Alanna Martinez 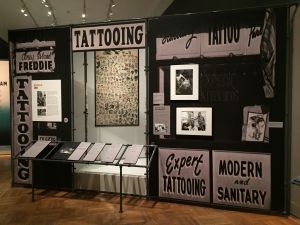 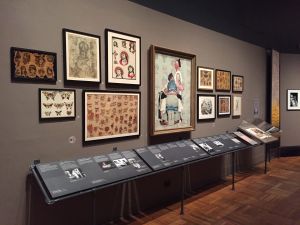 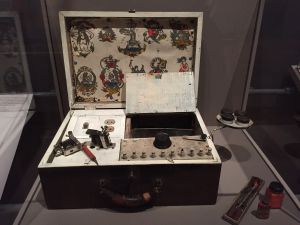 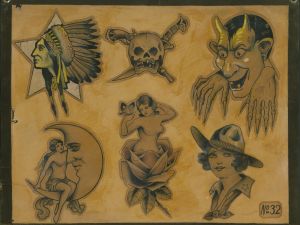 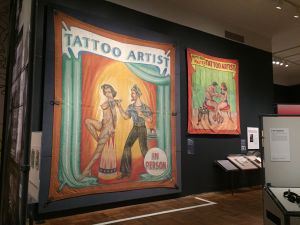 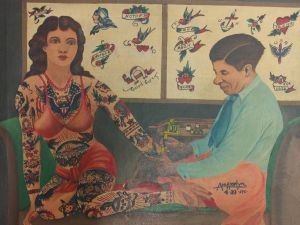 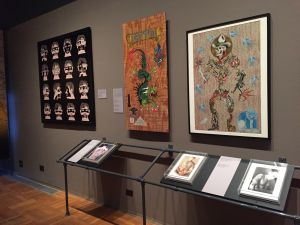 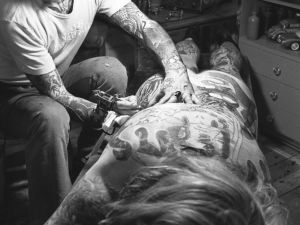 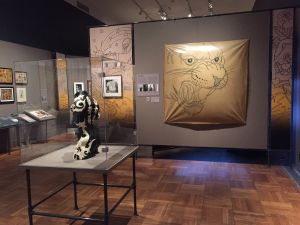 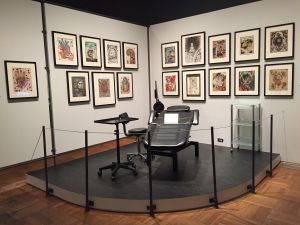 I had no idea when I walked into the New-York Historical Society’s ambitious new survey on tattoo history that I’d come away learning something completely new about the Manhattan neighborhood where I grew up. As it turns out, from the mid-19th century until 1961 the Bowery and Chatham Square on the Lower East Side was the bustling hub of New York’s burgeoning tattoo scene. Today, the area is widely recognized as the birthplace of modern tattooing. Inside storefronts, makeshift studios shared with barbershops and in some cases even flop houses, artists such as Samuel O’Reilly, “Electric” Elmer Getchell, Charlie Wagner, Lew “the Jew” Alberts and Bill Jones transformed a once underground craft into what is now a worldwide, mainstream artistic movement.

“Tattooed New York” (open through April 30) takes viewers on a sweeping journey through the history of the art form, beginning with the traditional hand-poked designs worn by New York’s original Native American population. John Verelst’s 1710 paintings The Four Indian Kings, of which the show features a series of mezzotint reproductions, are some of the earliest Western depictions of Native American designs and are shown alongside an assortment of natural pigments and implements used for creating hand-poked tattoos.

Highlights from the sprawling show, which attempts to cover a tremendous amount of territory in a limited space, include a helpful display charting the direct line of influence, from style to technique, that the city’s pioneering artists had on the careers of subsequent generations through apprenticeships. Martin Hildebrandt, who is believed to be the first American tattoo artist passed on his know-how to Sam O’Reilly, who later went on to patent the earliest design for the electric tattoo machine, based on a modified version of Thomas Edison’s electric pen. A case featuring an assortment of tattoo machines, including homemade devices and a DIY traveling kit made by Percy Waters, are shown alongside products made by Spaulding and Rogers, the first company founded solely to produce tattoo supplies. The mechanical conveniences that sprung up along the city’s vibrant entertainment corridor were, at one point, all the rage among the aristocratic class. It was not until well into the 1950s that the art began its association with the anti-establishment, and when the practice was banned in 1961 (it only became legal again in 1997) it went completely underground.

A large section spotlights the significant contributions women have made to the art form, from the appearances of “tattooed lady” performers at circus shows during the 19th century to the first woman to own a tattoo shop on The Bowery, Mildred Hull. This information is nicely balanced out in the exhibition’s final room, which features the art of contemporary tattoo artists—many of them women—like Amanda Wachob, Stephanie Tamez and Virginia Elwood.

As evidenced from the diversity of the designs on view, both drawn and painted on Flash sheets (ready-made designs displayed on shop walls for walk-ins to choose from) and documented on clients’ bodies in photos, the quintessential “New York style” of tattooing has been influenced greatly through the years by the multicultural nature which makes up the city. “The New York style is derivative of lots of different artistic influences around the world at this point,” said New-York Historical Society assistant curator Cristian Panaite.

But if you had to sum up New York’s distinctive style, it is today known for its thick black outlines and boldly-shaded colors, but its roots can be traced far and wide. The nautical influences of transient sailors are represented in 18th century examples of scrimshaw art, as well as painted samples of now-iconic designs such as the anchor and star. Many images popularized during the war era of the 1940s, such as the Rose of No Man’s Land, the Eagle and the American flag, were imbued with a strong sense of patriotism, and still remain some of the most popular and recognizable symbols circulated among tattoo enthusiasts. Artists such as Norman “Sailor Jerry” Collins and Don Ed Hardy are credited with bringing traditional Japanese techniques and designs to America, and Thom deVita expanded the scene’s lexicon to include Zuni Indian imagery.

“Tattooing is an art form like any other and gets its strength and beauty from various other art mediums,” said Panaite. The has gone to great lengths to draw parallels between the history of tattooing and the various cultural trends and social issues that have fueled its evolution, from the growth of the fashion industry in the 1920s and 30s to trade magazines like Tattoo and Outlaw Biker which helped visualize the art form for a national audience. Inspired by his research, Panaite himself has now gone under the needle twice, most recently on New Year’s Eve 2016 when he recruited artist Mehai Bakaty to tattoo the date he became a naturalized American citizen on his leg.

So whether you are tattooed or not, and even if you’re not a native New Yorker, the museum’s survey opens an accessible and engaging window into what has been, at different points in history, an otherwise exclusive and obscure subculture. Ultimately, “Tattooed New York” is less about tattoos than it is an artistic movement that has touched nearly every corner of society and outgrown its humble roots on the Lower East Side.