Some boutique fitness classes might be known for using teeny, tiny weights, but elsewhere, women lifting heavy weights is a major movement. Just look at Instagram, where young women are attracting thousands of followers by posting how-to guides in the weight room. It’s more than likely that your Instagram feed has a few appearances from women who usually wouldn’t be caught deadlifting or hoisting barbells overhead.

Boxing might be the current workout of choice for Victoria’s Secret Angels, but lifting is now embraced by actresses (and a few Angels, too). Celebrities are picking up heavier weights, from Emma Stone preparing for La La Land to Kate Upton, who opened up to People about how strength training changed her body. While they probably won’t become competitive powerlifters, it’s an effective way to prepare for a role quickly. Both offer definitive proof that lifting heavier weights does not lead to bulking up like The Bachelor’s Chad Johnson overnight (as long as you avoid protein powder).

Kate Upton (@kateupton) crushes some heavy landmine bench squats with great technique. Strong! Taller lifters, and particularly those with proportionally longer femurs, tend to struggle to stay upright with traditional squats and often default to folding forward, which puts a lot of undue strain on the lower back. Using the landmine helps to stay more upright to protect the lower back, and the arc of the bar helps encourage more of a posterior weight shift to work the glutes more while also taking stress off the knees. As an added bonus, loading in this manner is also a great way to work the anterior core and upper back. Squatting to a bench serves the dual purpose of being a depth gauge to ensure a full range of motion while also helping to aid with form.

Upton works with with Ben Bruno, who also trains Chelsea Handler and models Nadine Leopold and Barbara Fialho (and oddly enough, Sheldon from The Big Bang Theory). One look at Instagram proves that his digs are decidedly low-key, especially compared to more upscale gyms other celebrities frequent. If you’re not looking for a personal trainer, consider lifting heavier weights in a group setting. At Barry’s Bootcamp, men and women work with much heavier weights than a basic cardio class.

Barry’s instructor Alycia Stevenin tells first-timers to keep two sets of weights handy, to easily switch to lighter ones. “It can help to mentally power you through the workout routine if you know you have a ‘safety net’ in a lighter set of weights,” she explained. Stevenin found the stigma against lifting heavier weights has started to fade, especially once people realize that cardio classes alone might not lead to the physique they want.

Barbara Fialho (@barbarafialho1) crushes this awesome hip thrust variation where you perform a controlled band abduction at the top of each rep. Strong! 💪🍑 The glutes are responsible for hip extension, abduction, and external rotation, and this exercise trains all three functions at once. I'm a stickler for pausing hip thrusts at the top, so adding in the band move forces you to "own" the top position even more. Translation: #datass

“Cardio’s great for torching calories and slimming down, but it must be paired with strength training to get the lean, slim, toned look you’re going for. Incorporating heavy weights into your routine will help you reach fatigue, producing fat burning and muscle shaping results more quickly,” she said. So grab some weights and the Sports Illustrated swimsuit issue, which should assuage any leftover fears related to bulking up. 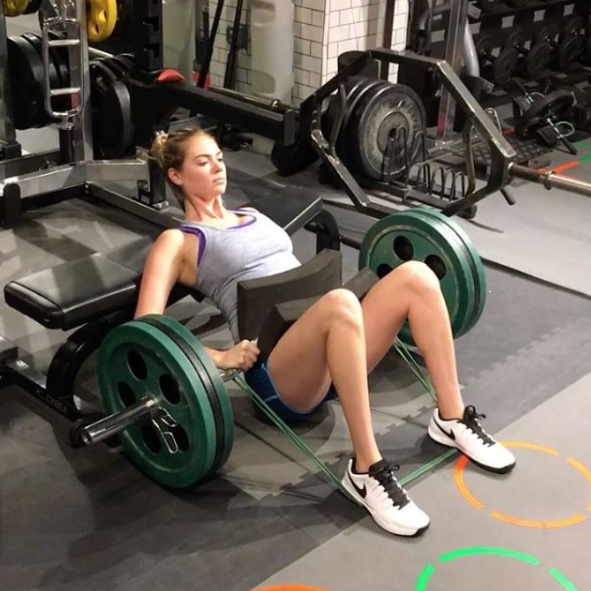