Our first suitor called us in the spring. They offered to pay for coffee. It was our first date. I had butterflies in my stomach. They promised they’d done this before and that I shouldn’t be nervous.

I could tell they were experienced. Their smile was soothing.

They looked me in the eyes. They wanted our pitch deck. “Do you use protection?” I asked. “No.” I knew it was dangerous doing it without protection. But it was so tempting. I was excited. I wanted to get in their portfolio. I couldn’t resist. So I took a deep breath and slipped the deck in. “Is it in yet?” I felt naked. I didn’t care. Maybe this was the one, I thought. Maybe they’ll actually call me back after this meeting. Maybe they’ll invest.

But the climax was premature. They quickly got dressed and downed their coffee. I guess they like to finish these things early. Strange.

They gave me their cards. They said they wanted to see me again. I blushed. We shook hands good-bye.

I looked at their cards. Darkness fell over. It read “Associate.”

I had just wasted my time.

Since then, I’ve learned. I say “no” to associates. They—along with most VCs—waste founder time. And it’s our fault. More on that below.

65+ associates and a handful of partners later and I’m still standing. I’ve been funded. But I’ve also been scarred. Rejected. Had my time wasted. My company secrets have been sent out to my competitors and there’s nothing I can do about it. All I can do is continue to try to please them. But I could have been more strategic. Approached meetings better. Left off less residue.

Now I’m going to let it all out. I’m going to give power to the startup community. Here’s how to deal with VCs. How to know when you’re about to expose yourself to the things that can scar you and your venture.

No antibiotics or laser treatments. Just follow the approach.

Here’s what to do when trying to seduce a VC.

“It’s not unheard of for VCs to meet you when they have no intention of funding you, just to pick your brain for a competitor.” —Paul Graham

Simultaneously, they’re gate keeping. Associates open their gates to the partners if they’re aroused. But even if they’re turned on enough to spread their gates, partners don’t take associates seriously.

“And while [associates] may introduce startups they like to partners at their firm, the partners discriminate against deals that come to them this way. I don’t know of a single VC investment that began with an associate cold-emailing a startup.”  — Paul Graham [Emphasis mine]

If you see an associate, run.

I spend the first 20 minutes asking questions to VCs I’m meeting with to avoid the above. I want to understand if it’s worth my time.

“I wish more entrepreneurs actually spent time understanding the fund straight off the bat. As an investor when an entrepreneur asks the right questions it actually makes me think, ‘this person knows their stuff.’ It also turns the meeting into more of an even playing field.” —Nicholas Stocks, Principal at WhiteStar VC

Here are the questions I ask when looking for a suitor.

a) Are you an associate?

VCs have investors. They need to triple the fund by the end of the fund’s lifetime.

So the VC will invest in 100 startups. Getting a 20% stake in each. Hoping two or three exit at a billion. And voila, their business model.*

Well, they’ll expect you to hit a billion as well. Depending on your ambitions and market, that may not be viable. Depending on the size of the fund you can see what type of pressures you’ll be up against. Some of which can kill you.

Knowing the size of the VC’s fund gives you an idea of how the relationship will play out. Sometimes the size of the fund becomes irrelevant: AndreseenHorowitz and ProductHunt. But it’s always good to know.

c) What’s your average ticket? What were your last three tickets?

Most VCs don’t invest below 1 million. While there are some that focus on seed-stage, most are post-seed/Series-A, B focused.

Ask up front. Find out whether they’ll even consider investing in you. Otherwise, you’re just whoring yourself out.

d) What industry do you focus on? Why?

e) How do you make decisions?

The chase is fun. But no one likes waiting.

This will help you better understand your chances, the timeline of execution as well as the power the person holds.

This can be a massive time saver.

f) Are you an associate?

g) What percentage of your fund is invested?

Some VCs have several funds. They also have a due date by which they have to invest it all.

Don’t forget, VCs are human. Depending on the stage of the fund, decisions can be made rationally or completely irrationally.

But this can also hurt you. Because if it’s the end of the fund, they’re closing their last few deals and simultaneously raising money for their next fund.

Ironically, they become the ones pitching (or catching?) to investors, just like us startups (it’s a pretty perverted cycle) leaving less time for you.

This can be an advantage or a nightmare.

h) Which fund number is this?

Top VCs have different funds that are in different cycles. First funds are deployed differently than the second or third fund. How? Ask them. But if they have two or three funds, you’re quite lucky to be sitting across from them.

i) Do you have any companies that overlap with us in your portfolio?

Do research before the meeting. The VC should have companies that do similar things to you, otherwise you’re running after stupid money (stupid money works, but smart money goes a long way).

But still ask. Surprisingly, most VCs are ethical. They’ll give you a disclaimer at the beginning of the meeting that they have competitors in their portfolio company. If they lie that will stain their reputation, so most won’t. But some will keep quiet. So ask.

And if they do have competing companies, this is when you can leave out the bits and pieces that make you different. But chances are your “difference” is irrelevant.

It’s your approach to market that matters. So think hard about that instead. More on that below.

Never depend on one VC. Closing a round can take anywhere between six weeks and 12 months.

Why? Six weeks if it’s a small amount (seed-stage), they know you and love your team.

For a larger round, it takes eight months of follow ups and milestone updates. Two months for due diligence and meetings. And two months of term-sheet negotiation and signing.

IS THAT ALL I SHOULD KNOW?

“I’ll assert that market is the most important factor in a startup’s success or failure… The product doesn’t need to be great; it just has to basically work. And, the market doesn’t care how good the team is, as long as the team can produce that viable product.” —Marc Andreessen

Most won’t admit, but VCs don’t care much about the team. Even less for the product. They only care about one thing: market and traction.

It proves the market. And it proves that you know how to get traction. VCs just care about traction. Give them traction and they’re aroused. Everything else is irrelevant.

Have a scalable, server cluster, synchronous, Node.js app running on Linux with full API docs waiting to be deployed to all zero of your subscribers and users? Quit.

How much money you need to raise is 15–20% of your company. That’s industry standard. If a VC/angel is not buying that, your valuation is lower.

But whatever you do, don’t be an amateur. Never dilute more than 20% in a round.

I see this all the time. Startups give away 30% or worse 49% in one round (usually seed). But even if you retain 51% after the seed round, how much do you and your founders (don’t forget employee stock options) plan to keep by Series A? 30%? If you calculate what you got paid for your equity after a exit + your total startup salary, you’ll keep less than if you had a minimum wage job for the past 7 years. Get a real job.

This is also a red flag for VCs. They’ll questions your future drive once they realize your cap table is about to tip before a growth round.

HOW MUCH SHOULD I RAISE?

Don’t have a number.

Raise based on scenarios and who you’re speaking to.

We’re raising X, which will allow us to hire a friend and pay a few part-timers.

Give me wings: if we raise Y we can hire a whole engineering team and go to market in four months.

Who to tell X or Y? Angels fall into X. VCs fall into Y. Tailor the discussion based on who you’re speaking with.

“Can you send me your pitch deck?”

Investors who first ask for your pitch-deck never really wanted to meet you. And if they take the time to read it, they’ll misinterpret it. And if they really like you, they’ll pass it to their portfolio companies/your competitors.

“Why do investors ask for decks? The number one reason is to avoid a meeting. Since most founders won’t get the check from this specific investor, but most founders want to meet the investor anyway, the investor simply doesn’t have the time to meet. The investor’s way of avoiding the meeting is to ask for the deck.”  — Alex Iskold

Scared of saying no to the king of the jungle? Not sure what to do instead?

First get a meeting. They’ll ask for the deck. Send them screenshots of the product, traction figures and projections. Then they’ll ask: How did you get to that?

Then they’re all yours.

Now you have their full attention and full influence over their interpretation. You’re now in the position of power.

Then it’s about your execution.

But, ugh…when will the chase end?

Say “no” to associates. Even if you’re fundraising.

Say “no” to introducing yourself first. Ask questions instead.

“Why won’t you invest in me?” Find out. Maybe you suck. Then say no to your business.

This startup stuff is an emotional roller coaster. One day you’re on top of the world and for the next month you’re a feather duster. But I know that founders who really love what they’re doing wouldn’t trade these endless days of being a co-founding feather duster for anything in the world. Up against all the VCs, investor, product iterations, and failures, we stay determined.

All we have to do is learn how to say, no.

Luka Ivicevic is the co-founder and Head of Growth at Penta Bank in Berlin, Germany. You can follow him @lukaivicev or contact him at luka@getpenta.com 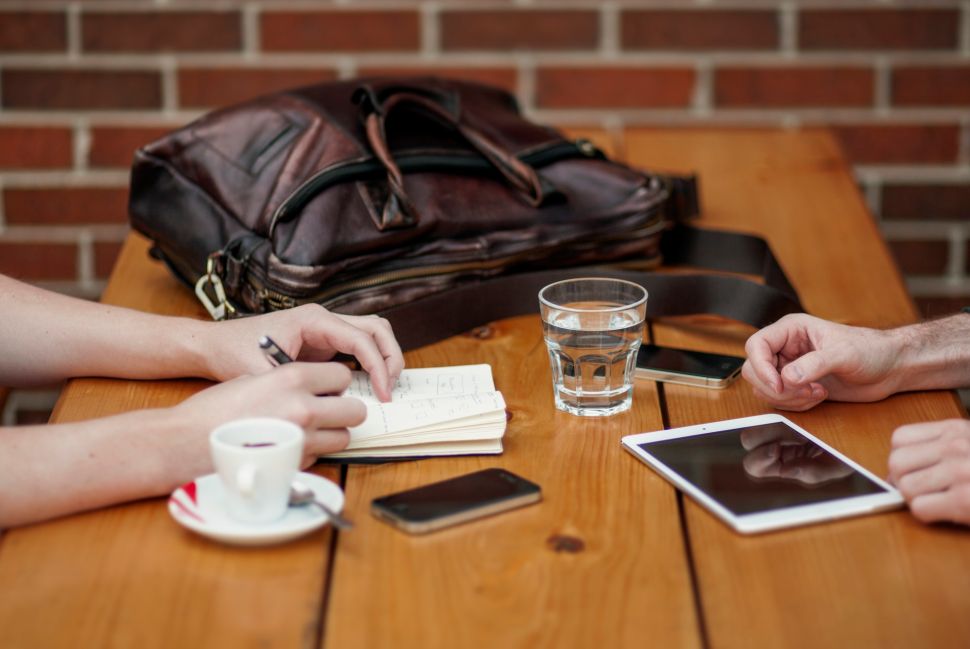