Ever since the Sexual Revolution in the early 1970s, where posing naked for photos and protests wasn’t uncommon, New York has witnessed a patchy but successful relationship between politics, art and fashion. This relationship came to the fore again this week in the Lower East Side at WhiteBox art space’s “Illegal Fashion Runway Show.”

Puntes, also the founder and art director of the WhiteBox art space, told Observer.com that the idea of the show came about as an instant reaction to President Trump’s travel ban. He said, “With Fashion Week coming along, Maria and I thought, ‘Why not put something together?’ I looked at the calendar and saw it was Valentine’s day. This is perfect! Bring your date to something significant.”

Attendance was high as many people choose to spend Valentine’s in the small space on 329 Broome Street. The metal folding chairs in the middle of the room were filled almost immediately as the audience packed in—some informed on  the nature of the event, others wandering in out of curiosity. The lights were dimmed, with the exception of colored spotlights aimed at the gallery’s white walls. The models, many of whom also identify with the artists’ cause, started filing out from the basement stairs and were greeted by applause as they made their way to the runway.

As a vocally illegal and undocumented immigrant educated in Yale, de los Angeles wanted to show that her people cannot be stereotyped as criminals. The concept and purpose of the show was to raise awareness of the contribution made by immigrants to the cultural life of the metropolis New York.  The artist strived to make her point,  “We (immigrants) are such a part of it(culture) at every level—whether you’re a studio assistant, designer at Fashion Week, or a seamstress somewhere—to the point where illegal immigrants like myself contribute to the art and design world in great amounts.”

De los Angeles, whose work was also the most celebrated in the show, described her work more as “art-fashion”, her dresses are made out of canvas and paper. She added, “My models are wearing paintings. These paintings have to do with identity, legality, what does it mean to wear stereotype and your culture on your body?”

American-Pakistani artist Qinza Najm took the performance art route, with her models—including a mother and child—walking in nude bodysuits and hijabs, holding signs that represented the seven banned Muslim-majority countries. After the show, the models allowed audience members to write messages regarding the ban on their bodies, with fabric markers.

Other designers in the show paraded wearable clothes that represented who they are as artists as well as their cultural roots—something that Illegal Fashion also celebrates. Aspiring Latina fashion designer Taliah Leslie showcased a collection of structured, borderline avant-garde, garments, while artist Ernesto Ortiz Leyva came out with simple printed shirts that read “Juarez El Paso” in reference to the Mexican border and his bicultural identity. As de los Angeles puts it, “Every day we dress, we make a statement about who we are.”

Spoken word poets brought interesting words and thoughts to the event, though the majority of the crowd, sadly, did not care to listen properly. Japanese poet Yuko Otomo refused to perform after she had spoken out, telling the stirring audience to “Shut up and listen!” adding that they would, if they truly cared for other people’s thoughts and ideas, as well as the cause. By the time the noise had dialed down enough for the poets to perform, the number of people present had also dwindled but the event remained a strong reminder of a crucial aspect of American cultural heritage and maybe even a kick off to what could become a new sideline to NYFW. 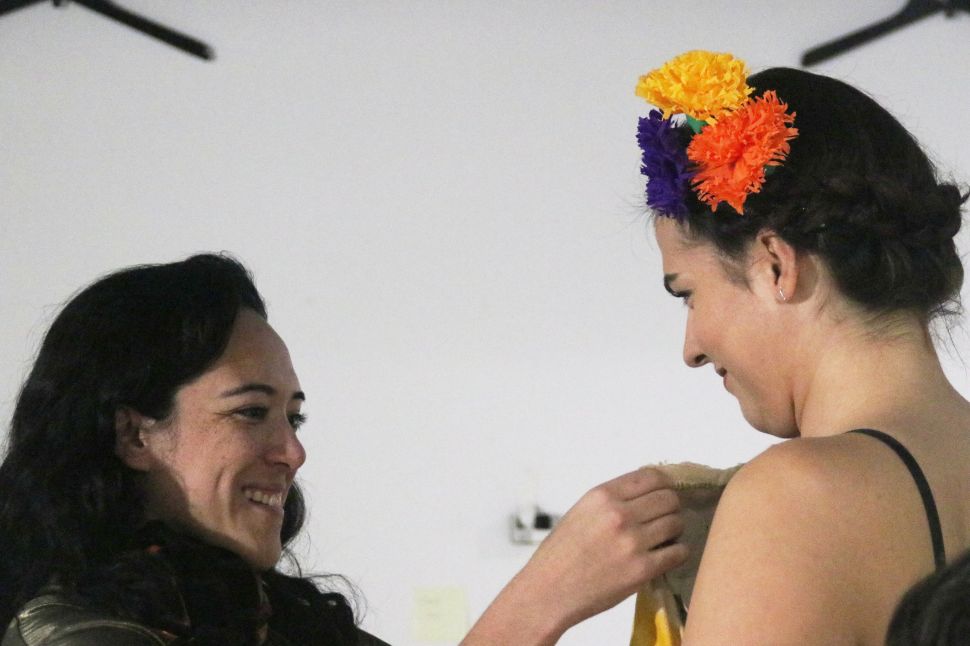