Immigration has become controversial around the world. The diverse views on the topic are tearing the European Union Apart and adding to the hostility of the American political dialog. Just like they did with Barack Obama, the US Supreme Court will almost certainly be reviewing President Trump’s immigration ban order.
The U.S. Supreme Court rarely goes out of its way to consider a Constitutional question not raised by the parties. However, when the justices addressed the validity of President Barack Obama’s immigration policy last year, they went straight to the heart of the matter — whether the President’s executive action violates his duty to faithfully execute the laws of the United States.

The Supreme Court granted certiorari in United States v. Texas on January 19, 2016. The suit revolved around guidance issued by the Department of Homeland Security (DHS) regarding a practice known as “deferred action.” The Secretary has the discretion to forbear, “for humanitarian reasons or simply for [his] own convenience,” from removing particular aliens from the United States.

As part of President Obama’s 2014 executive orders on immigration, the Secretary of the DHS issued a memorandum (Guidance) directing his subordinates to establish a process for considering deferred action for certain aliens who have lived in the United States for five years and either came here as children or already have children who are U.S. citizens or permanent residents. The new policy, known as DAPA (Deferred Action for Parents of Americans), sparked a flurry of lawsuits across the country, including suits by 26 states.
In its suit, the State of Texas sought declaratory and injunctive relief against implementing the Guidance. In granting a nationwide injunction that halted the enforcement of the DAPA policy, the district court and the federal appeals court held that the Obama Administration failed to comply with the Administrative Procedure Act (APA). Accordingly, neither court reached the constitutional claims raised in the challenge.

On appeal to the Supreme Court, the federal government presented the following questions: Whether a State that voluntarily provides a subsidy to all aliens with deferred action has Article III standing and a justiciable cause of action under the APA to challenge the Guidance because it will lead to more aliens having deferred action; whether the Guidance is arbitrary and capricious or otherwise not in accordance with law; and whether the Guidance was subject to the APA’s notice-and-comment procedures. The justices granted review on all of the above issues, but also asked the parties to brief and argue the larger Constitutional question: whether the guidance violated the Take Care Clause.

Under the Take Care Clause of the Constitution, Art. II, Sec. 3., the President “shall take Care that the Laws be faithfully executed.” The clause has been interpreted to mean that the primary responsibility of the President is to faithfully execute the laws passed by Congress. In enforcing the law, the Executive Branch must do so as exactly as Congress has detailed in law.

While separation of powers issues are relatively common, the Take Clause has not been frequently interpreted by the Court. In 1952, the U.S. Supreme Court partly relied on the Take Care Clause in Youngstown Sheet & Tube Co. v. Sawyer to invalidate President Harry S. Truman’s seizure of the country’s steel mills by executive action. “The President’s power to see that the laws are faithfully executed refutes the idea that he is to be a lawmaker,” Justice Hugo L. Black wrote. While Justice Black took a hardline approach, concluding that the president’s authority must stem either from an act of Congress or from the Constitution itself, Justice Robert Jackson’s concurrence adopted a more flexible framework that is more frequently used in executive power cases.

The Supreme Court often receives criticism for sidestepping complex or controversial Constitutional questions in favor of the easy way out. However, in this case, the justices were proactive in raising whether Obama had the authority to issue the Guidance in the first place.

While the Court received some backlash for its judicial activism, the question did not come out of nowhere. In fact, the Take Care Clause has been raised in a number of other lawsuit’s challenging the Obama’s Administration’s new immigration policy, although the not addressed by the federal courts. On a larger level, the Obama Administration’s widespread use of executive action as a means to sidestep an uncooperative Congress has raised questions regarding whether the President has violated his Constitutional duties under Article II.

Accordingly, the Court’s decision could dramatically reshape the doctrine surrounding executive action.
It is just a matter of time before President Donald Trump’s Muslim immigration ban gets a hearing by the nation’s top court. 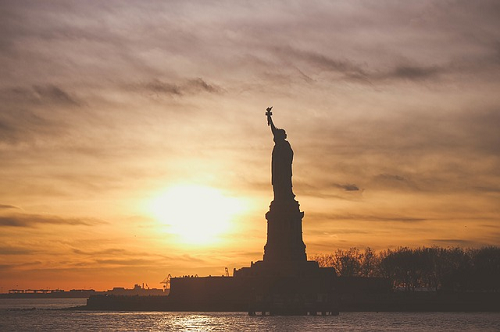