Not only is ISIS using social media to boost recruitment of terrorists, but it’s now also using video to spread its message. A prime example is a newly-released ISIS production documenting atrocities that the group committed in Egypt.

The 20-minute video produced by ISIS of Egypt contains footage of the massacre perpetrated by ISIS in a Christian Church in Egypt in December 2016. Thirty people were murdered and dozens of Egyptian Christians were wounded. Most of them were women and children. In the video, an ISIS terrorist proudly announces that their “favorite prey” is Christians.

The terrorist featured in this video is called al Musri, a pseudonym for “the ISIS everyman.” Al Musri simply means “the Egyptian” or “of Egypt.”

Coverage of this attack has been relatively scarce. Unfortunately, this isn’t surprising. ISIS and other murderous Muslims have massacred Christians on many occasions, and, time and time again, the world has remained relatively silent.

In the Middle East, there is an intrinsic hatred of Christians—especially when Christians are successful and occupy enviable positions in the social and financial strata of their communities. The Christian world widely disregards Egyptian Christians, because they are Coptic Christians—not connected to the Vatican or any other Western church. They look and act differently, they do not genuflect toward the West, and they have their own Pope in Egypt.

The Coptic Church of Egypt is one of a series of national churches or, as they are sometimes called, Eastern Churches. These churches are local, and few people in the world are interested enough in their welfare—or even in their deaths by massacre—to speak out for them. The Vatican and the leaders of almost every other Christian denomination have been relatively quiet on the topic. And if little was said, even less was done.

Of course, this all works to ISIS’ benefit. Christians—especially Christians of Egypt—are an important tool for ISIS, which targets them and uses them as a vehicle for recruitment. This video, much like a 2015 video of ISIS decapitating 21 Coptic Christians, takes place in an environment ripe with anti-Christian sentiment. There is a long history of Christian persecution in Egypt, and ISIS is capitalizing on an already fertile anti-Christian sentiment.

President al Sisi has symbolically mentioned Egypt’s Christians in his speeches and has paid visits to the Christian community during their festivals. However, he has yet to bring the force of Egypt’s police and army to their defense.

There are between nine and 10 million Copts in Egypt. They comprise about 10 percent of the total population and are the largest Christian community in the Middle East. Their churches have been burned and their people have been terrorized.

ISIS aims to recruit local Egyptians with its documentation of these attacks on social media. By attacking Coptic Christians, ISIS is appealing to all Christian-hating Muslims in Egypt. ISIS’ marketing strategy is, “We think alike, come join our mission.”

It is crucial that President al Sisi acts out against ISIS and the anti-Christian terror invading his country. The attack in December and the interest raised by the video undoubtedly succeeded in garnering ISIS additional followers.

ISIS is confident in its ability to recruit and execute terrorist activities, so it’s spreading its wings. Until recently, ISIS was content with their turf in the Sinai Desert and only periodically struck the major cities of Egypt. From there, they trained more recruits and struck Egyptian army targets and spies. It was in the Egyptian Sinai that ISIS downed a Russian plane packed with tourists.

Now, ISIS is rapidly escalating its activity. They even launched a set of rockets into Israel toward the southern city of Eilat that were intercepted by Israel’s Iron Dome anti-missile batteries. But the most significant change—and we learn this from the video—is that they are calling themselves by a new name. They used to call themselves, “ISIS of the Sinai Peninsula,” and they refer to themselves in the video as “ISIS of Egypt.”

President al Sisi needs to protect his country’s Christians. In doing so, he will prevent Egypt from falling to Islamic extremism. And the West needs to support his actions. 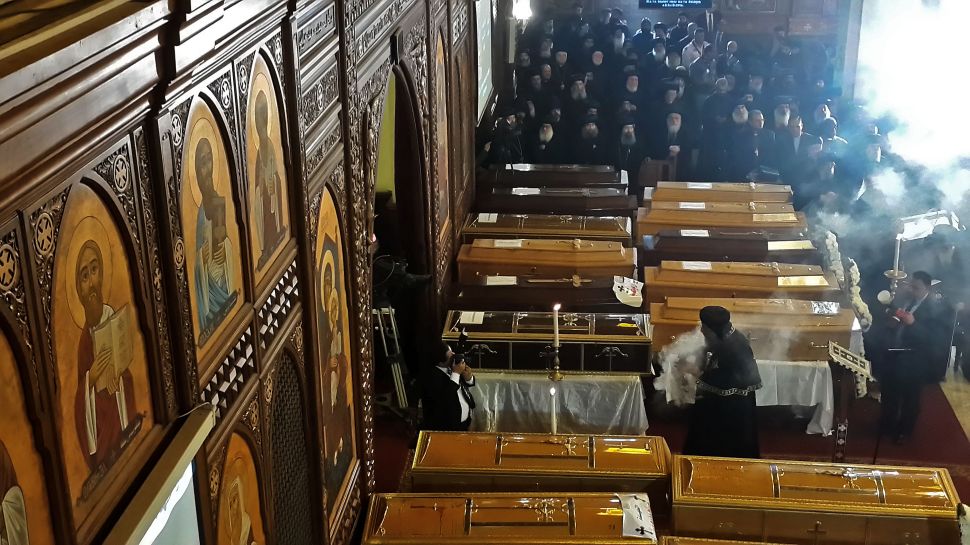