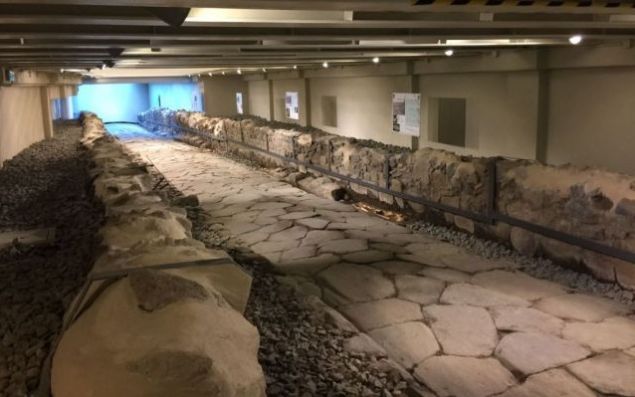 A 2,000-year-old stretch of Roman Road, which connects to the famous Appian Way, is accessible to restaurant-goers at Rome’s Frattocchie McDonald’s. Superintendency for Archaeology, Fine Arts and Landscape via Twitter

While burgers and fries still come cheap off the dollar menu, admission to see of the world’s most storied treasures in a museum can come at a steep price. However, if you’re a lover of history, Italy’s Frattocchie McDonald’s has got a whopper-sized, two-for-one deal just for you. Visitors who stop into the newly opened location just south of Rome will enjoy the unique experience of eating a Happy Meal above pristine remains built in the time of the ancient Roman Empire. Welcome to the world’s first drive-thru museum!

Frattocchie is the fast food chain’s first ever “museum-restaurant” according to Mario Federico, head of McDonald’s Italia, and the site features a view of a 150-foot stretch of 2,000-year-old cobbled street beneath a glass walkway. The road was first discovered during excavation for the restaurant in 2014, according to the Telegraph.

Exceptionally well-preserved stretch of Roman road opened to the public —
beneath a McDonald’s restauranthttps://t.co/kvfVJw5qGZ #Italy pic.twitter.com/norsLZNZe3

Digging up the stone street, scientists also uncovered the skeletal remains of three men (a fourth was found at a gas station adjacent to the site) who were believed to be interred after the road fell into disuse around the 3rd century A.D.

After studying and cleaning the ruins for a period of three years, archaeologists determined the road was once a branch of the legendary Appian Way, the Roman Empire’s most famous highway.

“We think it was a side road that connected the Appian Way to a settlement or maybe an important property such as the villa of a rich noble or an imperial estate,” superintendent of archaeology for Rome Alfonsina Russo told the Telegraph.

Visitors can access the road from the parking lot without entering the restaurant, and for those hungry for additional information plaques have been posted throughout the area in English and Italian.