Assemblyman Jack Ciattarelli has been using a classic longshot technique in his campaign for the Republican nomination for governor: challenge the frontrunner. This “always punch up” strategy has included challenging Lt. Gov Kim Guadagno to a series of debates in all 21 counties and calling her “embarrassingly dishonest.”

Now, he’s taken it to the next level.

On this morning’s chamber train, Ciattarelli’s staff handed out a mock CD called “Chamber Trip Karaoke” featuring songs designed to mock both Guadagno and Democratic frontrunner Phil Murphy. While there’s no actual CD in the jewel case, the song titles leave no doubt about the message. “Side A” is the “Silent Kim” side (CDs have no “sides,” of course, but it’s a funny rhetorical device). It features hits like “Enjoy the Silence” by Depeche Mode and “The Sounds of Silence” by Simon & Garfunkel, apparently referencing the LG’s lack of a response to issues Ciattarelli would like to see addressed. He even “goes there” in tying Guadagno to Christie’s greatest scandal by including a cheeky reference to Bridgegate with “Bridge Over Troubled Waters.”

Side B features “Mo Money Murphy” and includes digs at the personal wealth of the poll-topping Democrat. “All About the Benjamins,” “Money for Nothing” and “Moneytalks” are all represented, as well as the Weird Al parody “I Think I’m a Clone Now,” surely a reference to the similarities to Jon Corzine the eventual Republican nominee, whoever it is, will surely draw.

Guadagno isn’t taking the slight lying down. Through her spokesman, Ricky Diaz, the LG fired back at Ciattarelli, telling PolitickerNJ, “Leave it to a Trenton politician to give you a CD case with no actual CD inside. Clearly the Ciattarelli campaign is struggling to get attention with the polls showing them at only 2%. Kim has repeatedly said she looks forward to having debates and earning every vote, not buying them like Phil Murphy.”

Ciattarelli campaign consultant Chris Russell told PolitickerNJ, “As for the empty cd, they missed the joke. LG and Murphy all packaging, no substance.” He added, “How many more time will they say they want to debate before actually doing one?” 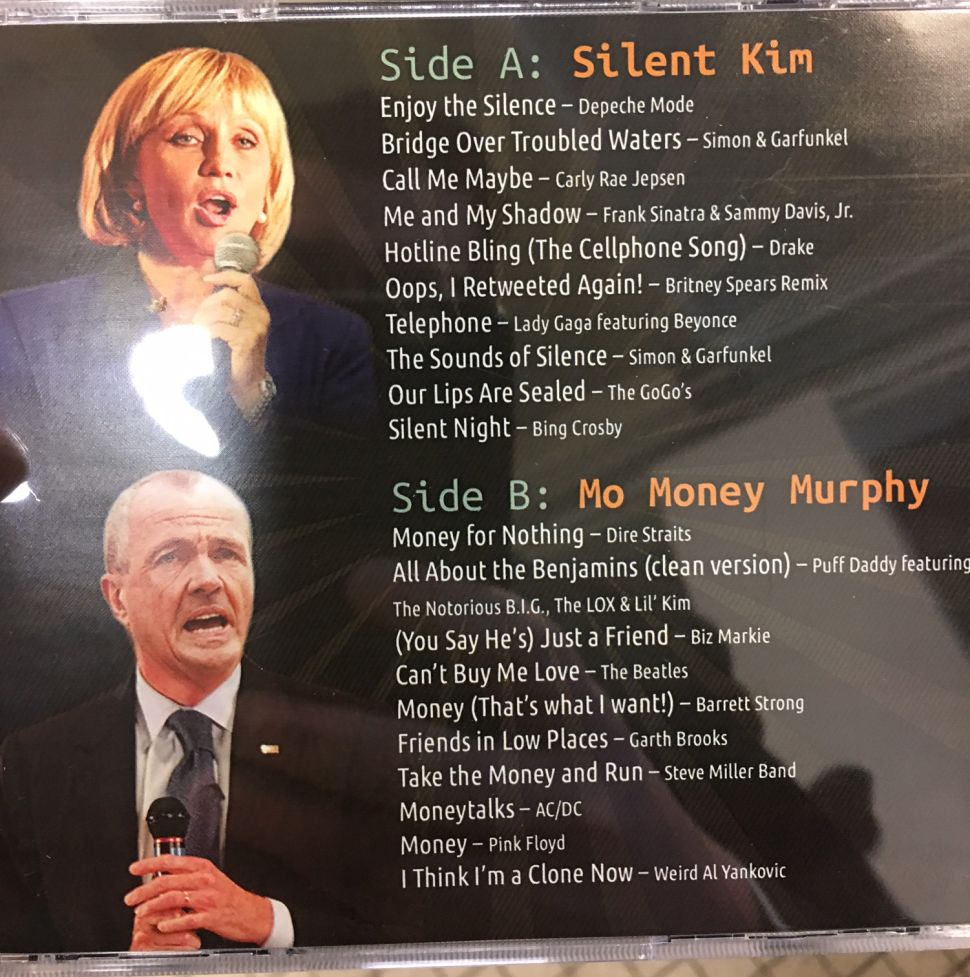