Despite Hillary Clinton’s campaign staff making it abundantly clear that they are inept and undependable throughout her failed election campaign, the mainstream media journalists who advocated for Clinton’s candidacy are still providing them with a platform.

On February 8, MSNBC host Chuck Todd interviewed Clinton campaign Communications Director Jennifer Palmieri. Todd held a private party for Palmieri in late 2015, despite the highly unethical conflict of interest it posed for Todd in providing objective reporting on the 2016 election.

The interview began with Todd comparing Trump protesters to the Tea Party, and the conversation quickly continued down the path of condescension that neo-liberals have perfected. Todd’s first question dealt with corrupt Chicago Mayor Rahm Emanuel, who recently pleaded with Democratic Party supporters to be patient—or, in other words, to stop bothering the Democratic establishment. It is beyond comprehension why Todd and MSNBC think solutions for the Democratic Party will come from the same people who created the current political environment, in which Republicans hold the presidency and majorities in both houses of Congress.

“You are wrong to look at these crowds and think everyone wants $15 an hour,” Palmieri said in regards to the Trump protests. “Don’t assume the answer to big crowds is moving policy to the left. I think the answer to big crowds is engaging as much as you can and being as supportive as you can. What these people want—it’s all about identity on our side now. They want to show he does not support me. I support refugees, I support immigrants in my neighborhood. I want to defend you. Women who are rejecting Nordstrom’s and Neiman Marcus—this is power to them.”

In response to the failure of the Clinton campaign to hijack identity politics to produce a victory in the 2016 presidential election, Palmieri is now trying to appropriate Trump protests into identity politics. In other words, the establishment continues to favor identity politics over meaningful issues.

Palmieri added, “I think it’s our own version of identity politics on the left that’s more empowering and that’s a safer place to be.” Democrats are so unwilling to engage in political policy battles that they continue to stick with this strategy, where symbolic gestures replace meaningful debates and policy reforms that would benefit working, middle class and low income Americans.

Earlier in the interview, Palmieri claimed Trump hijacked the Republican Party with anger and outrage. However, the same thing can be said about the Democratic Party resorting to identity politics to compensate for a lack of political imagination. This charade of political theatrics that the Democratic Party employs gives their base the illusion that they are doing something, while the interests of wealthy and corporate donors are further emboldened. 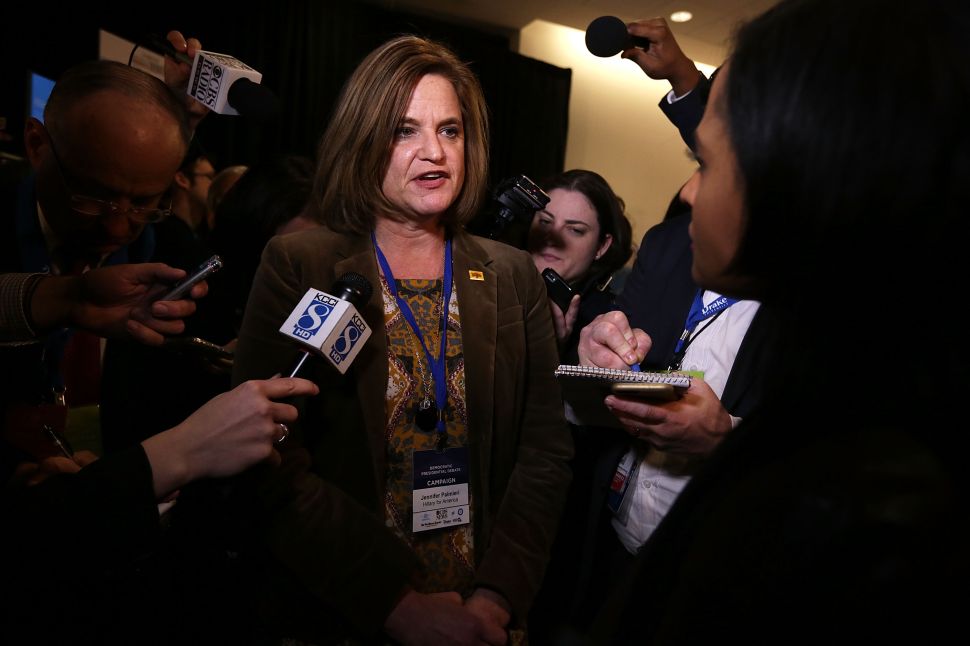