It’s a shame that when the 89th Annual Academy Awards airs on February 26 we, as a society, will know the entire ceremony has been rendered moot, for none of the nominees–not La La Land, not Moonlight, not Manchester by the Sea–are as good as John Wick: Chapter 2. No movie is, for that matter. Movie historians, from this day forward, will have to get used to ending their Greatest Films of All Time lists with #3) Casablanca, #2) Citizen Kane, and in a distant #1) John Wick: Chapter 2, a sequel to a low-budget action movie starring late-career Keanu Reeves and directed by former stunt choreographer Chad Stahelski. This is just how it is, and how it will be.

I wish I could properly describe John Wick: Chapter 2, but all near-flawless art is hard to describe. The Sistine Chapel. Michaelangelo’s ‘David.’ The Mona Lisa. This movie, which is 122 straight minutes of Keanu Reeves wearing tailored suits, killing hundreds, if not thousands of faceless henchman through numerous locations that definitely do not require this many strobe lights in real life. Does that sound like the greatest movie ever made? No, it does not. But it is. John Wick: Chapter 2, much like its title character, overcomes its shortcomings to become something unstoppable.

Let me explain: Here is everything about John Wick: Chapter 2 that SHOULD keep it from being amazing, but, against all odds, does not.

This movie is 70% shots of people walking toward the camera.

This movie is also 20% shots of people walking away from the camera.

Just, like, ditto everything I said above, + John Wick’s butt.

This movie’s plot is “John Wick kills a balls load of people,” and that is pretty much it.

I mean, there’s a plot, certainly more so than the original John Wick. There’s actually a bit of world-building here, a fleshing out of the assassin society John Wick used to work for, some stuff about blood-pacts and excommunications, but…no. The story is essentially exposition-bridges from one action sequence to another, in which John Wick dives and rolls (there’s a lot of rolling) in a form-fitting turtleneck/jacket comb0, handing out shotgun headshots to an uncountable amount of nameless thugs. John Wick, as a character, operates under two basic motivations. In the moment, it is “do not die.” Overall, it is “retire, maybe go to the beach.” I highly doubt John Wick has ever casually gone to the beach, and he is willing to set a record number of on-screen murders to experience that luxury. If there actually is a Guinness World Record for a movie’s body count, John Wick: Chapter 2 just shot it in the face.

And yet, it’s all more oddly beautiful than it is simply brutal, in the giddy way only an action movie could be. The choreography is so tightly complex the experience is closer to a night out at the ballet than it is to a demolition derby. The fights are dances, the car chases are games, and the violence eventually so overwhelming over-the-top it’s impossible to miss that John Wick: Chapter 2–unlike its predecessor, for the most part–is in on its own, bloody joke. The audience I saw this movie with laughed more than it cringed. There’s sumo wrestling. There’s a scene with a pencil that puts The Dark Knight‘s Joker to shame. There’s not much to say, other than John Wick: Chapter 2 is, somehow, violent escapism from an already violent world.

This movie drastically misunderstands how the NJ PATH train works.

Not to give anything away, but a substantial portion of this movie takes place in the World Trade Center PATH station and, eventually, on a PATH train itself. As someone who commutes from Jersey City to Manhattan every day, I know without a doubt that A) the World Trade Center PATH station does not have that many red fluorescent lights, and B) WTC is the last stop! It does not continue to Canal Street! No PATH line even GOES to Canal Street! This is a grievous error. I nearly walked out of the theater.

No, but seriously, this sequence not only features some of the most inventive choreography since, at least, Mad Max: Fury Road, but also contains one of the movie’s biggest laughs.

There is more than one fight scene involving a 52-year-old Keanu Reeves and the rapper Common.

At one point, Laurence Fishburne says the line “We’re going to Applebees after this.”

It is…you know what, do I really need to keep offering examples of why John Wick: Chapter 2 is at once ridiculously stupid and a piece of art so stylistically cool it may actually kill you? How’d you even get this far? Go see John Wick: Chapter 2. Ruby Rose is in it. I didn’t mention that before, but Ruby Rose is in this movie. Doesn’t speak a single word. It’s great. Ian McShane shows up for a few scenes. Oh, man. This whole movie is great. 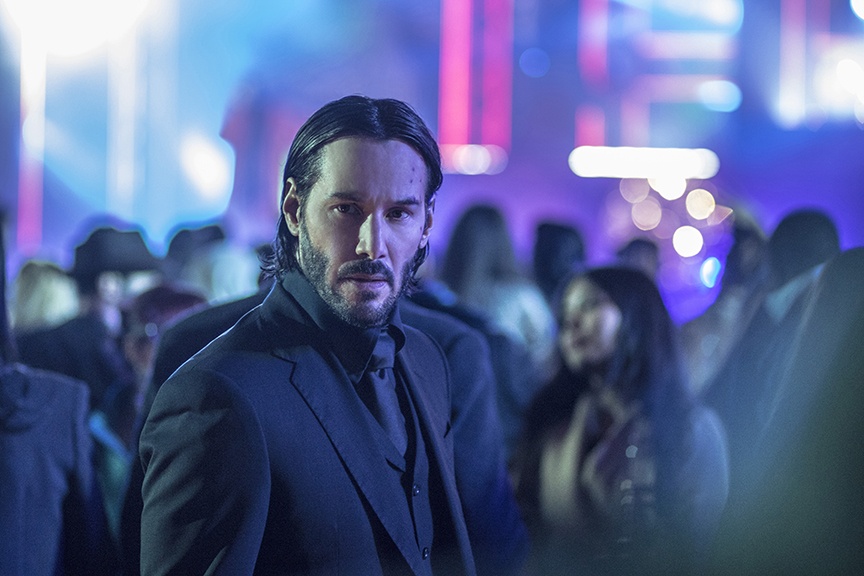