At any other point in history, Judge Neil Gorsuch would likely sail through the nomination process. But in today’s political climate, his confirmation to the U.S. Supreme Court will have little to do with his experience, personality, or even qualifications to sit on the Supreme Court and everything to do with the balance of power on Capitol Hill.

The President…shall nominate, and by and with the Advice and Consent of the Senate, shall appoint Ambassadors, other public Ministers and Consuls, Judges of the supreme Court, and all other Officers of the United States, whose Appointments are not herein otherwise provided for, and which shall be established by Law….

In a perfect world, the Senate Judiciary committee holds confirmation hearings during which the nominee provides testimony and responds to questions from the panel. If the committee votes in favor of the nominee, the full Senate then debates the nomination. To win confirmation, the nominee must be approved by a majority of the Senate.

Like President Obama’s nominee, Judge Merrick Garland, Judge Gorsuch is extremely qualified. He graduated with honors from Harvard Law School. After law school, he attended Oxford University and earned his Doctorate in Philosophy. Judge Gorsuch also clerked for former justices of the U.S. Supreme Court – Justice Byron White and Justice Kennedy. After years of private practice, he went on to work for the U.S. Department of Justice. President George W. Bush nominated Gorsuch to the Tenth Circuit Court of Appeals, where he has served for the last decade.

During his confirmation hearing, the U.S. Senate will not only consider Judge Gorsuch’s professional qualifications, but also his philosophy, political affiliation. or ideology. At his core, Judge Gorsuch is a conservative. He is also a textualist and an originalist, much like the justice he is nominated to replace. In his view, the Constitution is not an evolving document, but should be interpreted as it was originally conceived and drafted. In a law review article memorializing Justice Scalia, Judge Gorsuch wrote:

Judges should instead strive (if humanly and so imperfectly) to apply the law as it is, focusing backward, not forward, and looking to text, structure, and history to decide what a reasonable reader at the time of the events in question would have understood the law to be — not to decide cases based on their own moral convictions or the policy consequences they believe might serve society best. As Justice Scalia put it, “if you’re going to be a good and faithful judge, you have to resign yourself to the fact that you’re not always going to like the conclusions you reach. If you like them all the time, you’re probably doing something wrong.”

In his remarks after being nominated by President Trump, Judge Gorsuch also emphasized that he is not a proponent of judicial activism. “I respect, too, the fact that in our legal order it is for Congress and not the courts to write new laws,” Judge Gorsuch stated. “It is the role of judges to apply, not alter, the work of the people’s representatives. A judge who likes every outcome he reaches is very likely a bad judge stretching for results he prefers rather than those the law demands.”

Also of relevance to Gorsuch’s nomination, Gorsuch joined his colleagues on the Tenth Circuit in ruling that that corporations like Hobby Lobby could refuse to comply with the Affordable Care Act’s contraception mandate based on their sincerely held religious beliefs. Although he wrote a book advocating against legalizing euthanasia, Gorsuch has not decided any cases involving abortion, which tends to be a “hot button” issue during Supreme Court confirmations.

Depending on who you ask, Judge Gorsuch is either a “great” choice or a “disastrous” one. In reality, he is an accomplished jurist, with a reputation for being both intellectual and fair-minded. Whether ultimately serves on the Supreme Court will largely be determined by just how broken the Senate approval system has become. Given the Republicans outright refusal to hold confirmation hearings for Judge Garland, the Democrats are gearing up for a fight. It may not matter, however, given that President Trump and several Senate Republicans have vowed to push the nomination through using the so-called nuclear option, which would alter the Senate rules to require only 51 votes. 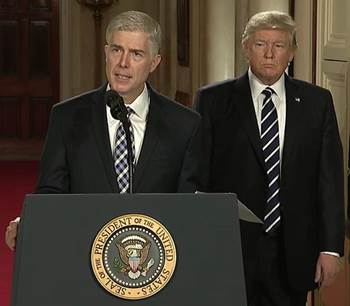