Michael Guadagno is a judge on the Appellate Division of the Superior Court in New Jersey. But he’s also the loving husband of Lieutenant Governor Kim Guadagno. And how do we know this? Because Judge Guadagno told us so.

Judge Guadagno is retiring from the bench after a long career that includes Family Court in Monmouth and Ocean Counties and also as the presiding judge of the family court in Monmouth.

He is required to notify the Secretary of State of his retirement and that happens to me the other role fulfilled by Kim Guadagno herself. In an adorably cheeky note, which PolitickerNJ spotted on SaveJersey, dated January 26, 2017 and filed with her office the following day, Judge Guadagno notified “Madam Secretary of State” that he has reached the mandatory retirement age. He signed it “Your loving husband” and in between slipped in some commentary.

He acknowledges that he is required to submit the note officially to collect his pension and notes that Kim gets no extra pay despite having “served as acting Governor for more than five hundred days,” a pretty clear reference to Chris Christie’s penchant for out-of-state travel.

The retirement enables Judge Guadagno to campaign for his wife, which he was unable to do in 2009 and 2013. It also removes any potential conflicts between the branches of government. The former first lady of Pennsylvania, Midge Rendell, was appointed by then-President Clinton first to the US District Court in the Eastern District of Pennsylvania and then to the U.S. Court of Appeals. Her husband, Ed Rendell, served as governor from 2003-2011. (The couple actually separated that year.)

Judge Guadagno also suggests his wife “consider a career change to a more lucrative position.” Considering that the salary for the LG is $141,000 and the governor earns $175,000, that promotion would presumably fit the bill. 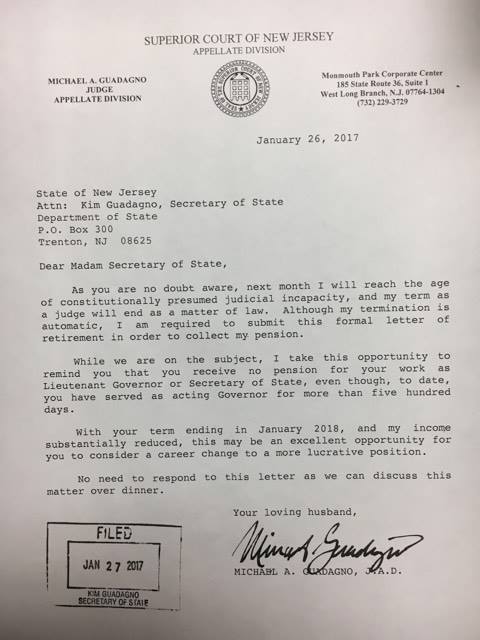