“I can’t see anything,” one guest said as they used their iPhone flashlight to find their seat inside Kanye West’s Yeezy Season 5 showing. The collection, West’s fifth consecutive under the Yeezy moniker, made its debut earlier this afternoon at Pier 59 Studios. Last season’s sweltering saga was held on Roosevelt Island and included several hiccups that were well documented by all showgoers. Luckily for editors, this season was far more efficient. A select group of 300 guests seated in just four rows were met with an entirely dark square room; in the middle stood a black column that ultimately revealed itself to be a video screen. Just 20 minutes behind its 3 PM start time, each look projected onto the screen, the models rotating on a swivel to give a 360 degree view. It seemed to be West’s response to those who criticized his showmanship in past seasons and how he did not allow the garments to be seen up close.

The details revealed the rapper-cum-designer’s homage to wife Kim Kardashian’s hometown of Calabasas, California, which many had predicted after spotting the prototype garments on the Kardashian-Jenner clan. “CALABASAS LOST HILLS,” was emblazoned across several shearling jackets and windbreakers, in addition to a dragon crest. Other standouts included several light wash denim looks, a fur coat and hijab on 19-year-old Somali-America model Halima Aden, and the reveal of the Yeezy x adidas runners on each of the male models. The women wore the brand’s requisite thigh-high boots, but luckily none broke this time around. Those looking closely also spotted a hint at an upcoming collaboration between West and Jacob Arabo, better known as “Jacob the Jeweler,” who was seen in the crowd.

Other notable sightings included Hailey Baldwin, who clarified to me that while she loved the show she was not wearing Yeezy today, and her pal Teyana Taylor, who has been a frequent fixture on the New York Fashion Week scene this season. In the front row sat (who else but?) Kim Kardashian in an oxblood ensemble from the Yeezy collection. The bombshell darted backstage to congratulate her husband immediately after the models took one final lap around the room. To her left sat architect Peter Marino, and to her right, Anna Wintour, who also made a quick exit after embracing Mr. West. “Let’s get out that way,” she said as she was ushered through with close pal and funnyman Seth Meyers as well as a security escort. “My car’s parked in the garage downstairs.” And with that, the fashion masses spilled out into the streets. The clothes may not have been revolutionary, but it appears West has learned how to run a much tighter ship. 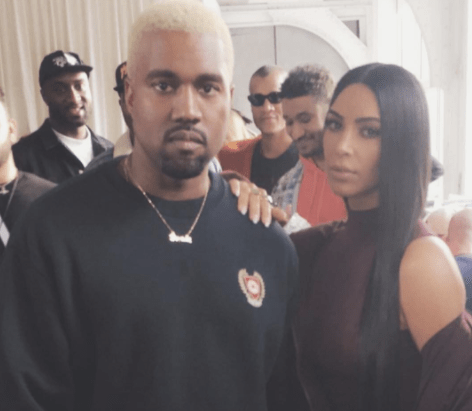