One of oldest surviving films made by Thomas Edison, dating from 1894, features two cats boxing in a miniature ring. Little could Edison have imagined back then that these 22 seconds of jittery, black-and-white footage would give birth to the entire genre of cat videos. Today, more than century later, the sheer number of cats we see every day on screen—usually cute, often silly, always shareable—is enough to truly give us paws: according to Slate magazine, there are over two million cat videos on YouTube alone, which have been viewed more than 25 billion times; one study (albeit funded by Friskies cat food) estimates that 15% of all internet traffic is cat-related.

And yet, despite the sheer volume of views, shares, and DIY attempts to capture cats on screen, something has been lost in the process: the stature of the noble cat—once regarded as majestic, or even revered as divine—has been sadly diminished, in much the same way that online videos threaten to diminish the scale and beauty of film (or perhaps return it to its roots in Kinetoscopes and other small formats).

The story follows the saga of seven stray street cats in the city of Istanbul: Siri (the Hustler), Psikopat (the Psycho), Bengü (the Lover), and so on. Following these feline urbanites, who occupy a liminal space—not “in the wild” but certainly not tamed—we re-discover the essential qualities of grace, tenacity, perception, friendship, and independence that define the soul of the cat—and, it turns out, nurture the soul of a city and its residents as well.

Ceyda Torun’s latest film Kedi (2016, originally entitled Nine Lives: Cats of Istanbul), holds the potential to reverse this trend, serving as a beautiful reminder of what we have lost in all this online noise. The story follows the saga of seven stray street cats in the city of Istanbul: Siri (the Hustler), Psikopat (the Psycho), Bengü (the Lover), and so on. Following these feline urbanites, who occupy a liminal space—not “in the wild” but certainly not tamed—we re-discover the essential qualities of grace, tenacity, perception, friendship, and independence that define the soul of the cat—and, it turns out, nurture the soul of a city and its residents as well.

From the first shots it is clear we are watching a different sort of film: for one thing, the camera is low, not a “cat’s eye” but a “cat’s angle,” exploring the city as experienced from the ground level; I’ve never seen a film with more legs and feet—but such is the world of cats. As with the best (human-subject) cinéma vérité documentaries, Torun has an impressive ability to get her subjects to ignore the camera and just do whatever it is they do, taking us along for the ride. (I recall once hearing that when Walt Disney was designing his theme parks, he would crouch down low to view key locations—the entrance to the Haunted House, the approach to Cinderella’s Castle—to make sure his architects were designing for the 36″-tall visitor; shadowing the cats of Kedi, this urban-planner-cum-film-reviewer noted immediately how dramatically different the city is from a cat’s—or a child’s—perspective.)

Soon, however, the low-angle shots racing along curbs and under café tables gives way to the upper stories that are the true domain of wild street cats. Like their arboreal ancestors, the cats of Istanbul roam freely across all three-dimensions of the vertical city, climbing trees, skirting roof-lines, and dozing on sunny ledges.

At times, after following one cat or another for a spell (in, out, under, through, up, and over—these cats really do get around!), the camera pulls back to reveal the surrounding city in all its splendor. Like other great cities, Istanbul seems to be have been made for film: following our native feline guides, we discover a timeless landscape of domes, spires, red-tiled roofs, weeping arbors, and endless sea and sky. Better still, mindful of our subject, each new shot presents a puzzle, as the viewer’s eyes dart around the screen, searching for cats to follow, a dynamic game of “Where’s Waldo?”

In this manner, we witness the life of the urban cat: the obligatory fish market scene, with playful Chaplin-esque scamps capable of charming even the grumpiest vendors; a tough street-fight over disputed turf; the emotional roller-coaster of birth, nine lives, and death. At one point, our feline narrative even intersects with the all-too-human politics of gentrification and urban renewal, as the old neighborhood—an eclectic, cat-friendly warren of informal market stalls, vacant lots, low-rent walk-ups, fire-escapes, and loading docks—is slated for clearance and development. Communities, both human and feline, are threatened by modernization and capital. (On more than one occasion we also glimpse anti-Erdoğan graffiti sprawled behind some of our prouder, shadier heroes, as if one might be a four-legged Banksy on the prowl…)

Throughout these adventures, of course, we also encounter people: Istanbul is the largest city in Europe, a global trading port and melting pot where cats around the world mix with more than 14 million residents. In their wanderings, the cats of Istanbul visit shut-ins, fishermen, children, and strangers, trading companionship for a pat on the head or a bowl of fresh milk. The process is a symbiotic one, demonstrating the relationship-among-equals so aptly explained in Kipling’s classic Just-So Story, The Cat That Walked by Himself: unlike dogs, who will willingly surrender their freedom for a warm fire and a tasty bone, cats meet humans on their own terms, and will always come and go as they please.

Everyone in the neighborhood has a favorite cat—they give them names, personalities, entire narratives. Strangely—beautifully—in anthropomorphizing the cats, residents themselves are humanized in the exchange. One senses that Istanbul is a more caring, communal, functional city thanks to the influence of these strays. There is a lesson here: while cats are independent in spirit, they are also fundamentally social at heart. As such, they the perfect urban dwellers: self-sufficient, but also trusting; adventurous and bold, yet still careful and cautious; curiosity mixed with consideration.

And it is precisely these combinations that make cities work, whether today or in the past, whether in Istanbul, Constantinople, or New York: far too often, planners and urbanists emphasize the virtues of only one side or the other of these essential traits, forgetting that only when they are balanced can people succeed in living so closely. Perhaps due to their instinctive agility, the cats of Kedi are able to appreciate and navigate this equilibrium intuitively; we would be wise to learn from them and follow in their footsteps.

(Afterward: two decades ago, the theme of a wandering city-cat connecting residents in an old-world neighborhood in the shadows of urban renewal was explored in Cédric Klapisch’s wonderfully-poignant Parisian romp, Chacun Cherche Son Chat [When the Cat’s Away], a film this reviewer would love to see revived.)

KEDI is currently out in limited release. 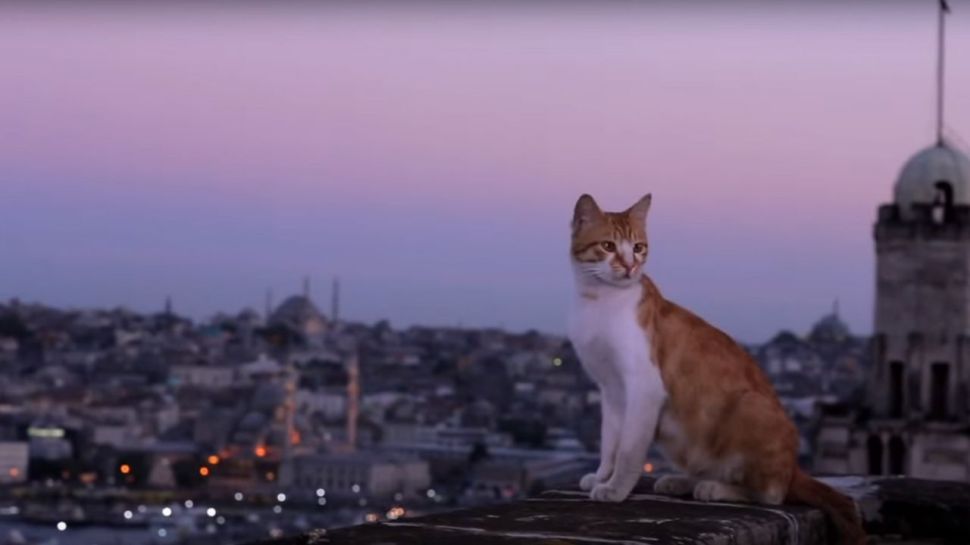