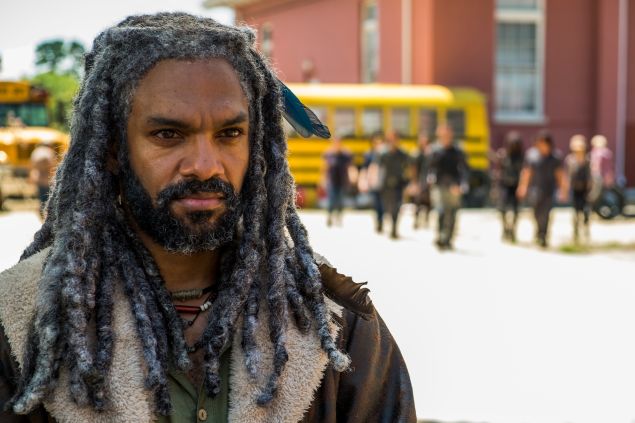 During last night’s midseason premiere, I did something I haven’t done in a long time while watching The Walking Dead–I laughed. And not in an “Oh jeez, he’s still just bashing that guy’s skull in, huh?” type of way. In a genuine, lighthearted way, when Paul “Jesus” Rovia (Tom Payne) introduced our bewildered heroes to King Ezekiel (Khary Payton) with a dry, “oh yeah, I forgot to mention the tiger.”

That is pretty much par for The Walking Dead‘s course when it chooses to feature Ezekiel, a Shakespearian presence who sticks out in TV’s most dour drama like an infected Walker thumb. Payton–a veteran voice actor behind a good chunk of DC Comics’ animated universe–plays the character with such refreshing boisterousness he makes the zombie apocalypse look, if not fun, totally do-able. Instead of, say, bloodthirsty cannibals, Ezekiel governs a Kingdom populated by devoted pacifists who have eschewed the typical blood-and-guts aesthetic for a more Medieval Times vibe, knights and armor and all. Oh, yeah, I forgot to mention…the dude also has a pet tiger named Shiva, which is exactly as dope as it sounds.

We caught up with Payton–a diehard Atlanta Falcons fan still recovering from Super Bow LI–to discuss Ezekiel, his Kingdom, his tiger and what The Walking Dead‘s most optimistic character really thinks about Negan.

The Walking Dead gets criticized a lot for being too dark, but I feel like Ezekiel is often the lightest part of the show.

I don’t think about Ezekiel as the comedy relief, necessarily, but I do understand that he is a breath of fresh air. He’s an optimistic voice, in a place where people kind of got their head down, just trying to survive, and he is very actively trying to do more than survive. That is something that is a huge part of who he is as a man. And a huge part of his feeling as far as what survival means, and what a life worth living means in an apocalypse. It’s still something that needs to be joyful and exuberant, despite your surroundings. I think that his character is always trying to find the light. If it ends up there’s a little joviality and a little joking along the way, that’s always a good thing. 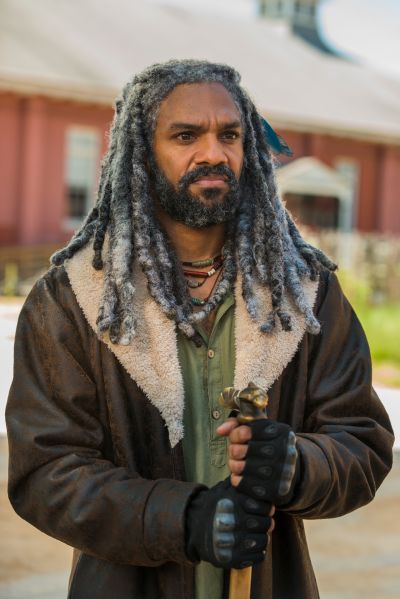 You’ve said before that you see two different versions of this character, “Zeke” and “Ezekiel.”  This season are we going to see those two ideas merge closer, or grow further apart?

You may seem them blend, a little bit. You’ll see him relax, but he’s mostly in Ezekiel mode, even when he’s relaxing. He may feel relaxed, but he’s gotten so used to playing the role of a king that it’s become second nature. Even in his quieter moments, it never really leaves him, unless he decides it needs to be turned off.

Do you see Ezekiel growing too used to the idea of being a king? There’s has to be something up with someone who insists people call him king.

You know, I don’t think he necessarily insists on being called king. I think it’s something that evolved and happened. It’s one of these things where he became a leader, and people started calling him king, and he started acting the part. Because that’s what they needed. In order to do what he does, and lead the way that he leads, the people around him call him king, so it’s something that stuck. I don’t think it’s something he does out of ego. It’s more he does it out of a sense of necessity. Again, to an outsider you’re just not sure how to take this guy. I think that works to his advantage, and I think he realizes that.

You know, it never felt difficult. The chemistry just seemed to flow. Although I play Ezekiel in this robust, kind of over-the-top way, I feel like there’s always a sense of groundedness about him. Although it’s very showy, he’s doing it for a very specific reason, and not just for show. He’s doing it to a very specific effect. Although it’s big and it’s kind of crazy, it’s not goofy. There are very important reasons behind it. So when he’s talking to Rick, even though, yeah, Rick’s got a much different way of expressing himself, I think at the end of the day they’re both very serious leaders. 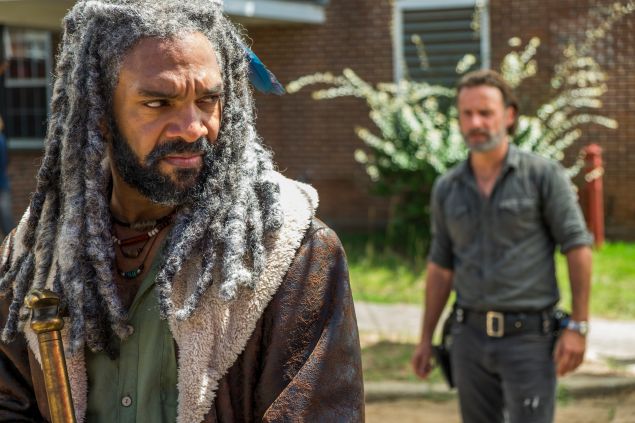 Despite the fact that Ezekiel used to be just a zookeeper–and I say that facetiously because I don’t mean just a zookeeper–I think despite one thinking of that as mundane work, it really isn’t. Even before the apocalypse, Ezekiel was the kind of zookeeper that when something went wrong he jumped into a cage with a tiger. He’s not a guy who shrinks from the moment. Despite the fact that he wasn’t a civil leader before the apocalypse, he’s never been a guy who shrank from the moment. I would venture to say that all of the leaders we’ve met along the journey of this apocalypse, that he’s got the best handle on what he’s doing.

With that said, Ezekiel’s theatrical style of leadership is, in a way, similar to Negan’s over-the-top style. We don’t even know if the two have met yet, but what do you think Ezekiel’s opinion of Negan is?

I don’t think they’ve met. I really don’t think they’ve met. Which is part of the reason why Ezekiel doesn’t feel obliged to go to war with this guy. Up until this point, as far as we know, the Kingdom is the only community that has dealt with the Saviors that hasn’t lost a member because of the Saviors. Ezekiel’s been able to work a deal with these guys and keep them at arm’s length. While these other people have had trouble figuring that out, Ezekiel’s been able to keep his people safe. At this point in time, he’s thinking like, “Well what’s wrong with you guys? You want to spill my people’s blood? I’ve been doing my job as a leader, you guys need to figure out how to play a different tact.” Especially against a guy who Ezekiel has been able to handle, in a way. He’s been able to handle Negan.

One of the biggest selling points of The Walking Dead is that “nobody is safe” idea, and I can’t really think of a more devastating death than Shiva. What do you think it would do to Ezekiel, should anything happen to Shiva?

Man, I think it’d be devastating. Because I think that Shiva is kind of his reason for living, beyond the Kingdom that he’s been able to build. In that scene with Carol, in ‘The Well’ episode, he says “I wouldn’t be here without her.” She was the last thing in this world that he loved before the apocalypse. He went looking for that last thing to hold on to, and she protected him while he was trying to figure out who he was in this world.

She very well could be the last of her kind, you know? I think at some point it stopped being a thing where she was protecting him, and he decided that now the most important thing is for him to protect her. Obviously, she’s a big cat and can take care of herself [laughs], but I think, in a lot of ways, she is his baby now. 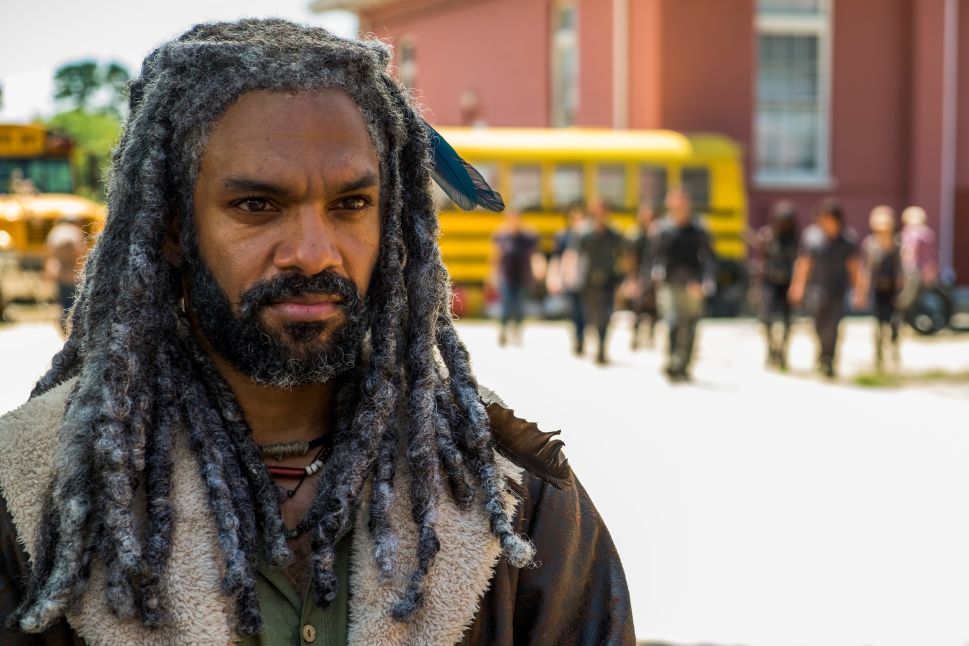