Pop Psych: Where we ask a real psychotherapist to delve into the mindsets of our favorite pop culture characters. This week: Noah Hawley’s Marvel mind-bender delves into sibling insanity.

It’s easy when working with any client to place the focus directly on them, to develop a sort of tunnel vision that bends all light until it’s all filtered through them. This is doubly true when working with families, and is the sort of therapeutic mistake that is warned against by every book, teacher, and supervisor worth the trouble of consultation. As Humans, we want simple answers; we want small problems with real solutions. As therapists, we have to remember that people live in communities, in systems, and that systems are deeply interconnected. Change one small thing, get large and unexpected results. Something as innocuous as cheaping out on your research could lead to Jeff Goldblum having to outrun a T-Rex.

True to form, FX’s new show, Legion, puts the focus squarely on its unreliable protagonist, David Haller (Dan Stevens). We viewers don’t know a ton about the guy, which isn’t helped by his brain’s able participation in creating alternative facts, but when we meet him he is in a psych ward, ostensibly as a result of a suicide attempt. As the first episode goes on, we learn that – assuming what we see is mostly true – he’s a man possessed of and by incredible powers to alter the world around him. Further, he appears to be quite magnetic, though not in the mutant sense. People flock to him, whether it be to cure, to befriend, to date, or to use. Say what you will about vivid mental illness, it at least grabs the eye.

Scooting around the edges of the narrative, though, we have David’s sister, Amy Haller (Katie Aselton). For as little as we reliably know about David, we know even less about Amy. But because families are systems, and they’re from the same family, we can start to make some guesses. We know from the opening montage that David was a firecracker from the start, causing trouble seemingly before his powers started to manifest. Hanging with a tough crowd in the neighborhood, setting fires at school, and getting mixed up with the cops as an adolescent, this kid was obviously a handful. Like I said above, David is magnetic, and without a doubt, he would have some kind of magnetic effect on his parents, either to pull them in or push them away.

Whether their parents move closer to David to try and control him with greater discipline, or further away to try and distance themselves from the heavy responsibilities of raising him, it leaves Amy alone.

Of course, David’s parents are Amy’s parents, too, and this is where we can start to wonder about her life. Whether their parents move closer to David to try and control him with greater discipline, or further away to try and distance themselves from the heavy responsibilities of raising him, it leaves Amy alone, and with a lot of work to do. If you’re an adult, then you know that adult responsibilities are very hard under the best of circumstances. If you have children, then you know that raising children well adds severely to that burden. And if one of your children, who you love dearly, is violent and chaotic, well, you know how little time you may have for anything else.

[Amy’s] mind is more anchored in the fantasy of normality than in the reality of insanity.

In Amy’s case, the message seems to have hewed more closely to the “quiet and helpful” option. If you look at how she shows up so far in Legion, it’s very meek. She dresses conservatively and seems to espouse traditional conservative values: she brings David a cupcake to the mental hospital on his birthday; she, not their parents, makes an effort to maintain family ties in the face of great suffering. But perhaps more tellingly, she doesn’t seem to understand the gravity of the situation. We know that David has been in the hospital for over 5 years, but she still tries to pass him the cupcake, not because she wants to break the rules but because she has forgotten them. Her mind is more anchored in the fantasy of normality than in the reality of insanity.

We see this continue and deepen further into the episode after David escapes from the hospital and holes up at Amy’s house. She sets him up on a couch bed in the basement and goes in for a hug. Though she and her husband have been visibly shaken throughout this entire sequence, she leans into David and says, “it’s good, it’s gonna be good.” The glib understanding of this might be that she’s trying to convince herself, but that’s not quite it. She tells David it’s going to be good and, though he obviously knows better than to believe that, appears to do so all the same. He calms down. The music changes over to something that inspires wonder, and he flashes back to being a baby experiencing the simple joy of regular life.

What’s going on is that the two of them are re-experiencing their family system and, thus, their childhood. A childhood in which it seems likely that Amy ended playing the role of the caretaker (something we see Lenny (Aubrey Plaza) do as well, briefly, right before David snaps at the hospital). Of course, this isn’t really fair to Amy; children aren’t supposed to be caretakers. Sisters shouldn’t have to raise brothers. But sometimes the normal rules go out the window and family systems make do.

The result, though, is not just that Amy loses much of her childhood to playing grown up, but that her grown-up life ends up being formed by her childish vision of it. This may be why she seems so out of step with the world, why she seems so old fashioned. She had to learn to be an adult when she was still a child, which meant growing into a child’s fantasy of adulthood. Which is not necessarily a worse (or better) option, but, like all options, comes with the cost of every other option not pursued. Who knows who she would have been if she had time to choose carefully? 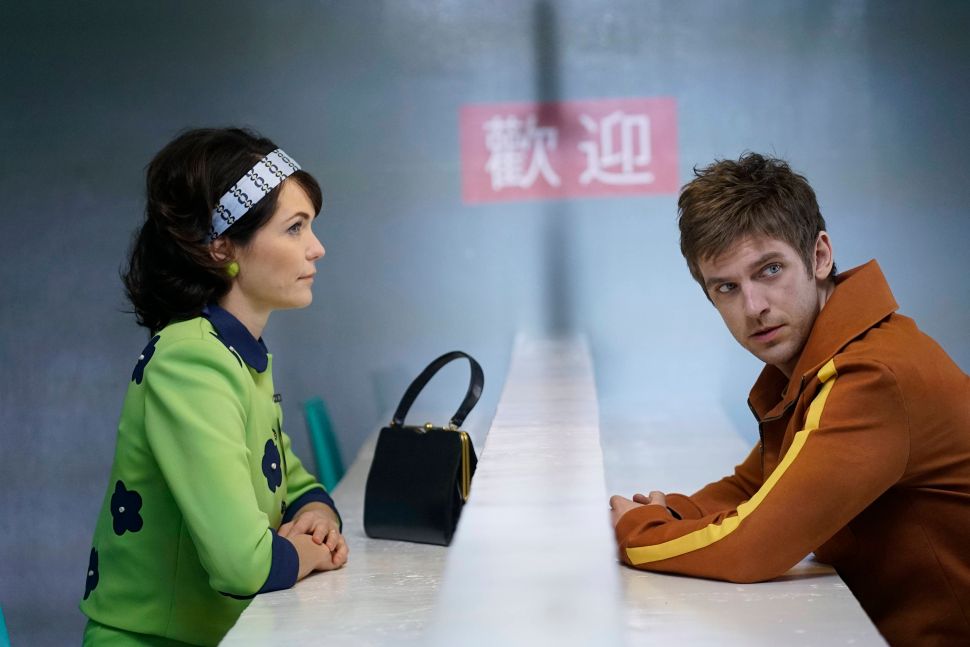