There’s an episode of Community in which some of the characters face the impossible, even maddening, task of figuring out whether Nicolas Cage is good or bad. “I mean, he seemed scared to smell that flower, but happy to get shot,” observes student Troy, trying to make sense of what we can assume is a typical performance by the actor. His description also serves as a perfect encapsulation of the way Dan Stevens plays the main character, David, on Legion. His every gesture is unpredictable, every read on every line is over-the-top weird for no apparent reason beyond the fact that his character faces inner demons. Even when a character tells him something that shouldn’t surprise him in context, he responds by seeming totally freaked out. I don’t think I’ve ever seen an ensemble with so many excellent performers backing up such a ridiculous one: Aubrey Plaza is a joy to watch; Jean Smart has the power of a Bening or a Streep; Jeremie Harris, as Ptonomy Wallace, did a great job delivering a monologue about memory in this episode.

A lot of pop culture nowadays seems, like Cage’s acting, not good or bad so much as just confusing, designed to get your coworkers riled up about whether “they meant to make it like that.” But here’s the thing: I don’t think this is that kind of show. For a superhero-adjacent property that features ‘70s-style costumes and a devilish blob monster, it’s not campy at all—rather, it has a subtly detailed and referential pop-art aesthetic. Which is what makes the moments where it falters, including every time Stevens talks or looks at something, all the more embarrassing and confounding.

The episode opens with a lens-flare-heavy series of shots in which our heroes continue on the run from the government agents who would destroy them, with a Starbucks-y cover of the Talking Heads’ “Road to Nowhere” playing. “And so we ran on…” Stevens intones in a completely serious voice-over. “And all the while the wolves were at our heels.” I swear I wrote something like this in my Livejournal senior year. It sounds like a Kenny Powers voice-over.

The gang ends up at a facility where Smart’s Melanie begins training David to focus through the voices he hears and read one mind at a time. She assures him that he’s not schizophrenic, and that even his visions of the Devil with Yellow Eyes are not due to mental illness. She and Ptonomy also help David reach back into the mystery of his memories, which apparently include David’s father reading him a story about the angriest boy in the world, a boy who murders his mother.

Another memory involves David and Lenny scoring drugs together and planning on ripping off David’s shrink. “The stove is the utility player of the modern home,” says Lenny, trying to sell a stove to a guy in a junkyard (while David stares at a dog in exactly the same way Cage stares at the iguanas in Bad Lieutenant: Port of Call New Orleans). How do such good lines coexist with such bad ones? The characters involved in any given scene, and how much fun writer and showrunner Noah Hawley is able to have with them, dictate way too much how entertaining that scene will be. A show about Lenny going around committing crimes would have been superior to this show, even though this show is about the world’s most powerful mutant. (This was probably also the problem with Fargo season 2—Bokeem Woodbine’s wry assassin and Nick Offerman’s drunken lawyer were just so much better-written than the nondescript police officer main characters).

Syd reveals that while she was inhabiting David’s body, she caused the door disappearance that killed Lenny. She still won’t touch David, even while wearing dope X-Men-y gloves. “We’re having a romance of the mind,” he says, causing this recapper to groan out loud and roll his eyes, imagining college freshmen using that line while having emotional affairs at the library.

David gets his mind scanned and finds himself trapped inside the scanner with the Devil with Yellow Eyes. He teleports the scanner into a courtyard outside. He’s also able to see that his sister Amy has been taken by the sinister, curly-haired fellow with vision problems—apparently called The Eye. Syd makes the point that they won’t kill her because they’re using her as bait, and that David should stick around and learn how to use his powers to defeat these guys first. The episode ends with The Eye putting a tank of little eels in front of the captive Amy and saying, “Shall we begin?” This frightening moment of dramatic irony almost redeems the whole episode. Once Dan Stevens starts adhering to bizarre diets and purchasing spooky New Orleans tombs, I’ll be sold. 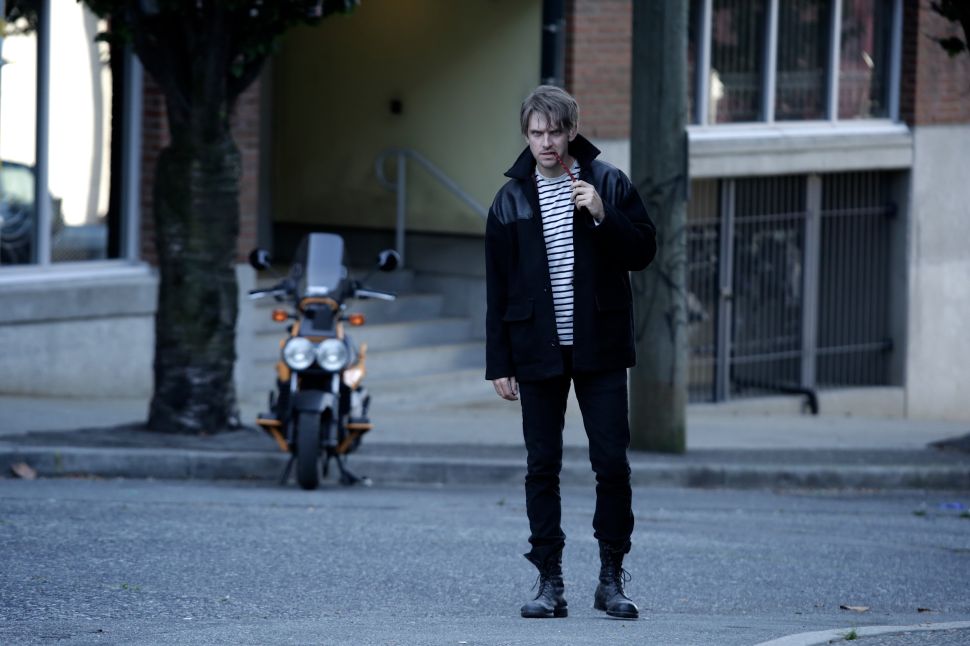