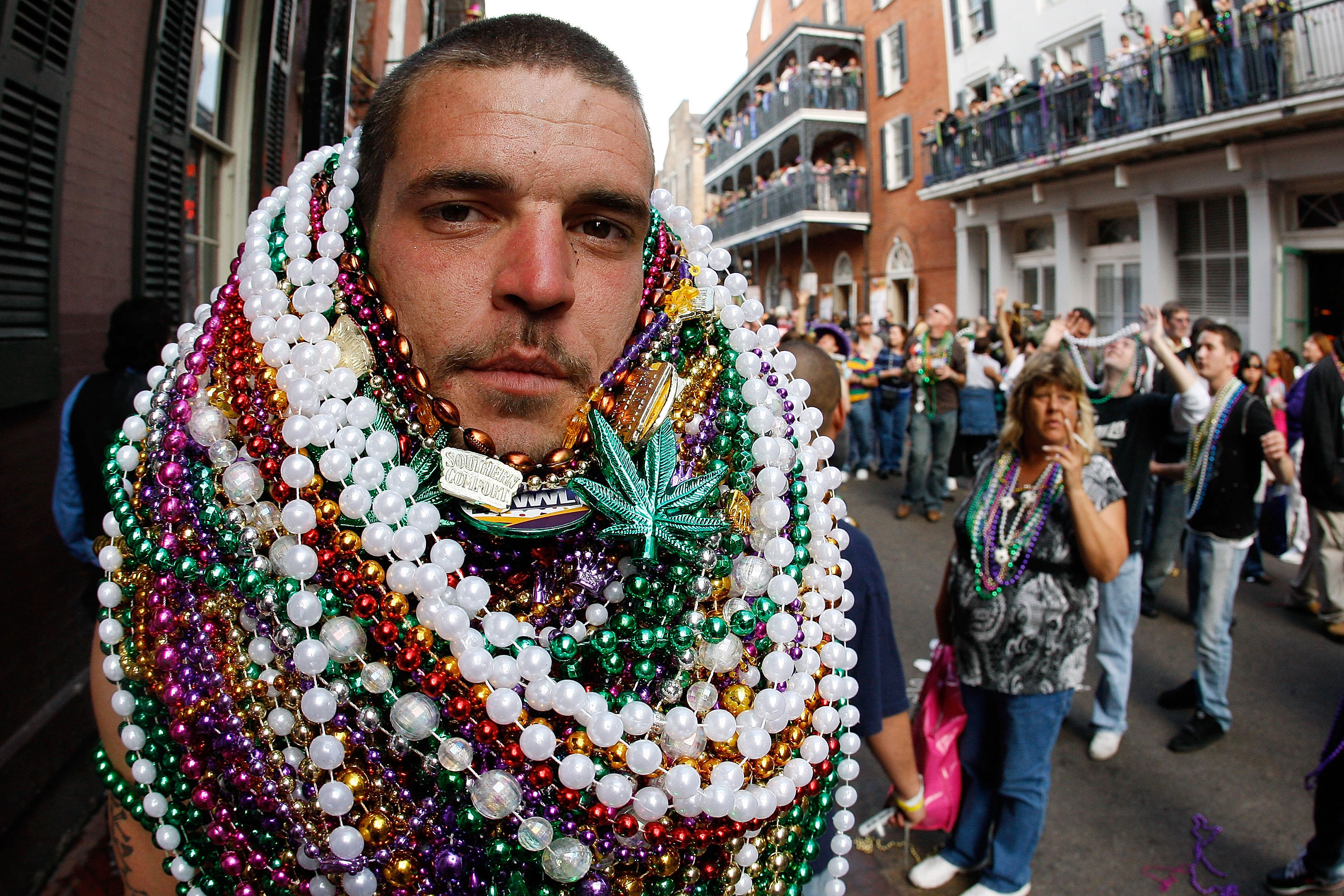 A reveler walks along Bourbon Street with a stack of beads around his neck during Mardi Gras day on February 24, 2009 in New Orleans, Louisiana. Chris Graythen/Getty Images

Even if you’ve never been to the Carnival celebrations, you probably know the typical scene that plays out on New Orleans’ Bourbon Street every year: Revelers line up along the parade route to collect beads tossed from floats. Many try to collect as many as possible, and some drunken revelers will even expose themselves in exchange for the plastic trinkets.

But the celebratory atmosphere couldn’t be more different from the grim factories in the Fujian province of China, where teenage girls work around the clock making and stringing together the green, purple and gold beads.

I’ve spent several years researching the circulation of these plastic beads, and their life doesn’t begin and end that one week in New Orleans. Beneath the sheen of the beads is a story that’s far more complex – one that takes place in the Middle East, China and the United States, and is symptomatic of a consumer culture built on waste, exploitation and toxic chemicals.

‘The same thing over and over’

The Mardi Gras bead originates in Middle Eastern oil fields. There, under the protection of military forces, companies mine the oil and petroleum, before transforming them into polystyrene and polyethelene – the main ingredients in all plastics.

The plastic is then shipped to China to be fashioned into necklaces – to factories where American companies are able to take advantage of inexpensive labor, lax workplace regulations and a lack of environmental oversight.

I traveled to several Mardi Gras bead factories in China to witness the working conditions firsthand. There, I met numerous teenagers, many of whom agreed to participate in the making of my documentary, “Mardi Gras: Made in China.”

Among them was 15-year-old Qui Bia. When I interviewed her, she sat next to a three-foot-high pile of beads, staring at a coworker who sat across from her.

I asked her what she was thinking about.

“Nothing – just how I can work faster than her to make more money,” she replied, pointing to the young woman across from her. “What is there to think about? I just do the same thing over and over again.”

I then asked her how many necklaces she was expected to make each day.

“The quota is 200, but I can only make close to 100. If I make a mistake, then the boss will fine me. It’s important to concentrate because I don’t want to get fined.”

At that point the manager assured me, “They work hard. Our rules are in place so they can make more money. Otherwise, they won’t work as fast.”

It seemed as if the bead workers were treated as mules, with the forces of the market their masters.

In America, the necklaces appear innocent enough, and Mardi Gras revelers seem to love them; in fact, 25 million pounds get distributed each year. Yet they pose a danger to people and the environment.

In the 1970s, an environmental scientist named Dr. Howard Mielke was directly involved in the legal efforts to phase out lead in gasoline. Today, at Tulane University’s Department of Pharmacology, he researches the links between lead, the environment and skin absorption in New Orleans.

Howard mapped the levels of lead in various parts of the city, and discovered that the majority of lead in the soil is located directly alongside the Mardi Gras parade routes, where krewes (the revelers who ride on the floats) toss plastic beads into the crowds.

Howard’s concern is the collective impact of the beads thrown each carnival season, which translates to almost 4,000 pounds of lead hitting the streets.

“If children pick up the beads, they will become exposed to a fine dusting of lead,” Howard told me. “Beads obviously attract people, and they’re designed to be touched, coveted.”

And then there are the beads that don’t get taken home. By the time Mardi Gras is over, thousands of shiny necklaces litter the streets, and partiers have collectively produced roughly 150 tons of waste – a concoction of puke, toxins and trash.

Independent research on beads collected from New Orleans parades has found toxic levels of lead, bromine, arsenic, phthalate plasticizers, halogens, cadmium, chromium, mercury and chlorine on and inside the beads. It’s estimated that up to 920,000 pounds of mixed chlorinated and brominated flame retardants were in the beads.

How did we get to the point where 25 million pounds of toxic beads get dumped on a city’s streets every year? Sure, Mardi Gras is a celebration ingrained in New Orleans’ culture. But plastic beads weren’t always a part of Mardi Gras; they were introduced only in the late 1970s.

From a sociological perspective, leisure, consumption and desire all interact to create a complex ecology of social behavior. During the 1960s and 1970s in the United States, self-expression became the rage, with more and more people using their bodies to experience or communicate pleasure. Revelers in New Orleans started flashing each other in return for Mardi Gras beads at the same time the free love movement became popular in the U.S. 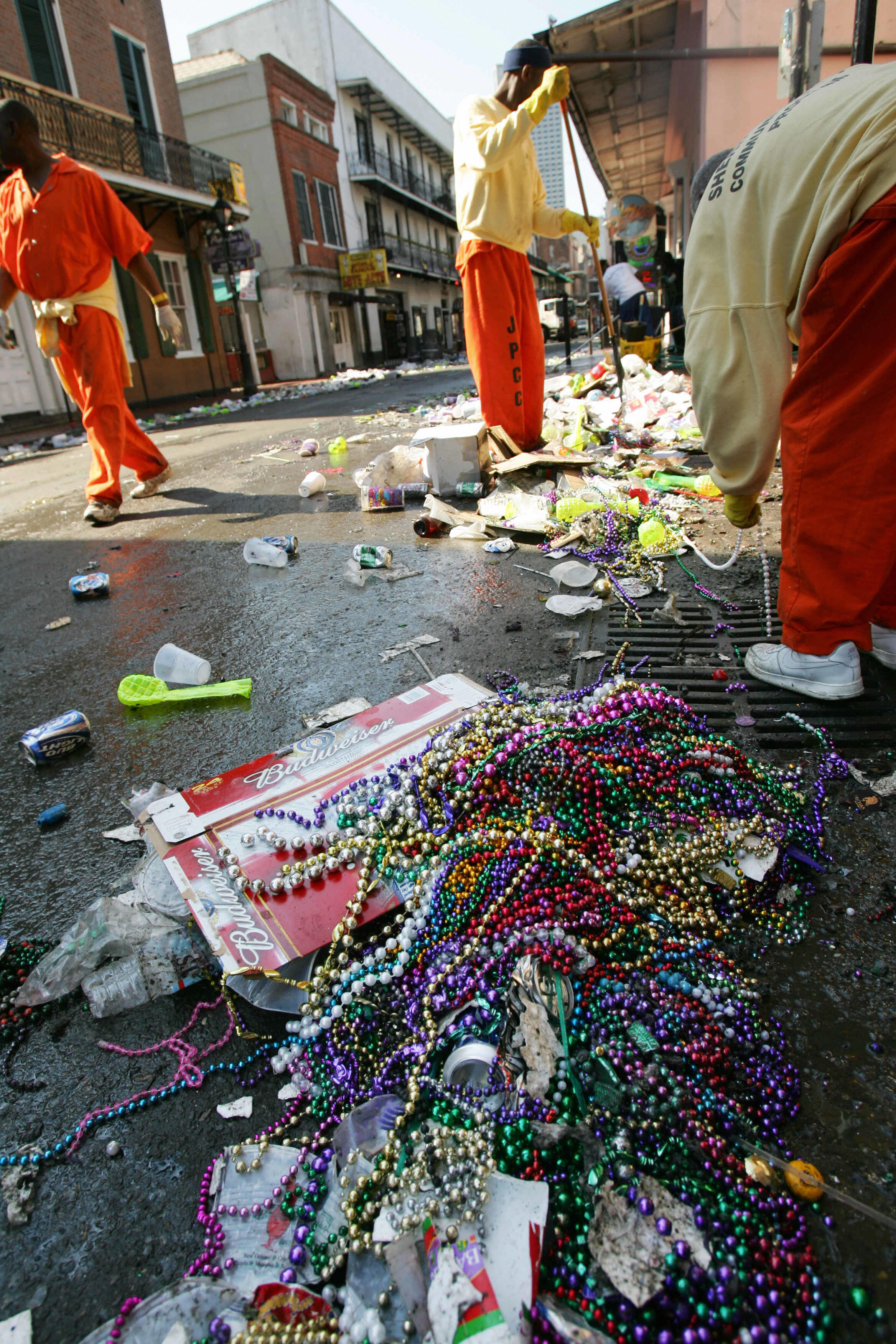 The culture of consumption and ethos of self-expression merged perfectly with the production of cheap plastic in China, which was used to manufacture disposable commodities. Americans could now instantly (and cheaply) express themselves, discard the objects and later replace them with new ones.

When looking at the entire story – from the Middle East, to China, to New Orleans – a new picture comes into focus: a cycle of environmental degradation, worker exploitation and irreparable health consequences. No one is spared; the child on the streets of New Orleans innocently sucking on his new necklace and young factory workers like Qui Bia are both exposed to the same neurotoxic chemicals.

How can this cycle be broken? Is there any way out?

In recent years, a company called Zombeads have created throws with organic, biodegradable ingredients – some of which are designed and manufactured locally in Louisiana. That’s one step in the right direction.

What about going a step further and rewarding the factories that make these beads with tax breaks and federal and state subsidies, which would give them incentives to sustain operations, hire more people, pay them fair living wages, all while limiting environmental degradation? A scenario like this could reduce the rates of cancers caused by styrene, significantly reduce carbon dioxide emissions, and help create local manufacturing jobs in Louisiana.

Unfortunately, as Dr. Mielke explained to me, many are either unaware – or refuse to admit – that there’s a problem that needs to be dealt with.

“It’s part of the waste culture we have where materials pass briefly through our lives and then are dumped some place,” he said. In other words: out of sight, out of mind.

So why do so many of us eagerly participate in waste culture without care or concern? Dr. Mielke sees a parallel in the fantasy told to the Chinese factory worker and the fantasy of the American consumer.

“The people in China are told these beads are valuable and given to important Americans, that beads are given to royalty. And of course [this narrative] all evaporates when you realize, ‘Oh yes, there’s royalty in Mardi Gras parades, there’s kings and queens, but it’s made up and it’s fictitious.’ Yet we carry on with these crazy events that we know are harmful.”

In other words, most people, it seems, would rather retreat into the power of myth and fantasy than confront the consequences of hard truth.

David Redmon is a Lecturer in Criminology at the University of Kent. This article was originally published on The Conversation. Read the original article. 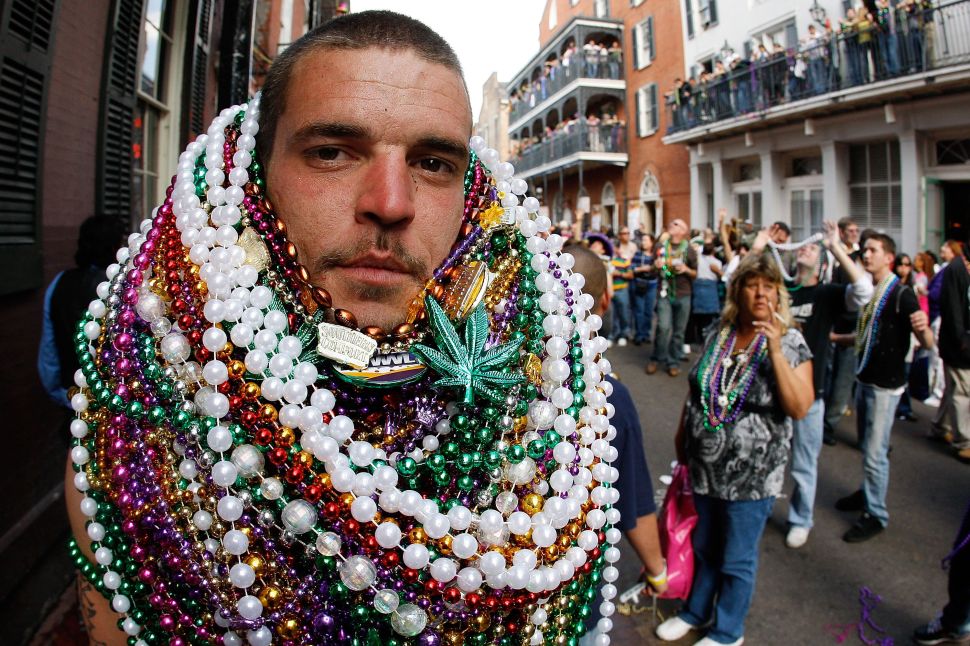