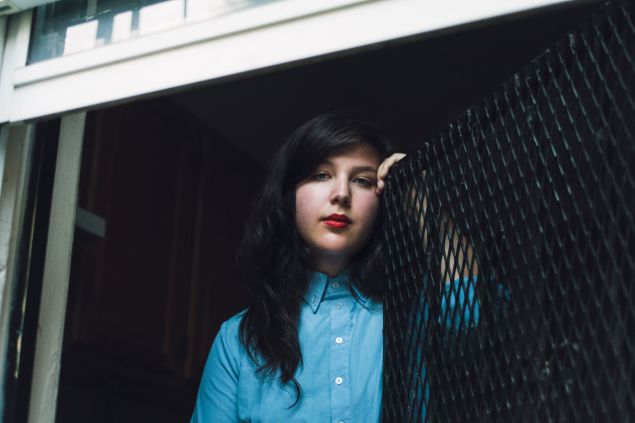 The music that we love is an accumulation of narratives. The stories those songs tell, the memories they create for us and the truths that their writers have lived all become an important rubber band ball of context and experience,  informing our connection to them in ways we don’t always immediately get.

So when a young artist emerges from the formless depths of adolescence near-fully formed, the narrative starts taking shape even before we understand it. Cries of nepotism, entitlement, and business collusion often drown out the true origin story of someone who takes to a big stage so all of a sudden, whether or not those cries have any merit. And in the case of Lucy Dacus, a 21-year old singer/songwriter from Richmond Virginia with a remarkably deep and powerful voice, no such assumptions about her recent ascension ring the least bit true.

“It’s coming from me because of me, not because of anything else.”—Lucy Dacus

Adopted at a young age and creatively nurtured by her piano-playing mother, Dacus’ musicality was embedded in her home life from the get go. Her debut, No Burden, was recorded by her guitarist Jacob Blizard as part of his winter project at music school Oberlin and released by hometown label EggHunt Records last February. Almost immediately, Dacus’ husky alto caught the attention of larger labels—over 20 of them—requiring her to take some time sifting through the muck and the mud, fielding offers and inquiries guided largely by her convictions and her gut.

Six months later she signed with venerable independent label Matador Records, and their reissue of Dacus’ No Burden last fall gave hope to this whole generation of self-starters. Dacus’ reverb-drenched, alt-country-dusted songs cut to the question of how an artist in the public eye can still live away from what Sartre called “the gaze of the other”, free from expectations of beauty or lapses in trust, living and working only by the standards they set for themselves.

We caught up over the phone to discuss what it means to take personal agency over your work in a time when art and politics seem pretty much inseparable.

Good, I’m in Canada! Hopefully my connection will be good, but if it starts to break up I’ll blame it on that.

So, were you looking at a hearse or a limousine? That lyric of yours reminds me of one of my favorite Leonard Cohen lyrics, “Thought I saw an eagle, but it might have been a vulture, never could decide.”

Much of your album speaks to trust and navigating uncharted waters, but can you unpack that rhetorical question for me?

I guess the point of that song, “Troublemaker, Doppelganger” is trying to navigate the worth of beauty, and if it’s hurtful or helpful to value beauty. If it’s a curse or a blessing. Is that something really negative and morbid, like the hearse, or is it the limousine—a glamorous symbol of enjoying life?

I’m trying to connect how your interest in the aesthetic side of media, between your time in film school and your time as a photo editor, has informed your perspective on our habits of consumption and decision making. Is that something that weighs on your mind often?

Yeah! The media, and how we’re taught to read it, has a huge impact on who we become as people. When you’re a kid you learn whatever your parents think, until you start taking in media. Because all your friends are your age as well, media is the third parent that you ever have. So I think about that a lot, what visual imagery is teaching us, and media in general having a huge impact. But it’s ambiguous—if you haven’t learned the cultural symbolism where media is coming from, it can be really confusing.

“You don’t wanna work with people who make you feel weird, even if they’re super qualified.”

You said that you felt this record was possible because you went into it without any expectations, during the writing and recording process. But the minute any work is released to the public, media expectations become imposed upon us. I guess it’s what Sartre called “the gaze of the other”. How do you keep that purity of intention during your process while operating inside someone else’s media infrastructure, an infrastructure that you didn’t build? It’s something I feel that you’re in a particularly great place to help us with.

[Laughs] A lot of the songs for the next record were actually written well before we spoke to a label or had any kind of coverage, so at least for the next record, I haven’t had to deal with that. But of course I’m still writing, and I think the biggest aspect of it that keeps me from catering to our current infrastructure is not trying to write. I don’t ever sit down and say, “OK, I need to write a song” or “I need to crank something out” or “I have to make something that will satisfy the people around me.” That’s never been a concern, I don’t think that should be a concern, and it means I maybe don’t write at a quick pace anymore, but everything that I do write is stuff that just comes to me the way any other thought does. So far it doesn’t feel like anything that I’ve written is compromised by the fact that we have a label now.

You’ve spoken about how you had to develop a bit more business acumen after this album was finished and you were shopping your project around a bit. Do you almost learn those things so that you can know when you don’t have to use them, in a way? When you don’t have to have your guard up with them?

Yeah, I really enjoy navigating the business aspect of having a band, and there is a great amount of instinct. You don’t wanna work with people who make you feel weird, even if they’re super qualified. You don’t want to feel like you’re being used by anybody, even though you are submitting to that in some way, in some mutual using of whoever you end up working with. But there’s a fine line that’s hard to describe between being taken advantage of and having a partnership. I feel like that might be different for everybody, but I would just suggest that anyone getting into this take their time and compare a lot of different companies or whatever you’re choosing. Be comparative about decision making , because you don’t have to rush into things. 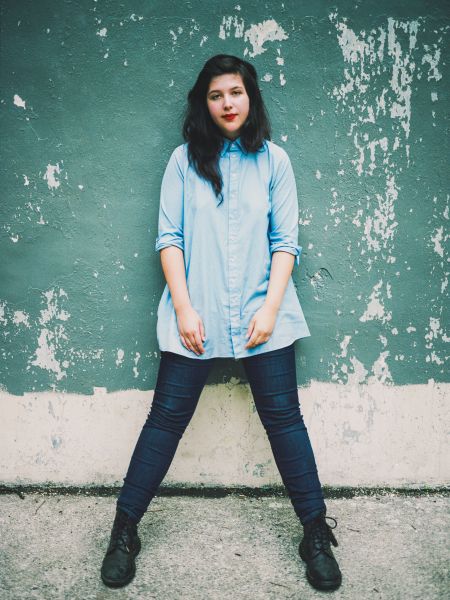 That ties into the themes of trust on this record, too, which is funny because you wrote these songs before having to navigate those waters. You wrote, “I wanna live in a world where I can keep my doors open, but who knows what’d get in and what’d get out.” Would it be a stretch to connect that lyric toward your path of ascension in the music sphere, toward your approach to how you present yourself? Are you talking about trust in the abstract here?

Absolutely. The more you learn the more wise you’re supposed to be, but I still reflect upon myself as a child, or even just myself pre-audience, kind of contemplating on where my creativity came from at that point and always trying to stay connected to why I originally started writing. I did write that song a while ago, but luckily it still rings true.

I talked to Joe Steinhardt of Don Giovanni a few weeks ago, and he’s of the mind that the big three media companies are turning into the big three tech companies, insofar as Apple, Google and Amazon are eating whole industries of art, commerce and media. It got me wondering what we can do. Now obviously you’re on Matador, and they have a great reputation around doing right for their artists’ sustainability. What are you, and they, doing right when it comes to giving artists some agency over their own work?

I guess there’s two ways to approach this question. There’s technically retaining the rights to your own music, being structurally independent and not feeding into major labels or major companies, but then there’s also this idea of retaining agency in a more metaphysical sense.

“I would hope that the music we make and tour causes people to consider not necessarily the specific current events happening around the world, but what’s behind them—power struggles, contemptment…”

I think both are important. Matador’s an independent label, which was part of the reason that we chose them. Myself, I feel like I still have ownership over my own work. Like I said, you just have to retain your writing process and not force anything. That’s what helps me feel like I still have a handle on what I make—it’s coming from me because of me, not because of anything else.

On top of that, I really like and respect bands that do more than just the typical structuring of recording, releasing and touring an album. Bands that are socially active, bands that are not afraid to talk about their belief systems explicitly. I’ve been inspired by that, and that feels like not just taking agency over your own work, but taking agency over the responsibility that you’ve been granted by a fanbase. Really contemplating your fanbase and being present with the people who listen to your music.

That begs the very timely and topical question, too—if all art comes from culture, and cultures are being stigmatized right now, then isn’t all art political? The question’s kind of irrelevant when the creative class is kind of a marginalized community in its own right, but I guess I’m just wondering how your value system responds to right now, as you come into the creative class professionally at a time when a lot of people are freaking out about the abolishment of the National Endowment of the Arts and similar public-funded avenues for creative programs or dialogues. What’s your role in pushing back against that?

The solution we came up with as a band for this tour was raising money for local charities at each of the shows that we’ve been playing. That feels like a pretty effective form of activism so far, but beyond that, I would hope that the music we make and tour causes people to consider not necessarily the specific current events happening around the world, but what’s behind them—power struggles, contemptment and these other things behind the negativity that we see, a lack of fulfillment in people.

It’s nobody’s actual job, but I personally admire people who see it as their responsibility. Whether its actual resources going to real life projects, charities or charities, that’s one piece of it. But like I said, the content of the music can really change people’s mindset, and I know that I’ve definitely been changed by some musicians and lyrics that I’ve heard. Like I said, media is the third parent to anybody. I would just hope that people write things that call for more thought instead of less thought. That could make a huge difference.

Lucy Dacus plays February 23 and 24 at Music Hall of Williamsburg with Hamilton Leithauser, which also brings them to Bowery Ballroom on the 25. All shows are sold out. 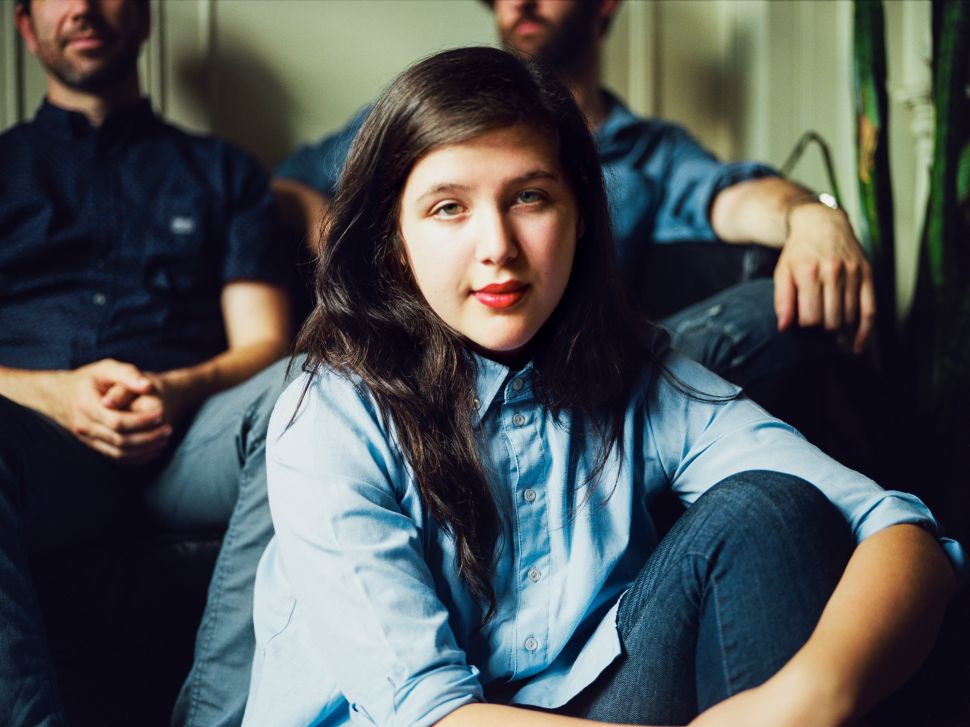