Barack and Michelle Obama aren’t the only members of the former first family who can really enjoy a luxe vacation.

The erstwhile president and first lady chose sunny destinations for their first post-presidency trip, jetting off to Palm Springs and then to Necker Island. Their daughter Malia, however, stuck with the snow—she recently enjoyed a trip to Aspen, Colorado over President’s Day weekend.

Malia is currently enjoying the freedom that comes with a gap year; she’ll be attending Harvard in the fall. She’s not lazing around before she makes her way to Cambridge, though—Malia is interning for the Weinstein Company in New York. And even though she missed out on her parents enviable island escape, Malia did make it to the Sundance Film Festival in January, during which she attended a Dakota Access Pipeline protest.

Her Aspen getaway, however, seems like it was purely for leisure…at least according to the pictures. While the very private Malia isn’t big on social media, her vacation pals did post a few photos with the former first daughter.

We assume Malia took part in winter sports of some sort, but these Instagram snaps only show the fashionable crew lunching at Cloud Nine Alpine Bistro. The ski-in/ski-out restaurant is known for fondue, raclette and apple strudel, per its website, but also for its legendary champagne parties—Malia and the underage members of the group, however, skipped the bubbly and stuck with instead, per Town & Country.

It’s not easy to compete with Barack’s vacation style, as he once famously donned a backwards hat and flip flops on the British Virgin Islands, but Malia held her own. She wore a red-and-blue beret-style ski hat, with “USA” printed on it.

Given all these comparisons to her parents chic island trip (famous friends, lavish lunches and luxurious lodgings), does this mean we can expect a photoshoot of Malia partaking in a skiing contest with, say, the aforementioned prince, à la her dad’s competition with Richard Branson? We can only hope… 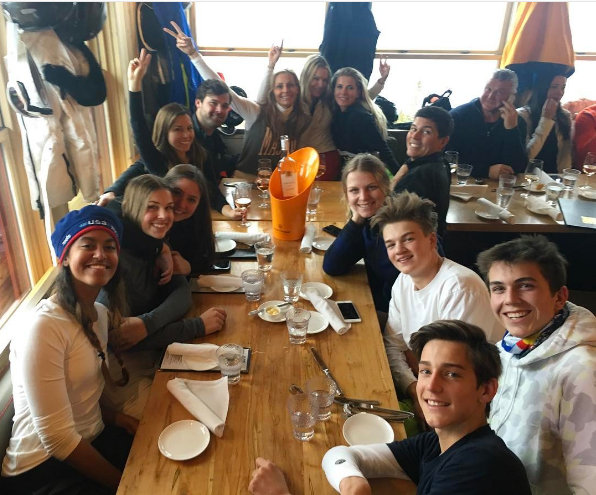