Manhattan Congresswoman Carolyn Maloney and prominent civil rights attorney Norman Siegel held an emergency rally in front of the New York Times headquarters this morning to blast President Donald Trump for barring the paper and other leading news outlets from a Friday afternoon briefing—and urged them to take him to sue him over the move.

Trump banned the Times, CNN, the Los Angeles Times, the New York Daily News, Politico, BuzzFeed, BBC, the Huffington Post and The Guardian from the press briefing—which was initially supposed to be on camera but was later switched to off-camera—with press secretary Sean Spicer. The Associated Press and TIME Magazine were allowed to attend the briefing, but they decided to skip it to show support for the other outlets.

Maloney called this an outrageous violation of First Amendment freedoms of speech and press.

“No democracy can exist without these two basic guarantees in our Constitution and we are protesting this act of exclusion,” Maloney said. “We find it alarming and that it violates the First Amendment, which protects press freedoms. It is unprecedented in modern times. It must be opposed by those favoring the free press and I would say, a democratic government.”

Maloney also said that because the Democratic Party is out of power in Washington, an attack on reporters makes it harder to hold Trump and the dominant GOP accountable.

“It is vital to our democracy and even more important now because the government cannot express its constitutional right of oversight when you cannot initiate and follow through on an investigation,” she said. “And with the Republican Party in charge of the White House, the House and the Senate, that whole right of oversight is not accessible to the minority party.”

Yesterday, Trump claimed to “love the First Amendment”—despite his barring reporters from the briefing—and repeated his belief that organization such as NYT, NBC, ABC, CBS and CNN are “fake news.” But Siegel, who served as director of the New York Civil Liberties Union from 1985 to 2000, said that Trump has a “love/hate relationship” with the First Amendment.

He reminded the crowd that Trump spent $85,000 on full-page ads in New York’s four daily papers—including NYT—calling for the execution of the five black and Hispanic men wrongly imprisoned in the 1989 Central Park jogger case.

“I call upon Mr. Sulzberger and Mr. Zucker and Mr. Murdoch and all the other owners of the media, go to court next week, raise the First Amendment issue of freedom of press,” Siegel continued. “Don’t ask for money, ask for an injunction to make sure that the Trump White House does not and cannot do what you did yesterday. We can’t be silent.”

Siegel also noted that in 1734, John Peter Zenger of the New York Weekly Journal, was arrested for criticizing the royal Governor William Crosby but ultimately was found not guilty of libel. The attorney also recalled the 1964 New York Times v. Sullivan case in which the Supreme Court upheld the right of the press to be “critical of people in power.”

Siegel said that although he and others disagree with the content of far-right news site Breitbart News Network—among the outlets that were allowed to attend the briefing—he does not object to their rights.

“We disagree with those headlines, but that’s their right to do it and we’re fighting for their right, too,” he added.

Indivisible Nation BK, #GetOrganizedBK and other New York City groups will meet in front of the NYT building tomorrow at 11 a.m. and conduct a peaceful march in support of free press and the First Amendment. 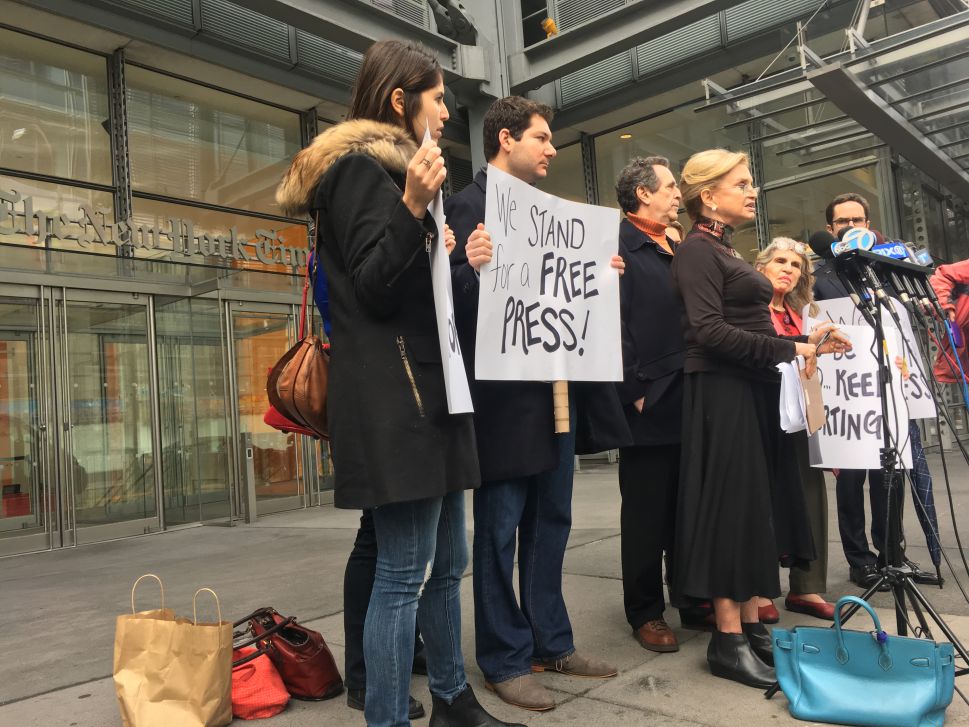