Oh boy what an episode. The LMD storyline has been a slow burn up until now and finally “Self Control,” the final episode of the arc is where it becomes every thing I could have asked for.

Let’s just get right into it. The reason this episode works so well is because it highlights the fear of LMDs. When May is replaced by Robo May, there is a certain fear that should exist but we never truly feel it because the audience already knows what she is. “Self Control” finally leaves the audience in the dark and makes you second-guess and over analyze who is and isn’t human. It reminds me of The Thing in a way; you can’t trust anyone, not even yourself.

The episode starts with some of the agents hooked up to the Framework and the Moody Blues’ “Have You Heard” playing as Aida stands over a beat up Anton. He’s not in the best possible condition since Daisy dropped a ceiling on him but Aida is taking it upon herself to “fix” him with a little help from a power saw. The real meat of the episode is with Fitz and Simmons who realize there are four LMDs in the base and they have impersonated Coulson, Mack, Mace, and Daisy. They are terrified but realize they have the advantage in that the LMDs don’t know that they know (Friends anyone?). The Robo agents address Fitz and Simmons as if there is nothing wrong and Robo Coulson puts in the order to bring all Inhumans to the S.H.I.E.L.D base for their protection. Robo Mace tries to convince Jemma to join him alone in his office to talk logistics (turn her into a robot) but Fitz has some quick thinking to keep Jemma with him until they can decipher any of the tech they picked up from the Russian base last episode. Privately, we see Robo Mace and Robo Coulson saying that they have to replace the last two agents as soon as possible and we get a very beautiful long shot (Executive Producer Jed Whedon’s directorial debut) that follows each LMD agent as they begin to plan the rest of their mission. Robo Mack puts in a call to Yo-Yo to convince her to come in and Robo Coulson activates Robo May again. This doesn’t go as well as he’d hope. Robo Coulson tries to explain that just because they don’t have the bodies of the original agents, doesn’t mean they aren’t real. That their thoughts are all that they need and the Framework now makes a world without pain or regret and where May and Coulson can finally be together.

As Fitz and Jemma try and figure out what to do next, the episode takes a terrific turn and an LMD detection unit goes off and reveals that either Jemma or Fitz are a possible LMD. I literally screamed, “YES” after this. This revelation forces Jemma to hold Fitz at gunpoint and both plead their case that they are human. It’s tearful, it’s emotional, and it’s powerful. To see the two people we want together so badly finally pushed apart is great writing. Jemma asks Fitz to cut his wrists to prove there is no circuitry and he does accordingly. There is a lot of blood. But just as Jemma lets her guard down, Fitz does a sweet knife reversal and stabs her in the leg and knocks her unconscious with a paint can. Damn.

Aida wakes up Radcliffe from the Framework and again we get a scene I’ve been waiting for since the beginning of the arc. Aida has a paradox that she can’t get past. Her primary directive is to protect the Framework but it’s also to protect Radcliffe. The conflict is she believes Radcliffe’s lack of self-control jeopardizes the future of the Framework and that one day he could regret what he made and shut it and Aida down. Radcliffe defends himself by saying he’s helping everyone with the Framework and that even though people’s physical bodies may waste away while plugged in, their minds can live forever in the perfect world. This clears up Aida’s dilemma and SHE SLITS RADCLIFFE’S WRISTS AND PUSHES HIS BODY INTO A FRAMEWORK UPLINK! HOLY F#$%! Basically since Radcliffe said the bodies don’t matter, Aida can get rid of Radcliffe’s body, upload his consciousness to preserve him and the Framework forever and not have to worry about him physically shutting her down anymore. We also learn that the four LMDs at S.H.I.E.L.D are actually Coulson, Mace, Mack and Fitz, which means Daisy was human all along(!) and Jemma is in trouble.

Jemma wakes up and Robo Fitz is trying to upload her into the Framework. He talks about how in the Framework, the two of them can finally get married and grow old together. It’s sweet albeit creepy. She’s weak but she does crawl away and manages to drop like a car engine on him or something? AND THEN SHE STARTS STABBING HIM! LIKE A LOT! Props to Iain De Caestecker’s acting who goes from screaming to stoic so quickly as he tries to reason with Jemma who slices his neck and shuts him down. Now that we know Daisy is human, we find out Robo Mack is looking for her. She’s down in the containment area double-checking that everything is good for the oncoming Inhumans and finds a room filled with LMD versions of her (15 to be exact, I counted just for you gusy). It was like Joss Whedon’s Dollhouse or what I imagined it to be like if anyone had actually watched it. Robo Mack walks in to the room and realizes Daisy has taken off her clothes to blend in with the other LMDs. Mack picks the wrong one and the real daisy blasts Robo Mack and runs away. She’s hiding in a storage room and uses a tablet to check the security feeds and is shocked to see Fitz dead with Robo Coulson and Robo Mace investigating. They say Simmons has been compromised and is an LMD but some of the other agents see the wires sticking out of Fitz’s neck and realize he’s a robot. Robo Coulson and Robo Mace quickly take them out.

Daisy is left scared and alone and finds a trail of blood next to her that leads to Jemma who straight up looks like she is from a horror movie. She doesn’t trust Daisy and Daisy doesn’t trust her. Simmons even says, “that you don’t know you’re a robot until they kill you,” which is a hell of a line. Daisy realizes that an LMD can’t have her powers so if Simmons will let Daisy quake her, she can prove she is who she says she is and the quake can tell if she has normal bones instead of metal. It’s surprisingly logical. They prove to each other that they both are human and now we get a badass women team up.

The base is on lockdown and Robo Coulson is telling the rest of the agents that Daisy and Jemma are LMDs. With everyone against them, Jemma and Daisy don’t have much hope. They believe their friends must still be alive but still don’t know where to look. They realize that if they can get off this base and hack into the Framework, it could be possible to find everyone but that means staying alive first. Everyone is looking for them and Jemma and Daisy gas the base knocking the human agents out cold, leaving just the LMDs walking around. Robo Mace and Daisy have a super cool fight in the dark and even quakes herself into the air to do a drop punch. It’s just really cool and I had to mention it. Just as she takes down Robo Mace, Robo Coulson and Robo Mack shoot her and as they move in she charges up a quake that’s so powerful it shreds Robo Mack apart. The agents no one really cares about wake up and realize that Jemma and Daisy are telling the truth and they go to escape on the zephyr jet. On their way back, Jemma and Daisy are confronted by Robo May who is sitting on a bunch of explosives. Uh oh.

The final moments of the episode have Robo Coulson find out that Robo May let Jemma and Daisy board the jet despite her orders. She reveals that her programming is different than Robo Coulson and that she was made to help the real Coulson and that’s what she did. She says the pain and regret Robo Coulson can’t feel is what made Coulson into the man she loves and then she blows them up. The zephyr jet manages to escape in time and on board we have the agents no one cares about, Yo-Yo who we care a lot about and just happens to show up in time, and Jemma and Daisy who are uploaded into the Framework for one final gambit. I’ll get into what the Framework is like in a second, but first I’ll mention that Aida has finished building Anton’s body and we find out he is all machine now but being controlled remotely by his severed head. It’s gross and weird and cool. Aida even gives Anton the Darkhold to read but we finally find out what it is she wants and it’s what they’ve been building to all season: Aida just wants to feel emotion. She just wants to be human.

Okay and now for the good stuff: The Framework. What’s going on in there? Well first, Daisy wakes up in a tub and gets a text telling her to wake up her boyfriend who she believes to be Lincoln in this perfect world but we get to see who it actually is from a photo on their dresser and it’s none other than GRANT WARD. HOLY $#!%. Yes Ward will be back next season, ladies and gentlemen. And what about everyone else in the Framework? Well Coulson is a teacher teaching students why to fear Inhumans. Strange. Mack has a daughter again. That’s nice! Fitz is successful and rich (or at least that’s the vibe I’m getting from the suit and limo) and it looks like he’s married to Jemm-wait. Nope. JEMMA IS DEAD. Yup, we see her grave so no idea what is going to happen there now that she is uploaded as well. And lastly, May is in the Triskelion (The S.H.I.E.L.D headquarters that was damaged in Captain America: The Winter Soldier) and it almost seems as if she’s the Director of S.H.I.E.L.D-wait. Nope. IT’S HYDRA. This just gets better and better! I don’t know about all of you, but I’m excited. These are most likely the final 7 episodes of the series and there is no better way to wrap it up than the final arc, which will fittingly be called Agents of Hydra. But we do have to wait until April 4. So until next time, True Believers! 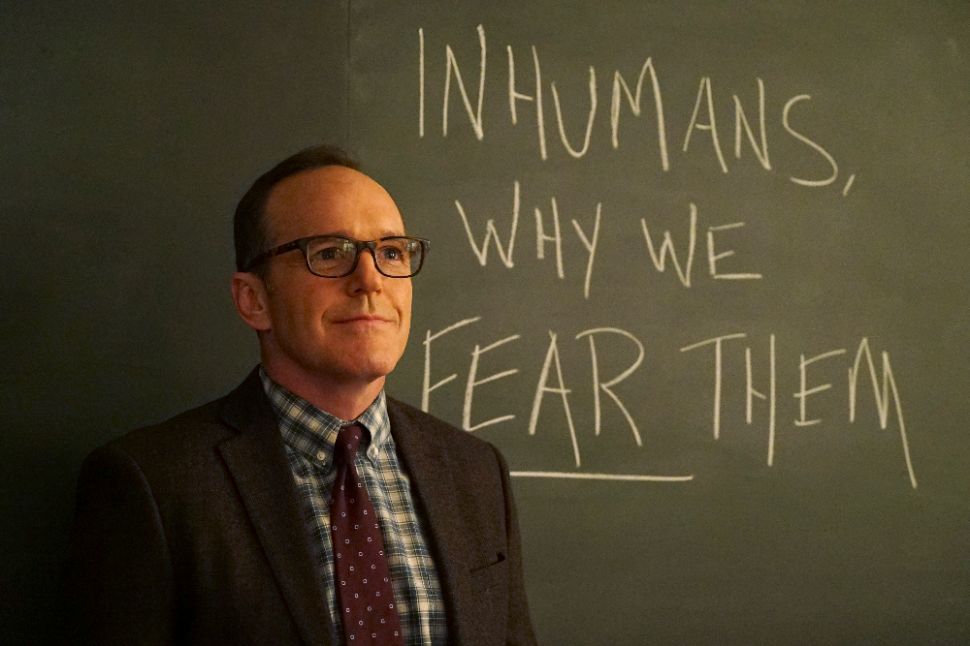