It didn’t matter who President Donald Trump picked as his Supreme Court nominee. Protesters were already prepared to label the pick an extremist, made painfully obvious by their gathering outside the Supreme Court building just waiting for an announcement.

To my pleasant surprise, many in the media have actually embraced Neil Gorsuch in a way I was not expecting. NBC New’s Chuck Todd said Gorsuch “made an incredible first impression” and suggested Democrats would have a hard time voting against him once they met him. Slate’s Mark Joseph Stern wrote that Gorsuch “is not a villain” and “He conveys his ideas fluently and courteously and is well-liked by his colleagues on the left and right.” Former senior adviser to President Barack Obama, Danielle C. Gray, said Gorsuch “resembles Chief Justice Roberts, he resembles Chief Judge Garland.”

Actually, I’m not sure if that last one was mere praise or a subtle insult to the right. Judge Roberts, you may recall, saved Obamacare twice. He had to ignore the plain text of the law in order to do so. Roberts was also considered a danger and an extremist by the Left when he was nominated, yet he helped Obama’s signature policy survive.

Some 20 prominent Democrats are also supporting Gorsuch, making opposition to him seem more about partisan spite than actual criticisms. Democrats, who were once in favor of blocking Supreme Court nominees during a lame-duck presidency, were incensed that Republicans suggested the same during the last year of Obama’s presidency. Now they want to block any nominee just because, justifying their childlike behavior by calling the vacancy a “stolen seat.”

I mean, it’s not like Republicans couldn’t have seen this coming. Trump certainly saw this coming, and I wouldn’t be surprised if that’s part of the reason he nominated Gorsuch. Because the Left has to come up with some pretty dumb ways to attack him.

Buzzfeed has had the hardest time trying to attack Gorsuch, going to great lengths to turn non-stories into something seedy. On Jan. 31, Buzzfeed’s Zoe Tillman wrote an article titled: “Gorsuch Would Join The Supreme Court Millionaires’ Club If He’s Confirmed.” That’s seriously the most interesting (and it appears, to Buzzfeed, to be the most dangerous) information in the entire article, which is actually about how Gorsuch doesn’t own stock in individual companies like other SCOTUS justices (which can occasionally create conflicts of interest). In fact, the whole article is a boring breakdown of Gorsuch’s finances, but ultimately finds that Trump’s nominee “has few financial entanglements that could create conflicts of interest with cases if he’s confirmed” and “said he didn’t accept any gifts in 2015, and had no financial liabilities.” He’s also had no disciplinary action brought against him.

What a nothingburger of an article. The only think Tillman could do was to bring up Gorsuch’s net worth, because we all know how the Left hates rich people (except for the politicians and celebrities that spout their talking points). Gorsuch’s reported financial assets are worth at least $3.3 million as of 2015. They could be higher. Who cares? We know judges are well-compensated, and he teaches on the side (for an annual salary of $26,000). He’s not making seedy stock decisions, he just has a brokerage account, and IRA, a money-management account and a retirement fund.

This wasn’t Buzzfeed’s only problematic reporting on Gorsuch. Hours after Trump named Gorsuch as his nominee, Buzzfeed’s Chris McDaniel published an article titled: “Trump’s Supreme Court Pick Determined That A Badly Botched Execution Was An ‘Innocent Misadventure.’” Except Gorsuch determined no such thing.

The case in question was about a rapist murder getting executed, only the lethal injection they gave him didn’t work properly and caused massive swelling on his leg. The Tenth Circuit Court of Appeals, where Gorsuch currently serves, determined the convict’s rights (those against cruel and unusual punishment) weren’t violated because of a mistake or freak accident caused during his lethal injection. For his rights to have been violated, there would had to have been intent from his executioners, but the court found none.

Also, Gorsuch didn’t write the opinion, an Obama appointee did. And the “innocent misadventure” phrase came from a previous Supreme Court ruling, which was quoted in the opinion cited by Buzzfeed.

Because Gorsuch was nominated by a Republican president, he will be branded a woman-hating, racist monster (even though he’s never ruled on abortion and has defended the religious rights of Muslims).

With so many on the Left and in the mainstream media praising Gorsuch, it will be difficult for Democrats to refuse his nomination. That won’t stop them from trying to paint him as some kind of monster, however. 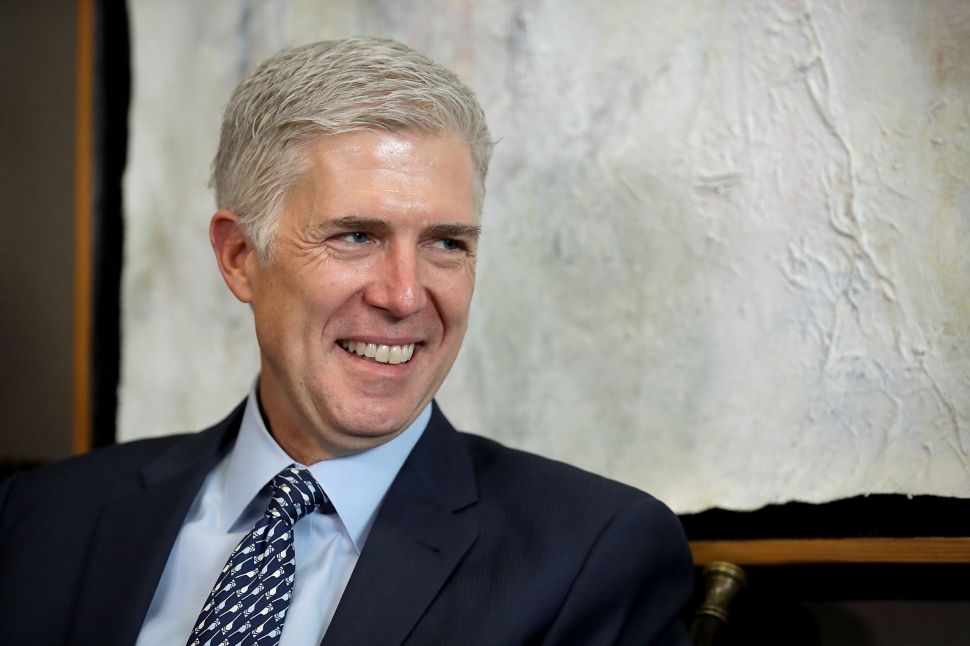