At the annual World Hijab Day celebration, City Council Speaker Melissa Mark-Viverito declared that Muslim women are “at the forefront of the resistance” against President Donald Trump‘s Muslim travel ban and intolerance of others—and expressed her solidarity with the Muslim community.

She added that the Muslim community is diverse, remarking that Muslims are African, African-American, Arab, South Asian, Asian and Latina, among other ethnicities.

And she noted that while the Muslim community has long dealt with intolerance, the Trump administration has created an “incredible, tense climate” filled with division, separation, scapegoating and fear. She said it is a sign that all communities have to come together in solidarity.

“We’ve been out in the streets almost every day in response to these executive orders that just keep raining down on us and wreaking havoc,” Mark-Viverito said. “There is chaos all around us and what it is doing again is just eliciting fear and division, and many of our communities are targeted. So I’m standing here as a Latina in solidarity with my Muslim brothers and sisters.”

NYPD Officer Aml Elsokary, a Muslim whom a Brooklyn man menaced with anti-Muslim slurs last year, said she was proud to call herself one of 900 Muslim officers who serve the NYPD “and put our lives on [the] line.” She also commended the mayor for supporting cops who wear hijabs.

“I’m also proud to be part of a police force that accepts and embraces diversity,” Elsokary said. “They allowed my hijab and they supported me through the times where other people looked down on me wearing a hijab.”

World Hijab Day is a day of solidarity with Muslim women worldwide and in recognition of million of Muslims who choose to wear the traditional head covering. The celebration, which began in February 2013, centers on combatting bigotry, discrimination and stereotyping against Muslim women. Southeast Queens and South Asian activist Mazeda Uddin is one of the organizers of the New York City event.

Afaf Nasher, executive director of the New York chapter of the Council on American-Islamic Relations, said that they are “pulling and pushing every single day” to ensure that all Americans are treated equally and enjoy the rights guaranteed by the United States Constitution, the Civil Rights Act and “every single law that every American is entitled to.”

“Today, what we are here for is to promote and celebrate World Hijab Day, which is a day really to protect a women’s ability to express herself religiously without concerns or fear of intimidation, discrimination or hatred,” Nasher said.

Manhattan Borough President Gale Brewer, for her part, took a jab at Trump and praised the contributions of Muslim women to the city.

“We are 8.5 million people, we speak 150 languages,” Brewer said. “Immigrants bring $100 billion to the economy of the city of New York and they own 83,000 businesses. Now president, get lost…Women who wear hijabs are the backbone of our community.”

Representatives from the city also came out to show their support for Muslim women. Carolyn Malalis, commissioner of the New York City Commission on Human Rights, said that it is illegal to discriminate against individuals because of their religion and that the city embraces diversity and inclusion.

“The Commission on Human Rights will use every tool at its disposal to make sure that we maintain, we keep that diversity, that celebration that is New York City,” Malalis said. 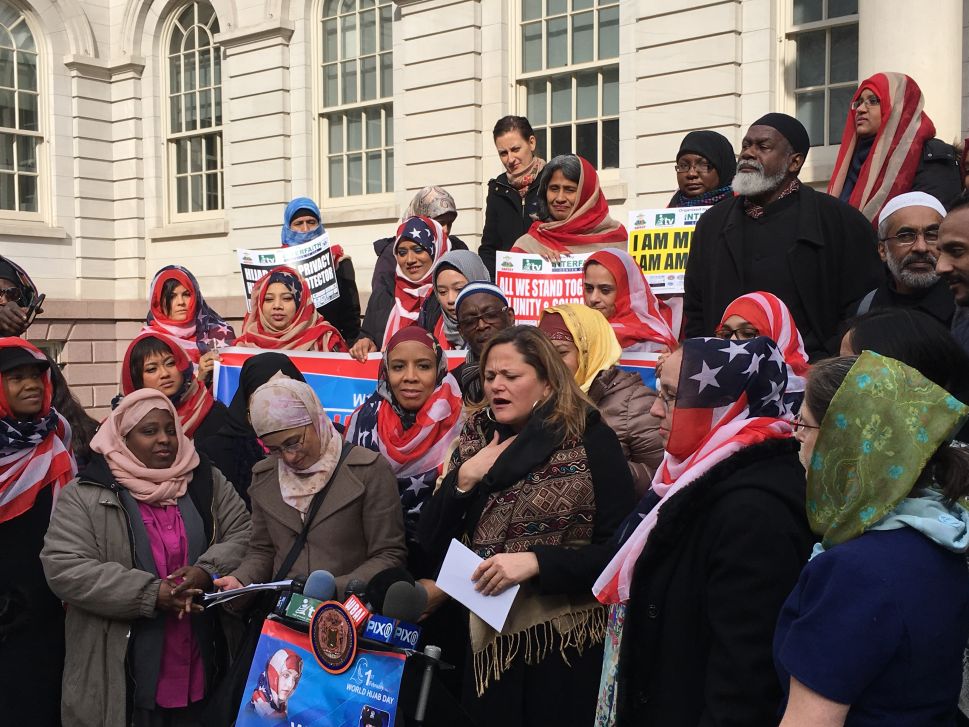