City Council Speaker Melissa Mark-Viverito announced in a television interview today that she would back Mayor Bill de Blasio “strongly” for re-election this fall and be an “ally” in helping him fulfill his agenda—seemingly killing rumors the term-limited legislative leader might seek the city’s top post herself.

The endorsement, made in an interview with the program MetroFocus and due to air on WNET THIRTEEN at 6 pm tonight, comes as little surprise given the tight relationship between the two. Mark-Viverito was one of the earliest supporters of de Blasio’s mayoral bid in 2013, and he put immense pressure on Council members to support her for speaker after the election.

Mark-Viverito has largely shepherded the mayor’s agenda through the legislative process, and obstructed measures he opposed, such as police reform bills and improved disability benefits for first responders.

“I support Mayor de Blasio strongly,” Mark-Viverito said. “I believe that the policies he has put in place have uplifted and helped millions of families in this city so I support that legacy in continuing that work. Obviously, I want to continue to support and be helpful to New York City, whether it’s in elected office or not. I keep—you have to be prepared and you keep options open.”

The first Latina Council speaker’s future has been the subject of intense speculation, given that her position has granted her enormous power and prominence locally, particularly in the city’s Latino community. She became a high-profile surrogate for Hillary Clinton, and many suspected she might receive an immigration-related post in the anticipated Democratic administration.

That, of course, did not come to pass. Rumors have swarmed she might run for anything from Congress to the governorship of her native Puerto Rico.

But the speaker insisted to MetroFocus that her main aim will be helping de Blasio win re-election. To that end, she vowed to campaign aggressively on his behalf.

“Right now, the mayor is running,” Mark-Viverito continued. “He has my strong support and I’ll be out there in communities letting people know why he is the one to continue to represent this city, and I wanna continue to be an ally to fulfill that agenda that he has in place.”

In her final State of the City speech, Mark-Viverito unveiled a slew of proposals, including blocking Immigration and Customs Enforcement officers from most spaces on city property, free birth control for all women, a significant expansion of the mayor’s Office of Immigrant Affairs and prohibiting local law enforcement from coordinating with the federal government in crackdowns on foreign nationals.

She also used her final vision-setting address to attack President Donald Trump and his immigration policies.

Mark-Viverito stressed tonight that she also sought to deliver uplifting message of valuing women’s reproductive rights and to “highlight the positive aspects of who we are.” She would not offer much of a preview of her own future ambitions, except continuing to oppose the presiden’t agenda.

“So whatever there is, I think there’s definitely a national role to play, but obviously continue to contribute to New York City,” she said. “I definitely will be visible here and will continue to support my city.” 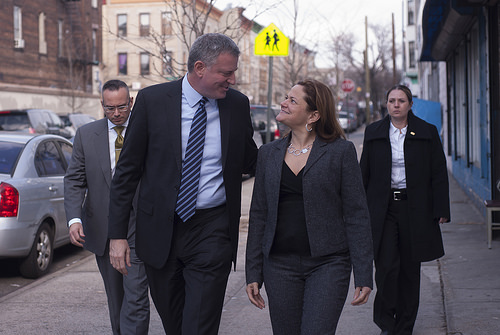