The top spot on our American Menswear Power List, Billy Reid, returned to the New York Fashion Week: Men’s schedule on Monday night. Crooner Karen Elson strummed as Reid’s Autumn/Winter 2017 collection paraded in front of an intimate crowd of just 104 guests. The rest of the brand obsessives were welcomed to join in on the fun in the basement of the Beekman Hotel, which had been outfitted for the evening as a gritty speakeasy. Winston Marshall of Mumford & Sons deejayed while guests enjoyed small bites and cocktails by Chef Tom Colicchio, whose restaurant Fowler & Wells recently opened in the hotel lobby. Also taking care of tunes was the newly-created “Billy and the Rock Bottoms,” an eclectic jazz group Reid had met (and hired on the spot to play the party) just 48 hours earlier at actor Alexander Sharp’s birthday gathering. Reid’s pals who grooved into the wee hours at the basement soirée included comedian BJ Novak, footballer Dale Moss, and rapper Young Paris in his signature face paint.

On Tuesday night, East Dane & Amazon Fashion held a secretive party in their NYFW: Men’s lounge. Behind a hulking black partition #menswear insiders yukked it up with champagne, air hockey, and beats spun by Brendan Fallis. Rapper Fabolous opted to sport a white fedora which he had plucked from a mannequin a few moments earlier from CFDA-minted milliner Gigi Burris’ men’s presentation, while Colton Haynes rocked a bandana from the coveted (and yet-to-launch) Louis Vuitton x SUPREME collection.

Wednesday brought the first of many upcoming milestones for Public School, the New York-based power house brand designed by fashion darlings Maxwell Osborne & Dao-Yi Chow, both of whom earned a spot on our American Menswear Power List. The two gents spent the night celebrating their first foray into retail inside Cadillac’s Retail Lab on the corner of Hudson & Charlton Streets. Chef Eddie Huang joined the crew, holding court on the back of a white Cadillac coupe outfitted as a shopping display, as well as Retail Lab’s founding collaborators, Timo Weiland & Alan Eckstein.

Louis Vuitton’s sprawling new Soho store opened its doors to select guests on Thursday evening. The Peter Marino-designed space features an art installation by Shuji Mukai, both of whom were in attendance sporting their respective signature regalia. The store also comes complete with a “men’s universe,” situated below the main floor, which NYFW: Men’s party goers flocked to for a look at the latest Kim Jones-designed collection. The only thing missing? The Vuitton x SUPREME collection. Unless you’re one of the lucky few who have scored runway samples, like the aforementioned Colton Haynes, you’ll have to wait until the collection hits stores this July. 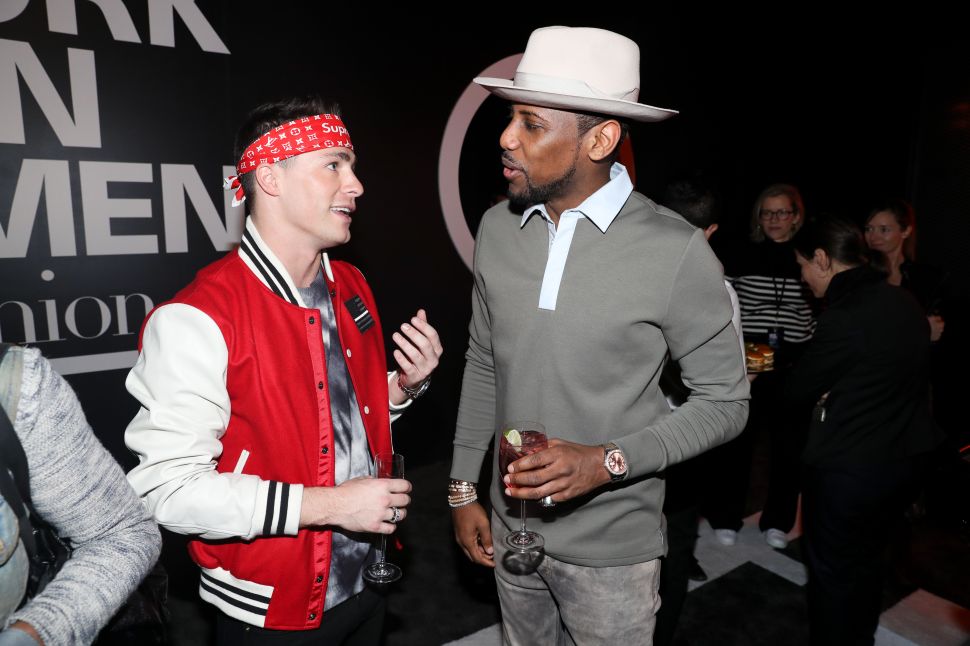