2017 is young but there’s no arguing it’s been a political shit-storm of epic proportions. The silver lining? There’s always the escape that music provides and although February is a short month, it’s long on mighty, must-see shows. So go do your protesting, donate to good causes, and then chill out with the month’s best concerts.

Sleepyhead, The Special Pillow, Sloppy Heads and Bob Carol Ted at The Gutter on Saturday, February 4

It’s no wonder mysterious fuzz-dipped art-pop heads Sloppy Heads conjure images of record-collecting geeks nerding out on their vinyl collection while testing out Velvets-inspired jams on their econo four-track: James McNew, burly bassist of Yo La Tengo and brainchild behind bedroom-fi pioneers Dump, recorded and guested all over the trio’s just-released, candy-sweet and feedback-coated debut, Useless Smile.

Matthew Shipp Trio at The Cutting Room on Thursday, February 9

Next week the Observer will feature an in-depth look inside the ever-adventurous sound world and uncompromising mind of piano vanguard Matthew Shipp, an East Village stalwart who, as he approaches 60 years of age, shows no signs of slowing down, remaining a creative force to be reckoned with.

Sure, the bespectacled keys tickler is currently threatening retirement from recording (again) after a solo piano set for famed free jazz label ESP-Disk is released sometime in 2018. Thankfully, that’s a long ways away and in the subsequent year-and-change, out-jazz buffs will be able to feast on a slew of Shipp efforts. Most notable is the record Shipp and his Trio (bassist Michael Bisio and drummer Newman Taylor Baker) are celebrating the release of this evening: the terrific Piano Song, which is his final record for Thirsty Ear Records after a long and illustrious career.

Guitar eclectic Nick Millevoi is as pliable an ax-swinger as they make ’em. The freewheeling Millevoi has aced math-jazz chaos with Many Arms, Jewish doom metal crunch with Deveykus and guitar-versus-trombone-minimalist-skronk in Archer Spade with Philly pal Dan Blacksberg.

In 2016, Millevoi made his case as heir to the guitar king throne of Nels Cline when he joined forces with his Many Arms bandmate/bassist Johnny DeBlase, pianist/Rhodes keys maestro Jamie Saft and Marc Ribot Ceramic Dog drummer Ches Smith on Desertion, one of our top picks for best experimental records of last year.

A scorched-earth masterpiece of epic stoner desert-rock trippiness that channeled the fretboard-skipping solo mastery of both Neil Young’s Ragged Glory and the wickedly bleak cinematic minimalist guitarscapes of his Dead Man soundtrack, Millevoi showed he can dish out country home twang as much as the tech-metal he does in Hollen-Voi.

Tonight, Millevoi and his current band (DeBlase and Talibam! drummer Kevin Shea) will test out new material from their just-recorded second effort and songs from Desertion.

Tonight promises to be an otherworldly wedding of righteous sounds and words when Connors joins forces with a pair of outliers: flutist/vocalist Isobel Sollenberger of Philly psych-rock institution Bardo Pond and ubiquitous downtown NYC poet and jazzhead-about-town, Steve Dalachinsky.

Cinema Cinema at PIANOS with The By Gods, Legz, The Trnsnts and Eric Jackson on Sunday, February 12

The culmination of those schizoid influences and more is manifested on CC’s upcoming fourth rager, Man Bites Dog, another deranged slab of prog-tweaked, metal-inspired, neck-breaking riff-dizzy punk, once again caught on tape by super-producer to the noise-rock stars Martin Bisi (Sonic Youth, Swans, Helmet) and featuring Darriau on a handful of tracks. Earplugs highly recommended as Cinema Cinema have been known to scare rooms into submission.

A trio of monumental heaviness, BIG were one of SST Records’ best kept secrets in its 1980s heyday and had the avant-garde jazz cred to boot: downtown kingpins John Zorn and Bill Laswell were early champions of the slow-crawling metallic riffers and dub-centric enthusiasts.

The alliance with Laswell as producer soldiered on with comeback record Before Ever After and here guitarist Andy Dawkins, bassist Will Dahl and drummer Tim Wyskida (of Khanate) continue its amps-stacked sonic assault on the senses with a semi-rare appearance. Arrive early for prog-metal locals STATS, who have since added vocalist Nick Podgurski (New Firmament/Feast of the Epiphany) since 2015’s overlooked Mercy.

Drummer/bandleader Ches Smith is a protean smasher of myriad genres. The longtime Brooklynite has done electronic-based minimalism and solo drumscapes with his one-man project Congs for Brums, big-band jazz with These Arches and is the sturdy and manic anchor for Marc Ribot’s Ceramic Dog.

However, The Bell—Smith’s debut as leader for the prestigious ECM label—may be the composer’s defining statement, at least until his next effort. With his tapping of pianist Craig Taborn and violist Mat Maneri to help interpret his unique vision, Smith crafted a ghostly and unsettling portrait of chamber-jazz and classical music deconstruction that the Observer rightfully highlighted in our best jazz albums we missed in 2016 list. Don’t miss these two chances to see these three master improvisers recreate The Bell in the live setting.

Over its forward-thinking 20-year stretch of protest-minded experimental rock, NYC instrumental power trio Harriet Tubman have played a crucial role in ushering the downtown out-music movement with a politically-wired fusion of funk, jazz and dub that is spiritual as it is shred-heavy.

Mostly Other People Do The Killing at Cornelia Street Café on Sunday February, 19

For starters, Elliott and his rotating cast of fellow provocateurs have spoofed the album art and title of This is Our Music by Ornette Coleman (MOPDTK called theirs This is Our Moosic), and are still feeling the reverberations for their note-for-note rendition of the album that’s known as jazz’s greatest achievement: Mile’s Davis’s 1959 masterwork, Kind of Blue. With their 2014 version (they called it Blue), MOPDTK ignited a controversy where they were actually labeled racists and their musicianship was questioned, sparking a debate that’s still resonating today.

After that detour into uncharted Miles territory, MOPDTK returned to its peppy post-bop rollick form on 2015’s Mauch Chunk. Now Elliott has upped the old timey romps and shits ‘n’ giggles like he did on 2014’s Red Hot.

He’s also ballooned his lineup to a whopping septet with trumpeter Steven Bernstein (of Sex Mob and John Lurie and the Lounge Lizards), saxist Jon Irabagon, trombonist Dave Taylor, banjo shredder Brandon Seabrook, pianist Ron Stabinsky and Talibam! drummer Kevin Shea. On the new Loafer’s Hollow, these zany jazzheads bounce, swing and thump with abandon as they pay homage to the 1920s and ’30s swing, bowing down at the altar of the legendary Count Basie.

Extreme-music brutarian Weasel Walter first served as fearless ringleader of large ensemble free jazz tsunamis back during his days in the Bay Area and now the Lydia Lunch Retrovirus and Cellular Chaos guitarist has birthed its East Coast iteration with cataclysmic force that puts his previous endeavors to shame.

Local musician Ryan Walsh, a longtime member of The Glenn Branca Ensemble and his own experimental outfit Neg-Fi, tragically passed away last December. Tonight, many of his peers including, Notekillers guitarist David First and Rick Brown (75 Dollar Bill) & Sue Garner (Run On) come together for a concert to honor his memory.

A free-improvisational firestorm is sure to engulf the incredible confines of the cavernous Park Church Co-op tonight as it hosts the debut of jazz/metal terrors GRID (Tim Dahl of Child Abuse and Lydia Lunch Retrovirus, Nick Podgurski of New Firmament and STATS and Matt Nelson of Premature Burial and Battle Trance) alongside the spoken word-cum-cello assault of Rodenticide’s Samantha Riott and Leila Bordreuil, the sax/drums ear-bleeding grind of subway crasher Tamio Shiraishi and Les Ret and the classification-defying alien experimentation of Elder Ones.

The slow-building sonic marathons experimental jazz Australia trio The Necks specialize in resulted in a pair of outstanding albums (2015’s Vertigo and 2013’s Open) for the Northern Spy label that brought them a new audience here in the States. Here, The Necks celebrate three decades of groundbreaking experimentalism with three nights of entirely different performances at Issue Project Room.

This year’s four-day sound/dance/video Mixology Festival spectacular stars a host of knob-twiddling tweakers like Greg Fox, Olivia Block and Eli Keszler but is most noteworthy because Mixology curator Michael Schumacher will be debuting a new composition from the elusive Jim O’Rourke, who will not be present.

Boston psych-rock slayers Major Stars will melt your face off with epics from their new buzzsawing mind-blow Motion Set tonight.

Hailing from Mauritania, Africa, Noura Mint Seymali churns out a shapeshifting blend of psych, blues and dance music using the ardine (a type of harp) that is utterly transcendent.

Brooklyn-via-Minneapolis piano whiz Craig Taborn welcomes in the release of his third record for ECM, the exquisite Daylight Ghosts, at the Vanguard with his all-star quartet of tenorist Chris Speed, bassist Chris Lightcap and drummer Dave King. 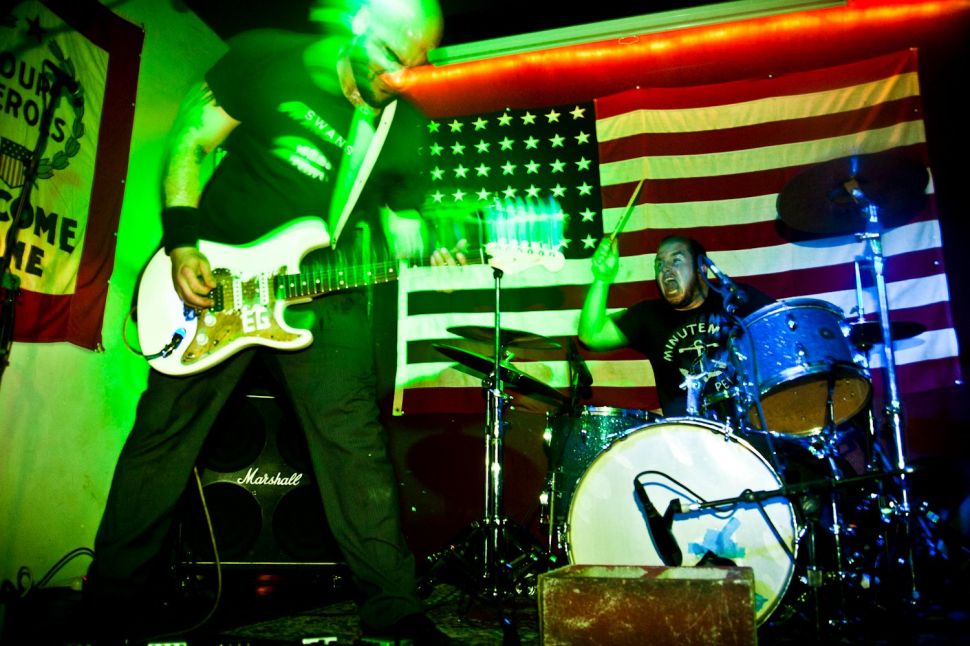