Moon Duo learned that removing yourself from the noise and distractions of civilization are the greatest way to listen. Over four full-lengths and an EP, singer and guitarist Ripley Johnson and keyboardist Sanae Yamada have carved out a sacred sound all their own to meet at the strange, uncharted gates of cerebral psych-pop.

A trip into the woods to record their new album was nothing new for the duo, but it enriched their process with a heavy reading list of gnostic and hermetic authors like Aleister Crowley, Mary Anne Atwood and Colin Wilson, and intently focused them on channeling the natural magic of dusk in the woods of the Pacific Northwest, yielding their strongest collection of songs to date.

Today marks the release of Occult Architecture Vol. 1, the first half of a song cycle that Moon Duo realized held two distinct energies. Vol. 1 lives soley in the Chinese Yin—“the shady side of the hill” associated with the feminine, darkness, night, and earth. That Moon Duo are sharing it with us in the dead of winter is no coincidence.

“Go out during these magic hours, into nature. That’s when you start seeing flickers of things.”—Ripley Johnson

The swirls and the drones of Johnson’s other band Wooden Shjips can be heard through Occult Architecture, while Yamada’s textured compositions grant an unordained sense of melody to even the heaviest of riffs. From Yamada’s modulated, pulsing synths that open “The Death Set” to the grandiose climax of “White Rose,” a change occurs—more major chords creep in, the journey starts to brighten, and the promise of spring can be heard by those who take good care to listen.

Johnson and I got heady about intent, meditation, self-imposed exile and David Lynch. Whether or not you find yourself going down into the swirling gyre of nature’s mysteries with the Duo, there’s a deeper wisdom here. And opening yourself up to receiving it is the first step.

So Aleister Crowley had his whole thing, “Do what thou wilt, that shall be the whole of the law,” right? And we can take will, or willpower in the abstract to refer to the power of human beings to stretch ourselves and do things perhaps previously thought to be not possible. It’s hard for me to not see that theme as important to you, especially with your tendency to remove yourself from the noise when you go off to record. Going off in the woods, and you putting yourself in a headspace to make a collection that worked on this plane, was that something you were conscious of from the outset?

It’s definitely something we’re conscious of. A lot of the time when you do these things it’s simply a reaction to whatever your circumstance happens to be, and then, if you’re lucky, you do have the control where you can say, “I’m gonna go here, and I’m gonna write this, I’m gonna go here and record this.” Which is a great luxury, because usually when you’re starting out as an artist you’re just stuck somewhere. You’re just working with whatever you have.

And that’s my experience, starting out in San Francisco. I’d been there so long, and when we started releasing records people would ask these questions. I didn’t really have an answer until we moved to Colorado, [until] we moved to the mountains. I really felt the effect of the environment. Starting and being in San Francisco, I had nothing to juxtapose that to. I became conscious of its influence after I’d left.

It’s funny how the artists in this country now have to be in a position of not means, but resources to take a step back, almost, to get out and afford to get away for a little bit.

Yeah, there’s not a lot of support as far as that’s concerned. Usually you’re on your own until you make something that people enjoy or wanna pay for. And by that time you’re just promoting it, or touring. It’s already done. So it becomes kind of backwards.

“If you put yourself in the right mind space, if you open yourself up to all kinds of experiences, part of that is intention…you create your own reality, really.”

So I guess you’re saying there was some conscious willing of purpose on this record, at least between the books you brought with you and the energy you saw manifesting in the sounds as the seasons changed.

We started steering it in that conscious direction. We started noticing a dark theme and a light them in the songs, and instead of making one record and maybe in the process smoothing over some of those differences to find some unified sonic, thematic whole, we decided to break it in two. And we had a lot of material.

A lot of times, bands will go into the studio and wind up with way more than will end up on the record, and a lot of it usually isn’t good enough to make the record. But in this case, we felt strongly about the material, so we decided to consciously cleave it in half, separate them out, and mix them separately in separate places so they would have a different spirit and there would be a separation between the times we mixed them—just an environmental difference.

This Colin Wilson quote feels relevant: “Religion, mysticism and magic all spring from the same basic feeling about the universe, a sudden feeling of meaning, which human beings sometimes pick up accidentally as your radio might pick up some unknown station.” Did you tap into something…that…was beyond you? Some primacy of place or setting that you couldn’t have predicted? Did you tap into some energy outside of yourself, not necessarily divine, but bigger than you?

Um, we feel that way all the time. [Laughs] It’s a matter of reminding yourself, and that’s where awe comes from, you know? That’s where religious awe comes from, I think, and that’s why it’s important to us to have some connection with nature. That’s one of the purest ways to feel that awe. But in this case, it was just a matter of trusting and letting go. And I’m kind of a control freak. So once we had the framework, we let it go.

It’s definitely denser and heavier and more in the heavy psych realm than anything I’ve really heard from you guys before. But it still maintains your sense of tunefulness, and I can already hear on “White Rose” the beginnings of a transition into the next volume. It’s a little bit brighter. What did you learn from all of this about the nature of building a spiritual song cycle?

I have a casual interest in the occult and all of that stuff. You know, I find it kind of poignant that there are these people who are looking for answers, and were looking for something beyond the every day, beyond the mundane reality that people were expected to follow. They were seekers. And so we took inspiration from that, but as far as a system, I don’t agree with a lot of it, and for us it’s more about trusting subconscious or unconscious streams of creativity.

Yeah, and so a lot of the writing isn’t done in this conceptual way. A lot of the concept comes, as with all of our records, in the middle of the process. It’s great because you start off with a blank canvas, and as you go you see the image becoming more and more clear. But you catch it at different times. It might be in the mixing stage when you decide that this is what’s unifying all the stuff. But this time we caught it early, which was different for us. We just started to guide it in that direction.

What you said earlier about tapping into a sense of awareness and energies that are always there by putting ourselves on a level to receive them seems relevant to this. It’s something you see in a city often, when you run into people you know often or have good luck with subway train times. Little things. How do you put yourself in a headspace to channel all of this and receive it?

We’re both meditators, and this has nothing to do with occult or esoterica or anything, but from a practical standpoint that’s more who we are. We’re not Wiccan or Pagan…well, we’re a little Pagan. But our interest in this stuff, for us it’s more about the mystery, which is interesting from a creative standpoint. The idea of occult as gaining hidden knowledge, things you can’t really explain, but being aware of these things and being open to this mystery. So for us it’s about being present and attentive and open to things that are weird or unusual, and paying attention to them,whether it’s dreams or some spooky occurrence.

But when you talk about being open to coincidence, about getting on some sort of wavelength, for us it ties into the idea of karma, which is intent—a Buddhist concept that everything is born in the mind first. So everything you do, everything you experience, you think first—whether you’re conscious of that or not. If you put yourself in the right mind space, if you open yourself up to all kinds of experiences, part of that is intention. If you can imagine something then it can happen. And it can happen anyway, but it’s more likely to happen if you imagine it happening. You create your own reality, really.

Mary Anne Atwood said that the root of alchemical art has been buried. What advice would you give someone without the ability to go out and sojourn for a while, to connect with those energies in nature? How can they get that back in their daily lives?

[Laughs] It’s a struggle, it’s a struggle. Log off the internet, probably? Go for a walk in the woods at night? Go out at dusk. Go out during these magic hours, into nature. That’s when you start seeing flickers of things. Meditation and art can help. That’s one of the greatest things about art, it takes you to a different place and it makes you look at something a different way.

We’ve actually just been on a David Lynch movie marathon, and we’ve been appreciating these moments he has in his films where there’s these temporal shifts, where something will just get blurry or there’ll be a low sound and it’s like you’re entering another dimension. You don’t know it until later in the film, that was a turning point and the person is no longer the same character, their identity shifted or time shifted or reality shifted in some way. But art can do that.

Moon Duo embark on a tour of the West Coast on February 22. They play Rough Trade in Brooklyn on April 27. 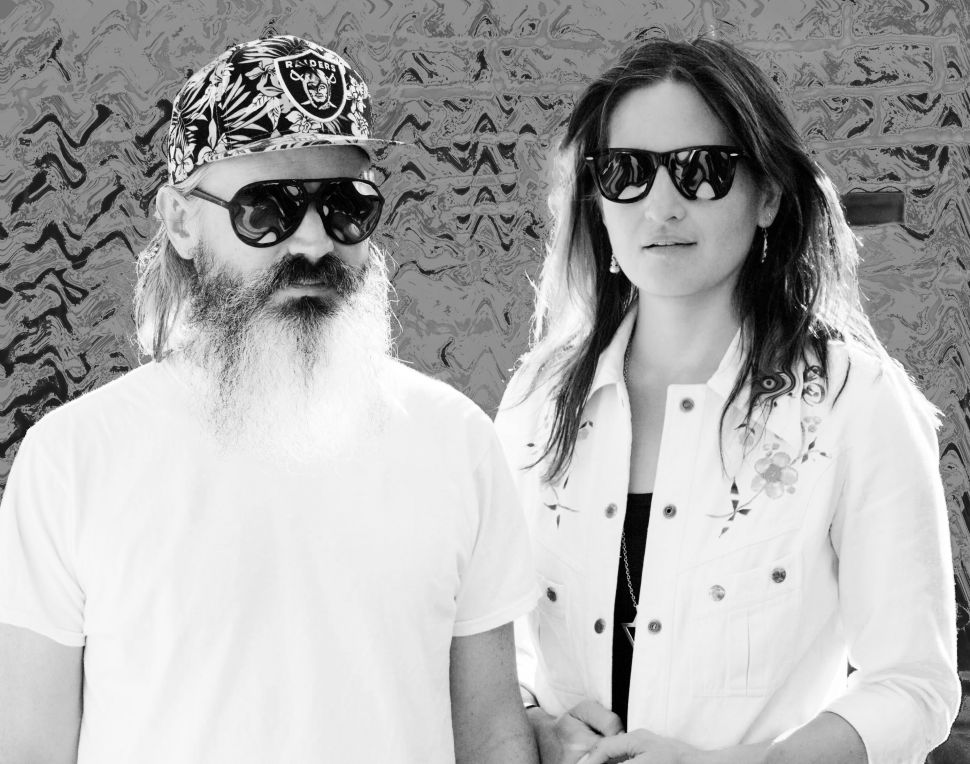