Amateur President Donald Trump recently declared the news media to be “the enemy of the American people.” Among his most frequent targets for scorn is CNN, which Trump calls “fake news.” Trump also compared the American intelligence community to Nazis.

So . . . Surprise! Somebody—somehow, someway—leaked to CNN Thursday that Trump’s chief of staff, Reince Priebus, recently tried to pressure the Federal Bureau of Investigation into publicly disputing recent leaked reports that the Trump presidential campaign had contact with Russian operatives.

Priebus even contacted FBI director James Comey, according to CNN, in a second attempt. Comey turned down Priebus, CNN reported, because the FBI investigation is continuing.

“Treasonous-type allegations,” Priebus called them last Sunday in an interview with Fox. He also referred to the Russians as “spies” while denying anything occurred.

In another scoop Thursday, CNN reported that the White House has pressured the Department of Homeland Security into supporting its contention that people from seven Muslim-majority nations are dangerous potential terrorists.

The Trumpists did this, CNN reported, to bolster their effort to inflict an executive order banning travel from those seven nations. The first try four weeks ago was put on hold as unconstitutional at two levels of the federal judiciary. Or, as Trump put it, by a “so-called judge.”

“The notion of the Trump White House seeking an intelligence report to fit its policy instead of the other way around—this is an issue in the intelligence community,” Jake Tapper of CNN reported. His name also was one of five bylines on the main FBI story on the CNN web site.

Although CNN broke these stories and refreshed them every hour, MSNBC followed up closely on the FBI story, confirming it and offering more strident commentary, starting in the early evening, when former Justice Department spokesman Matthew Miller visited Chris Hayes on All In.

“These investigations need to be sacrosanct and they need to be walled off from any kind of political pressure,” he said, urging that Attorney General Jefferson Beauregard Sessions III recuse himself from the investigation because he was part of the fall campaign.

Of the three major cable news channels, the only one to ignore the FBI story Thursday night was Fox News Channel, which is Trump’s sanctuary network. Despite actual live shows at 8 p.m. and 9 p.m., hosts Bill O’Reilly and Tucker Carlson found other things more interesting.

On The O’Reilly Factor, the nation was warned of “drug-peddling monsters” Trump wants to ban by building a wall on the border with Mexico. On Tucker Carlson Tonight, the host chatted with Connecticut Governor Dan Malloy and told him he should help Trump deport undocumented aliens.

Back on CNN, in the 11 p.m. hour, Don Lemon hosted CNN Tonight and interviewed former White House stalwart David Gergen, who told Lemon it would be “highly objectionable” if the White House “tried to muscle the FBI.”

“It is inappropriate,” Gergen said. “You just stay away from it.”

The clumsy and crude attitude of the Trump White House was obvious in another story earlier Thursday in a top item of The Lead with Tapper on CNN.

TRUMP: “We’re getting really bad dudes out of this country. And at a rate that nobody’s ever seen before. And they’re the bad ones. And it’s a military operation.”

‘Tell those two idiots that was some of the best television I’ve seen in a long time.’

Kelly didn’t seem to be on the same page.

The last comment seemed to be snarled at the news media. Tapper didn’t buy it.

“Hmmm,” he said to reporter Sara Murray, who was on remote camera outside the White House. “Maybe General Kelly should voice his frustration to someone other than the media.”

Earlier, Tapper set up the report with: “This seems to be standard operating procedure for the White House. The President says something and he’s immediately contradicted by his own senior cabinet officials.”

For much of the week, large and loud crowds of citizens voiced their anger at Republican Senators and representatives who were holding town halls in their states while Congress takes recess.

CNN and MSNBC aired many scenes of people shouting and chanting about many things, including the Republican attack on health insurance.

But on Fox News Channel, especially in prime time, it was hard to find much coverage. Take Wednesday night, for instance.

The O’Reilly Factor went on extensively about how dangerous immigrants really are. They showed scary mug shots. But nothing about the town halls.

On Hannity, Fox’s leading Trump fluffer spoke at length about how much he didn’t like former President Barack Obama and about how you really can’t trust the mainstream news media. But nothing about the town halls.

And on Carlson’s show, the host ignored the issue, although remote reporter Trace Gallagher gave a two-minute report about the town hall disruptions.

It was a masterpiece of obfuscation.

Despite showing several brief, visual scenes of protestors challenging the legislators, Fox producers could not seem to find any sound recordings that clearly conveyed the passion of the verbal voters. After all, they go to a town hall to be heard. The other networks used the audio.

Gallagher did mention that Rep. Jason Chaffetz of Utah accused “paid, out-of-state rabble-rousers” for the disruptions. Then came an amended statement by Chaffetz admitting the overwhelming majority were local people who not paid—but that some were paid, “I’m convinced.”

And Fox also displayed a full-screen quote of a Trump Twitter belch that said “The so-called angry crowds in home districts of some Republicans are actually, in numerous cases, planned out by liberal activists. Sad!” Gallagher read it out loud, to emphasize the words of The Great Leader.

During a two-hour special about “Trump, the First Month” on MSNBC Wednesday night, anchor Rachel Maddow pulled apart the lapels of her sober dark blazer and flashed the camera.

What she exposed was a busy and colorful tee shirt that said “The American Carnage Tour,” a heavy metal music show from 2010. Her torso displayed the logo for the band Slayer and what looked like the skeleton of a large, angry bird.

Maddow explained to co-anchor Brian Williams that she wore it because Trump referred to American “carnage” during his gloomy inauguration speech last month.

Williams smiled and joked to Maddow: “This is why we say you need rest.”

In fact, Maddow works harder than most cable TV hosts and rewards her bosses for it. Last week, according to Nielsen ratings, Maddow’s 9 p.m. audience of 2.5 million viewers was her second highest ever, second only to the week of October 27, 2008, which was 2.6 million.

This year, MSNBC announced, its prime time ratings are up 58 percent. But at an average of 1.6 million, MSNBC trails Fox’s average of 3.4 million, which is up 29 percent. CNN comes in third in this bracket with 1.3 million, up 14 percent.

Part of the chemistry of Morning Joe on MSNBC is the casual and chronic rudeness of co-anchor Joe Scarborough. He displayed it again Thursday in the 6 a.m. hour when he ranted to Jon Meacham against liberals who don’t let conservatives speak their opinions in colleges.

“Go to hell!” Scarborough said of anyone who disagrees with him. “You don’t know what you’re talking about!”

“I’m talkin’ to him!” Scarborough said, pointing at Meacham.

Scarborough then raised his voice even more and foamed at the mouth about how elite institutions don’t appreciate right-wingers like Joe Scarborough.

After a couple more minutes of conversation with Meacham, Deutsch was allowed to speak.

“First of all,” he said to Scarborough, “don’t speak out rudely like that. I don’t deserve that. I’m serious. Don’t screw with me like that. I was just trying to make a point . . . You don’t have to lash at me.”

Scarborough didn’t appreciate this and fired back that Deutsch would probably say off the air that they made good television. Deutsch wasn’t having any of it and co-anchor Mike Brzezinski began to gently tap Scarborough on the arm and back, urging him to be quiet.

“You don’t have to come on,” Scarborough said.

As the show continued, Scarborough tried to soften the mood by teasing Deutsch about how Deutsch brags that he gets dates with liberal women in the Hamptons whenever he challenges Scarborough.

After a commercial break, co-anchor Willie Geist read on his phone a text from a friend.

“Tell those two idiots,” it said, “that was some of the best television I’ve seen in a long time.” 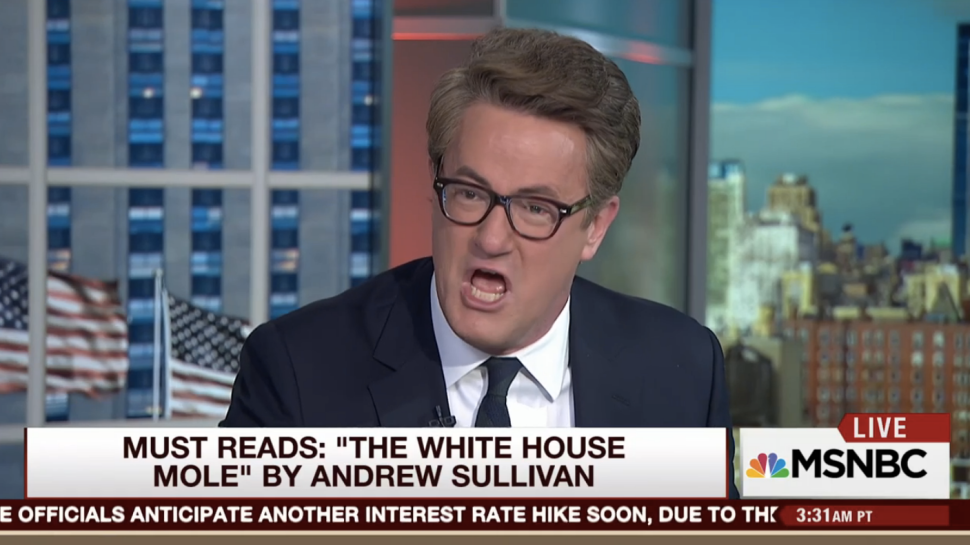