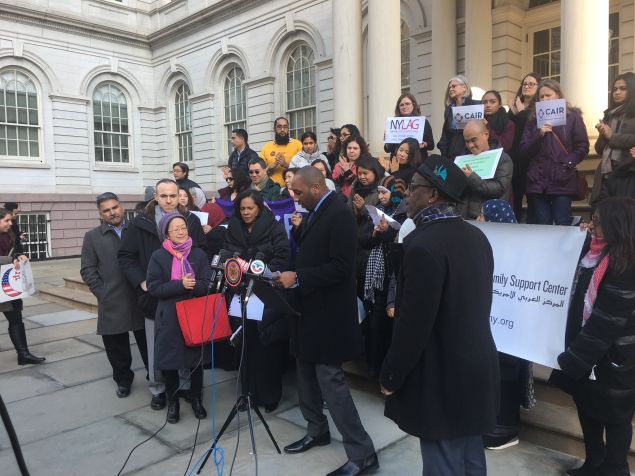 In the first weeks of his presidency, Trump has signed off on fiats to sever funding to so-called “sanctuary cities,” to instate a 120 hiatus on the country’s refugee resettlement program and to bar travelers from seven predominantly Islamic nations from entering the United States. San Francisco has already challenged the first order in court, and Mayor Bill de Blasio has vowed to follow suit, while federal judges have forbade the administration from applying the latter action to people with paperwork approved under President Barack Obama.

Tensions remain high, however, prompting today’s rally outside City Hall—where Queens Councilwoman Julissa Ferreras-Copeland, chairwoman of the Council’s Committee on Finance, asserted that immigrant families have contributed and continue to contribute to the city and country through their taxes.

“Now, what we are saying from the City Council’s perspective is we’re gonna take those taxes and invest them in programs that defend immigrants,” Ferreras-Copeland said. “We’re gonna take our taxes, regardless of what you say—that you’re gonna hold back funding to sanctuary cities—New York City says we will stand up with our immigrant families and we will take our tax dollars and invest them in all of these organizations and with all of our people because we must continue to protect our families.”

She said that her own father came to the United States in the 1970s as a calculus professor and his first job was washing dishes. He then pumped gas and then put himself through college a second time because his degree was not recognized in the United States.

“I am standing here today as the finance chair, and I take every one of those struggles with me in every fight that we have in this city: immigrants, the Muslim community, women, [the] LGBT community, every person that this president has attacked, you are not alone, we stand together,” Ferreras-Copeland said. “Enough is enough.”

Queens Councilman I. Daneek Miller, the Council’s only Muslim member, said that was he struck by the support that New Yorkers of all backgrounds have shown for the Muslim community. He also said that the Council and the city will always “espouse positive rhetoric” to bring people together as Trump engages in “incendiary rhetoric.”

“I had the opportunity to speak last week at one of the rallies and prior to some of the executive orders that came out, and we said that we at this Council and we of this progressive coalition that have gathered here on many occasions, have set the template,” Miller continued. “We have a recipe for success of unification, bringing people together and fighting this oppression and tyranny. We do it well and it’s a message that has spread throughout the city, and we see that.”

Manhattan Councilwoman Margaret Chin, for her part, said the Muslim travel ban hits close to home for her. She said that her father never met his father because of the Chinese Exclusion Act of 1882 and that her mother did not get to see her father until Chin and her family moved to the United States.

“Even though we helped build the railroad that caused prosperity for this country and we helped build up this country, my mother didn’t get to see her father until we came here in 1963 under President Kennedy’s Refugee Act,” Chin said. “We were refugees and we were able to come. We gotta make sure that the doors of this country continue to open and welcome everyone…this is who we are.”

Queens Councilman Donovan Richards, co-chairman of the Progressive Caucus, said that the policies that the Council has been working over the past four years have always centered on ensuring equality and justice for the city’s communities.

He said that the Council now has to look at other policies, which he said it won’t release today but that they are taking a “very careful look at”—to ensure that they can move the bills in a way that “can be helpful during this time.”

“Obviously, we’re going into our budget season—as the chair of finance said—where we need to decide not only the policy issues that we see coming up but also we need to put our money where our mouth is,” Richards said. “So when it comes to legal issues, we talk about housing issues, we talk about the environment, there may be ways to tie in budgetary items that will be useful even as the president threatens sanctuary cities.”

Manhattan Councilman Dan Garodnick said that Trump has taken “direct aim” at the city by challenging its position as a sanctuary city and blasted him for elevating his chief strategist and senior counselor Stephen Bannon to the National Security Council.

But he noted the Brooklyn federal judge’s injunction and commended the work of the American Civil Liberties Union, the International Refugee Assistance Project, Make the Road New York, the New York Immigration Coalition and other groups. And he condemned the Republicans in Congress for not fighting Trump’s executive orders.

“You Republicans in Congress, where are you?” Garodnick said. “Paul Ryan and the rest of the GOP establishment, history is going to remember your silence here. You can’t hide under a rock and pretend this is not happening. You can’t claim to stand up for family values if you do nothing to stop policies that will tear apart families.”

This story was updated to clarify that the comments about Republicans in Congress, the Brooklyn federal judge’s injunction and the National Security Council were made by Councilman Dan Garodnick, not Councilman Brad Lander. 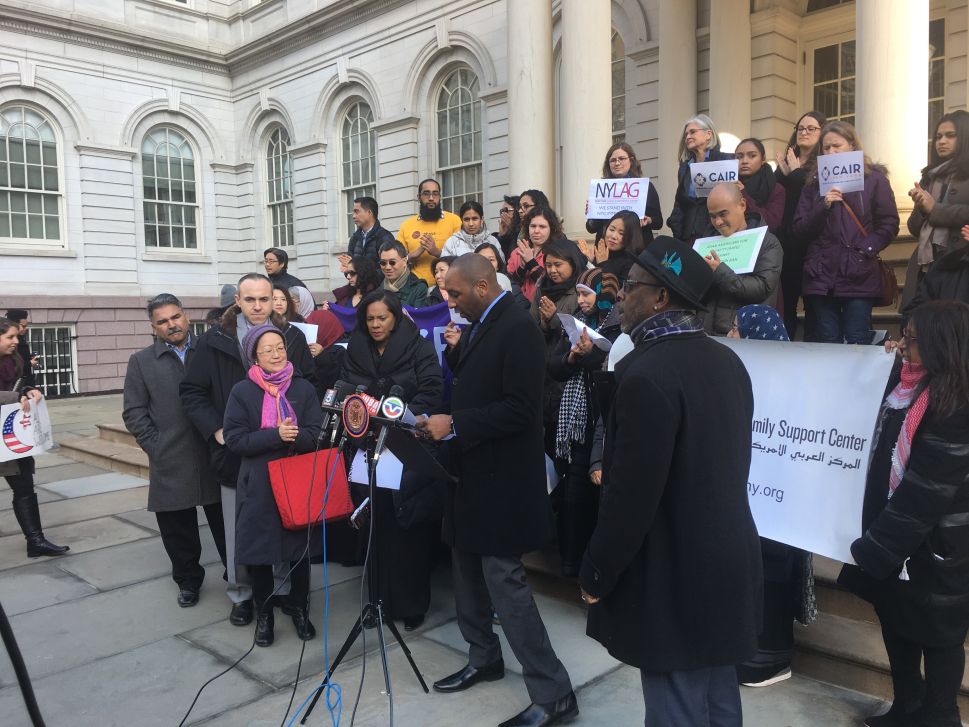