#RobertJames makes a political statement at his #NYMD presentation – showcasing a collection fabricated with resistant materials so you can #protectyourself in style.

Over the past year, the fashion industry has bent increasingly political, alongside with most other industries. For their show in September, R13 debuted a ‘FUCK TRUMP’ print on a mini dress, while Supreme endorsed Hillary Clinton this past November in an unprecedented move for the New York-based streetwear brand. Now, in the wake of the election, some designers aren’t backing down from speaking out.

Monday afternoon, as a part of a group of fashion presentations during New York Fashion Week: Men’s, Robert James turned his show into a protest. With models holding picket signs saying “#RESIST,” “#RefugeesWelcome,” and “Planned Parenthood Saves Lives,” the performance was in direct response to this weekend’s executive order regarding Trump’s so-called Muslim ban. Naturally, the clothing that accompanied the signs were military and refugee-inspired. Completely washed in olive, brown and black, the layered looks of leather jackets, cargo pants, combat boots, skullies and scarves were familiar to the visual language of insurgents. It had the effect of a cleaner, more streamlined take on Raf Simons’ “Woe Onto Those Who Spit On The Fear Generation…The Wind Will Blow It Back” collection from 2002.

Not far away, at the Private Policy presentation words like “Terrorist,” “Rude,” “Refugee” and “Drug Dealer” were written on the faces of models. That range was inspired by globalization, stating in the show notes that our “giant global system can easily be affected by a single action taken by another country.” The collection’s description went on in a bold manner: “the trouble of one area becomes the trouble of all.”

Days later, Willy Chavarria made his men’s week debut on a set of models, who were plucked from the streets. His casting announcement posts on Instagram made it clear that the show would be a comment on the political climate. One post read “Mexican, sexy wet back, fearless immigrant,” while another asked for applications from models with an “intolerance for hate.” The final casting was eclectic, offering a realistic depiction of the myriad of faces one might see walking down a New York street. The casting itself was headed up by Brent Chua but the thematics were no doubt originated from the designer himself.

A sweatshirt from the line read “hate is fed,” with another phrase later proclaiming “it is a luxury.” The former Ralph Lauren designer sequestered the models in a cage at the beginning of the presentation, in a move that could metaphorically symbolize oppression at large. It was also a nod to the fallout from the Muslim ban, which resulted in several protests, including one by bodegas in New York this week.

During an interview at the W Hotel, Mexican-American designer Ricardo Seco maintained that his presentation wasn’t political. However, the show’s message about migration and solidarity seemed to indicate otherwise. “Juntos/Together explores the migrant’s plural worlds that threaten to revoke his or her importance in the development of a society in the cultural wealth of a country,” the show notes read. Specifically, it highlighted “political tensions between the United States and Mexico” as inspiration for the collection, which featured mostly sportswear (a category invented by American designers) overlaid with colors of the Mexican flag and symbols from Mexican culture. With that sort of amalgamation, the range seemed more political than not. But why would he deny that?

There is a risk in going political, particularly for fashion designers. When Pyer Moss founder Kerby Jean-Raymond screened an explosive film about assault on black bodies by America’s police, his line was dropped by a store. When Tom Ford recently spoke out, saying he had and would continue to decline dressing Melania Trump, the Wynn Las Vegas immediately removed all of the designer’s pieces from their website and store. Nordstrom has pulled Ivanka Trump’s brand from its shelves, but they are claiming that this move is purely sales-related. And when Ralph Lauren dressed Melania for the inauguration, some called for a boycott of his label.

Those reactions represent the duality of a fashion designer’s position; though designers themselves consider what they do an artistic endeavor, reflecting their views of the world in their creations and presentations, what they do is a commercialized business. It’s likely the reason we didn’t see any outright statements from sizable designers like Billy Reid, John Elliott, Rochambeau, who find themselves beholden to retailers and various other big players in the industry. Political commentary, though important can make or break a designer in the age of social media, especially depending on public temperament. But as social media begins to call out those who have abstained from taking a political stand, seen most recently with Taylor Swift, staying silent could soon become a boycott-able offense. 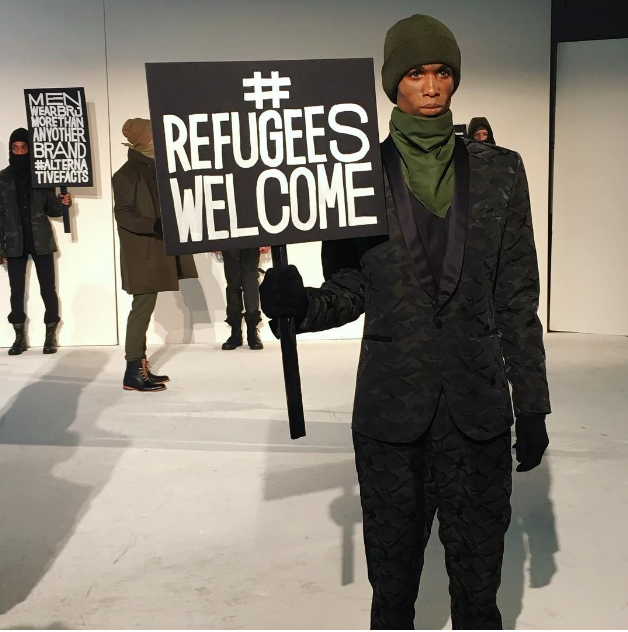