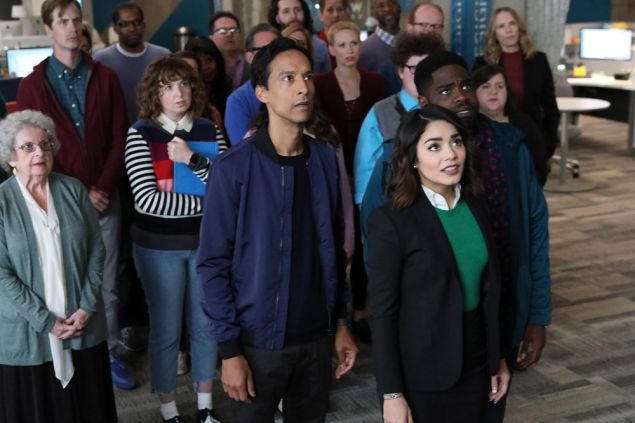 Everyone knows what Superheroes do – they save the world! But, unfortunately, they often make a mess while doing it.

The new series Powerless follows the staff of an insurance company that specializes in creating products for defenseless bystanders to use to protect themselves from the peripheral damage caused by Superheroes and Supervillains. In this new world, Emily Locke (Vanessa Hudgens) begins her new job at Wayne Security. There, she quickly learns her expectations far exceed those of her new boss and her office mates. So it will be up to her to show the team that you don’t need superpowers to be a hero.

At a television critics event, Executive Producer Patrick Schumacker explained the evolution of the series, the first comedy set in the DC Comics world, saying, “[We] brainstormed a way that activates the DC universe and brings that into the office. We landed on security products because we still wanted to do the idea that they are working on stuff that makes everybody a little bit safer in a world where demigods are flying around in the sky, wrecking buildings, causing falling rubble and that sort of thing. We thought it was more interesting to sort of go on the preventive side of things.”

Expanding on the connection to Batman himself, Schumacker said, “There’s a lot of recognition in the Wayne name. It is ultimately Bruce Wayne’s company. It’s a subsidiary of Wayne Industries, but this takes place in Charm City, [which is] totally made‑up city for this version of the show.”

Fellow Executive Producer Justin Halpern added, “We sort of saw the Wayne [family] kind of like any big business, like the Rockefellers. You have people who run the company, and then you have a bunch of hangers‑on. It’s a big field of nepotism. It’s like you’ve got Trump, and then you’ve got all of his idiot sons. It’s like that at Wayne.”

Thus was born the character of Van Wayne (Alan Tudyk) who’s the Caped Crusader’s cousin and the leader of Wayne Security.

“Van Wayne, is constantly trying to achieve that dangling carrot of getting a job in the Gotham office, [which is] the mothership,” said Halpern.

Hudgens says that she signed on to portray Emily because, “I love workspace comedies. The Office is my all‑time‑favorite show. Then adding DC Comics as the backdrop for the show, I just knew that it would be something completely original.”

As Hudgens harkens back to her favorite superhero she admitted, “I love Catwoman. Michelle Pfeiffer as Catwoman is my all‑time crush. I dressed up as Catwoman every day when I was like four-years-old. That’s the nerdy part of me.”

It was the humor of the series that drew Tudyk to his role as Van Wayne. “When I think something is special and is funny I’m very attracted to it, and this is funny.”

Talking about working with TBTP within the DC universe to get to the humor, Halpern said, “We have a joke in the pilot where we kind of poke fun at the Batman vs. Superman films, and, you know, it’s always like going up to them and being, like, “Hey, can we shit on this?” And, usually, they have a good sense of humor about it.”

Getting serious about the topic for just a moment, Halpern added, “I think we are very protective of their characters and for a good reason. A lot of people invest a lot in these characters. We ask for as much as we can get, and then we kind of see where we can find a happy medium.”

There are some things that are off-limits, but not for the reasons that viewers might assume. “When [we] ask for something [or use of a character] that’s [on another network] there’s a lot of red tape,” explained Halpern. “So those are a lot of the challenges we have. That’s when it gets really tough and it can be a little frustrating, but I think we’ve been pretty happy with what we’ve been able to do [so far].”

Schumacker added, “I’ve read some comments online that people assume, “Oh, they are just leaning really hard into the Batman of it all because it’s Wayne Security.” It’s not true. The idea is that we are going to pull from the entire canon of the comics. You’re going to see characters that you are familiar with but you’re not going to see the members of the Justice League. They are not going to make appearances, [but] they do exist in this world. We reference them all the time.”

The overall tone of the series, said Halpern, is developing with each episode. “For us the big thing was trying to keep the workplace stuff grounded, because you’re already in a world that’s very heightened. It felt like you didn’t need to also go super broad within the workplace. So we were trying to strike that balance. I think you’ll find over the course of a few episodes we start to fine-tune where we can ‑‑ which characters we can go a little bigger with and which ones we want to keep a little more grounded.”

In terms of the superhero interaction, Halpern explained, “For that we always wanted to play it in terms of how it affects the normal person’s day, and so we try not to ever play it for a joke in and of itself.”

Hudgens says that she’s completely content and happy to have stepped into this world. “It’s just a really amazing environment to come to every day. I just can’t wait to share the show with my friends and my family. I feel like even if I wasn’t on the show, I would still watch it, because it’s really funny.” 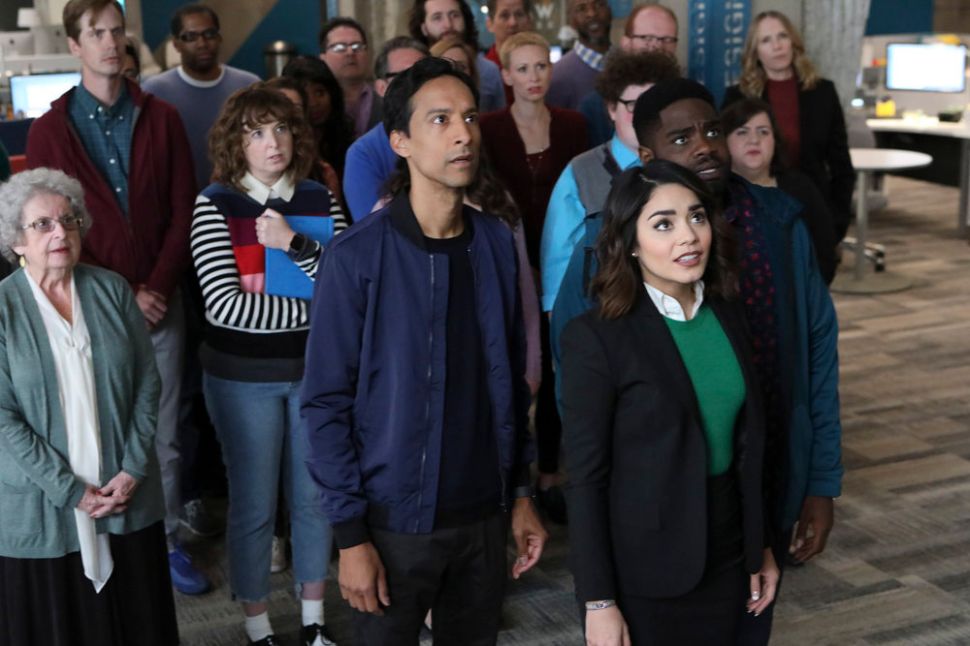