JERSEY CITY, N.J. – Jersey City Mayor Steve Fulop sat front-and-center in his municipality’s city council chamber as he signed an executive order re-affirming the city’s sanctuary city status on Friday. Fulop’s move comes one week after an executive order signed by President Donald Trump declared that cities that do not prosecute illegal immigrants under federal immigration law must begin to do so or risk losing federal funds.

Fulop and city council members outlined a detailed policy for the Jersey City Police Department and other city departments and agencies who work with the immigrant community. While the executive order does not change how the city works with members of these communities, according to Fulop it “re-affirms” a commitment to preventing Jersey City resources from being used for Trump’s executive order.

“We are proud to be a city of immigrants. We won’t be bullied or pushed,” Fulop said. According to Fulop, Newark Mayor Ras Baraka has reached out about taking similar action in Newark, another sanctuary city.

While Jersey City took action in the hopes of setting up a model for other New Jersey municipalities, Fulop is not the only N.J. mayor who took action on Friday. In the small Passaic County town of Prospect Park, Mayor Mohamed Khairullah also issued an executive order on Friday “upholding the municipality’s policy of anti-discrimination and continued commitment to provide equal municipal services to all residents.” Khairullah’s Friday executive order is the first in Prospect Park’s history.

Khairullah is a Syrian-born Muslim-American. Because of that, the mayor said he is dedicated to pushing back against any federal executive orders that negatively impact residents or demonize refugees.

“As an immigrant from a country ruled by a dictator, it is important to me that our Commander in Chief upholds the U.S. Constitution as the law of the land. The United States is a land of immigrants and refugees, including our founding fathers. It’s those immigrants and refugees who historically built our country to the respected nation it is today,” Khairullah said in a statement leading up to the signing of his executive order.

In Prospect Park, Khairullah chose 4:43 p.m. for his executive order, marking exactly one week from the signing of Trump’s controversial executive orders.

In the two weeks since Trump was sworn in as the 45th president of the United States, lawmakers from around the Garden State have levied criticism on him for the use of executive orders and other actions taken by his administration. The likes us U.S. Senators Cory Booker and Bob Menendez, New Jersey Senate President Steve Sweeney, Senate Majorty Leader Loretta Weinberg, and members of New Jersey’s congressional delegation have all spoken out against Trump’s recent immigration orders. Advocate groups including the ACLU have also been fighting back on Trump’s executive orders.

Also on Friday, activists from New Jersey Working Families went to the offices of Booker and Menendez to deliver petitions asking the senators to filibuster Trump’s nomination of Judge Neil Grouch for the U.S. Supreme Court. 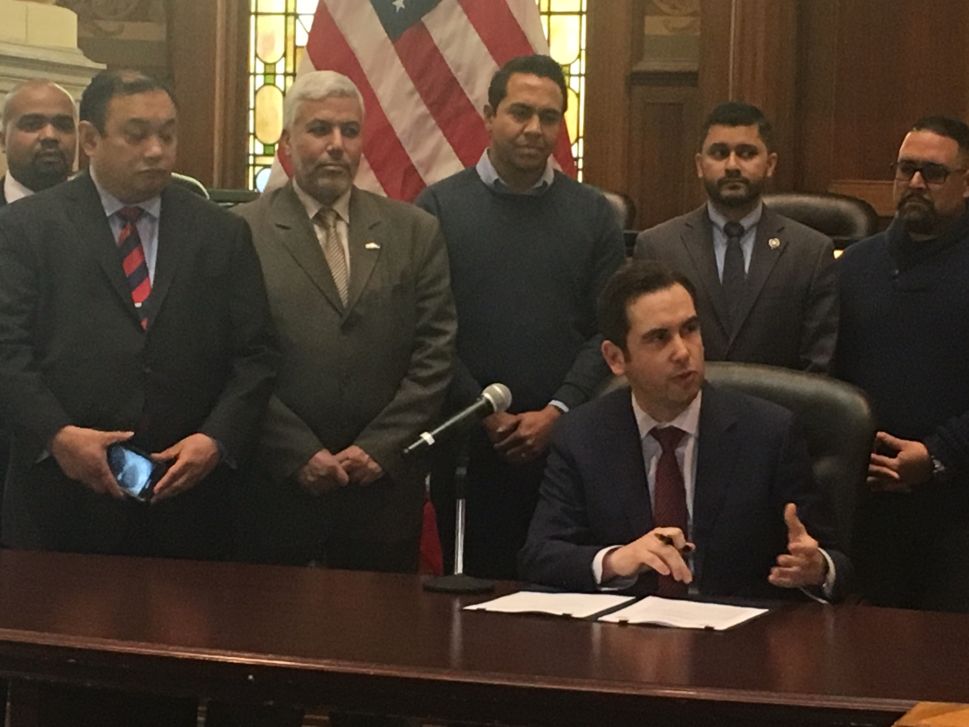