New York State Attorney General Eric Schneiderman expressed confidence that the legislation he introduced today to overhaul the state’s voting systems and procedures will pass both houses of the State Legislature—arguing that the purge of more than 100,000 Democratic voters in Brooklyn ahead of last year’s April primary sparked a “year of change.”

The New York Votes Act includes automatic registration of eligible voters, same-day registration for new voters and online personal voter registration and absentee ballot applications. It also creates a system of permanent voter registration and allows registered voters to change their party enrollment closer to primary day. Schneiderman said that he has been in touch with Gov. Andrew Cuomo’s office about the package of bills, and said Staten Island Assemblyman Michael Cusich—who is the chairman of the Election Law Committee—is the Assembly sponsor.

The prosecutor said he expects to have a Senate sponsor “very, very soon,” and is looking forward to a “vigorous” campaign to get the legislation passed.

“I believe we will,” Schneiderman said in front of the steps of Federal Hall. “We’ve been in touch with people in the Senate, in the Assembly, in the executive branch and I do think this is the year for change.”

Asked whether his legislation stood a chance in the GOP-run State Senate, Schneiderman admitted that he does not yet have a headcount of supporters, but stressed that he only introduced the legislation today. He asserted the proposals, broadly popular among Democrats, could also benefit Republican politicians.

“There are a lot of the reforms here that would help people who represent rural upstate districts where it’s very hard on the current system to get to where you have to get to on Election [Day]—this narrow window that we give people to vote,” Schneiderman continued. “So we think that we can get support on both sides of the aisle, in both houses.”

Schneiderman said a number of the provisions in the New York Votes Act stem directly from the findings of his December 2016 report on the problems votes faced during last year’s presidential primary and general election. The inquiry, undertaken in response to record voter complaints during the April primary election, concluded that voters encountered barriers to access due to New York’s restrictive voting laws, rules and procedures as well as by the practices and administrative errors of state agencies and the Boards of Election.

The board’s Brooklyn office suspended its top Republican and Democratic clerks after discovering tens of thousands of people, many in predominantly Hispanic Sunset Park, got expunged from voter books.

The attorney general called last year’s election a “catastrophe” that outraged voters, saying that as a result, his office is now suing the New York City Board of Elections.

“How shall I say this politely—this limits the potential for the Board of Elections to enact policies that are inconsistent or to fail to follow through on policies that are necessary that might screw up voting for New Yorkers,” Schneiderman said.

The legislation also adopts a system of early voting, provides for “no excuse” absentee voting, requires poll sites statewide to open at 6 am and close at 9 pm during all primary elections. It also consolidates federal, state and local primaries so that they all take place on one day in late June—rather than having presidential primaries in April, congressional primaries in June and state primaries in September—and enacts disaster preparedness protections. And the bill increases language access and protects voters from improper challenges and restores voting rights to people on parole or post-release supervision following a felony conviction.

Election commissioners and BOE employees would be required to complete mandatory training within six months of appointment and continuing education to be established by the New York State Board of Elections. It would also require the state BOE to establish and host an Education and Training Institute to form a curriculum for certified poll worker training and train-the-trainer programs.

The law would obligate the state to reimburse localities for any additional costs in connection with the rollout of early voting, enhanced language access and expanded primary election voting hours as mandated by the legislation.

The attorney general also disputed President Donald Trump’s repeated claims of mass voter fraud, saying that none of the verified complaints that came into his office hotline concerned impersonation of a registered voter.

“We have to get out there with the narrative that it is time to open up our democracy, make sure everyone can vote and I honestly feel like the public is more ready for this and frankly the members of the legislature are more ready for this,” Schneiderman said. “This does have implications. It is gonna save us money in the long run, it requires some investment in the short run so just as an idea, maybe we should try to get it in the budget this year.”

Both Schneiderman and Mayor Bill de Blasio have called for reforms to New York City’s BOE, which is largely controlled by the Democratic and Republican Party chairs from each borough. In the immediate aftermath of the April primary, de Blasio offered the BOE $20 million in extra city funding if it were to undertake substantial reforms, but the board has not yet accepted the offer. 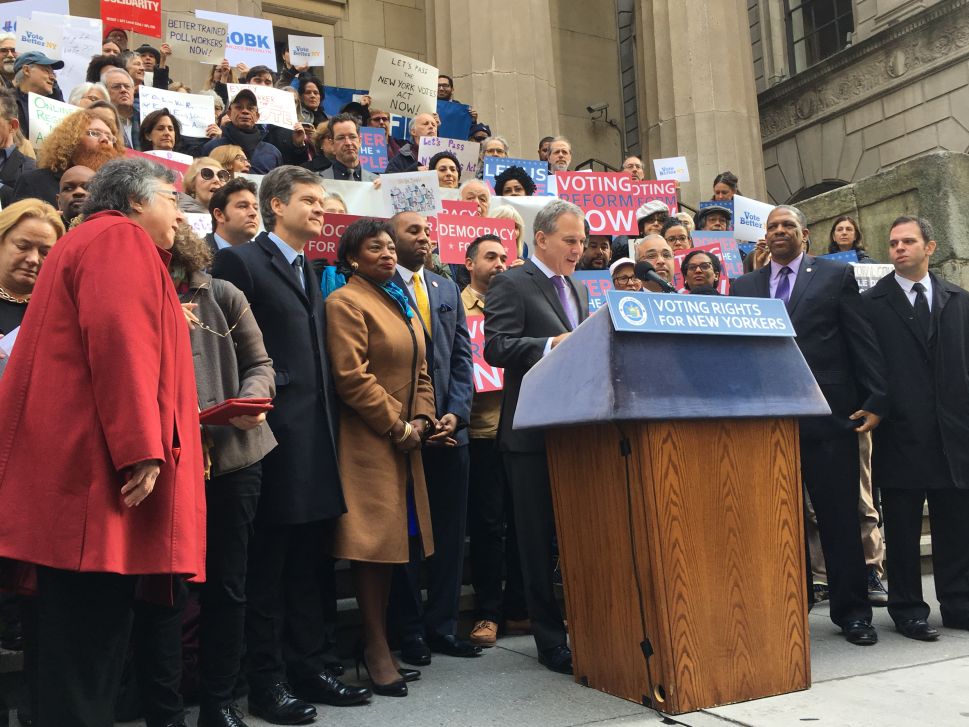