Mark-Viverito and Mayor Bill de Blasio backed the nickel surcharge, which was supposed to go into effect today, as a way to get New Yorkers to start carrying reusable totes instead of disposable pouches. But the Democratic Assembly and Republican State Senate passed bills earlier this year to block the measure, arguing it was too costly to consumers and unfairly rewarded store owners—and Cuomo ultimately agreed.

“Right now, we are looking at our legal options,” Mark-Viverito said during the monthly pre-stated meeting. “That’s the right we have and we’re gonna look at it, whether or not to sue. Again, we said we have concerns. One of the facts, the legislation just targeted New York City, other cities in the state have actually implemented a fee.”

The Council passed the measure nearly a year ago with opposition from some Council members who felt it would burden low-income New Yorkers, and it was initially supposed to start in October. But Mark-Viverito succumbed to pressure from Assembly Speaker Heastie, and agreed to postpone it until this month.

Cuomo said in a statement last night he understood the concerns that led to the fee proposal but called it “deeply flawed” given that it enabled merchants to pocket the five cents they collected on each bag. He announced that he would impanel a task force—which would also include representatives from the State Senate, Assembly and local governments—to study the issue and propose a new solution by year’s end.

Mark-Viverito insisted that she is a “very collaborative legislator” and said she has worked “very well” with Heastie. She also said that she has “worked well” with Cuomo and continue to be willing to work proactively.

But she felt that his decision to veto the bill was “something that we pushed back against” and said that it was “irresponsible” for the governor to claim the Council’s passage of the measure was “flawed.” Mark-Viverito noted that she and her colleages considered the measure for two-and-a-half years, in a process that was “deliberate, thoughtful, thorough.”

“We believe very strongly that the governor’s responsibility is to uphold and to support and to defend the rights of localities,” Mark-Viverito continued. “This sets a very bad precedent and so that’s what’s we’re pushing against. I don’t personalize things, you know, I try to speak to the issues, but if you are gonna try to defame my colleagues and our process, then I’m gonna push back hard.”

She asserted that even Council members who were against the bill were not pleased with the way in which the governor handled the situation.

“Even those colleagues that may have been in opposition to the bag bill have been offended by the fact that the state has tried to overturn a democratic process and that is very much a bad precedent that should not be supported,” Mark-Viverito added. “And as the governor, I would hope that he would defend us as a legislative body as he should every other legislative body in the state.”

Bronx Assemblyman Luis Sepulveda and State Senator Marisol Alcantara offered another alternative: an instant tax rebate of three cents for each reusable bag a customer at a retail store provides to replace a plastic carryout bag. But Mark-Viverito did not appear to be enthusiastic about that proposal.

“We found that that does not work,” she said. “What we tried to do is to motivate and incentivize people to not use plastic bags, right.”

The governor reiterated at an unrelated press conference this afternoon that he shared the Council’s concerns about plastic bag waste. But he noted the city introduced the surcharge as a fee payable to merchants rather than as a tax that went into public coffers because it would have required Albany’s approval.

This, he suggested, was a sign that the city acted outside its jurisdiction in passing the statute, and had stepped into what was “clearly the state’s domain.”

However, the governor acknowledged minutes earlier in the press conference that plastic bag waste is “a national problem, obviously”—which by his own logic would suggest that Albany should defer to Washington on the matter.

He scoffed at the idea that the city might have legal standing to challenge his decision.

“Cities are a creature of state law. So if a city says, ‘well, I don’t want to be subject to a state law,’ well, you know, you can secede, Civil War, things like that,” the governor said, chuckling to himself.

Will Bredderman contributed reporting to this story. 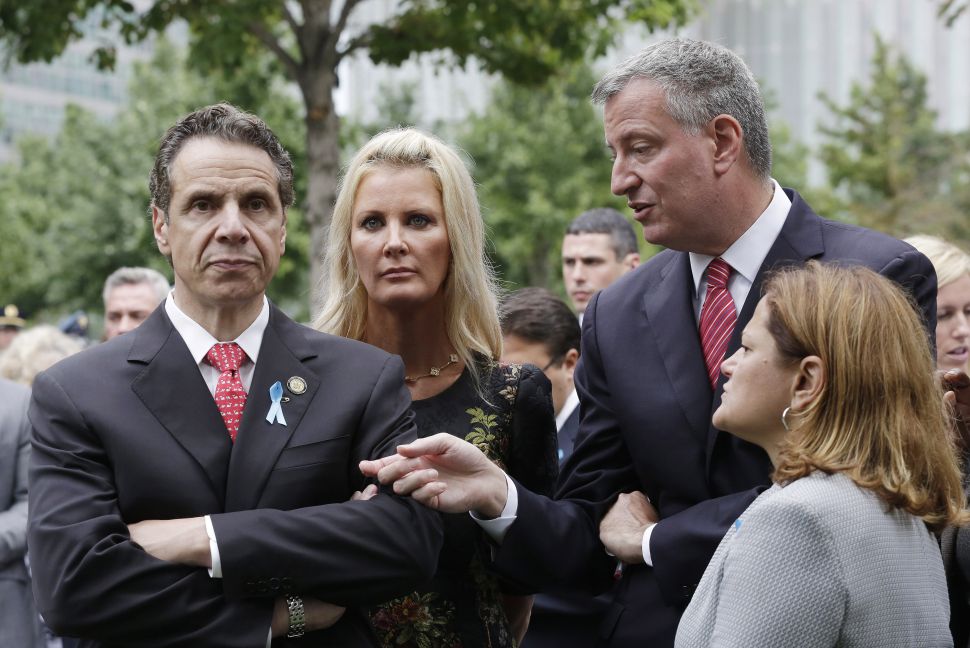