On February 2, the Morton County Sheriff’s Department posted a video depicting 74 protectors being arrested after a camp was raided. However, the video failed to corroborate the Department’s claims that the protectors were “rogue protesters,” resisting arrest and “putting themselves in a precarious situation.” Jordan Chariton with The Young Turks was on the scene filming the arrests, but the police forced all journalists to leave the vicinity before the arrests were formally made. However, the Morton County Sheriff’s Department had no problem recording and releasing their own video showing their side of the events.

Throughout the protests against the Dakota Access Pipeline, the department has run several propaganda campaigns making outlandish claims, including mocking Native Americans in a Thanksgiving Day post that was later deleted, claiming that protectors were going to arm veterans to “trigger their PTSD,” and one Sheriff alleged that all “eco-persons” are terrorists. Given the ineptitude of the Morton County Sheriff’s Department to provide an objective, fair, and balanced interpretation of laws and proper use of force, it’s not surprising that their militaristic presence has resulted in serious injuries of protectors. These injuries garnered significant media coverage in late November and early December, leading up to the Army Corps of Engineers calling for an environmental impact assessment to be conducted.

The North Dakota House of Representatives recently approved four measures aimed against the protectors at Standing Rock, all of which were proposed by State Representatives that are funded by the oil industry. The Bismark Tribune reported, “The Republican-led chamber on Monday approved a measure that makes it a crime for adults to wear masks in most cases. The House also approved bills that increase penalties for rioting, trespassing, and causing damage to personal property.”

protectors have remained in the camps to ensure that the Dakota Access Pipeline doesn’t continue construction along its proposed route and that President Trump doesn’t try to overrule the Army Corps of Engineers’ decision made on December 4, 2016 to explore alternate routes. The protectors aim to protect the Standing Rock Sioux’s supply and to make sure that the treaties between the United States Government and the Standing Rock Sioux are honored.

The Lakota Law Project posted a video and phone interview with Chase Iron Eyes, who is one of the 74 protectors arrested on February 2, the day after the new camp, Last Child Camp, was established on contested treaty land. “This is a basic human rights struggle for clean drinking and its framed as a Native nations struggle, but it’s bigger than that,” he said. “It’s also about our constitutional rights, our civil rights, our human rights, and whether we can shift to a renewable economy, and now with Trump at the head of the sip, tyranny is being rained down on all demographics of American society, who have struggled, who have sacrificed blood sweat tears life and liberty to gain those rights. Those rights are being threatened right now by a Trump administration and a Republican controlled Congress.” 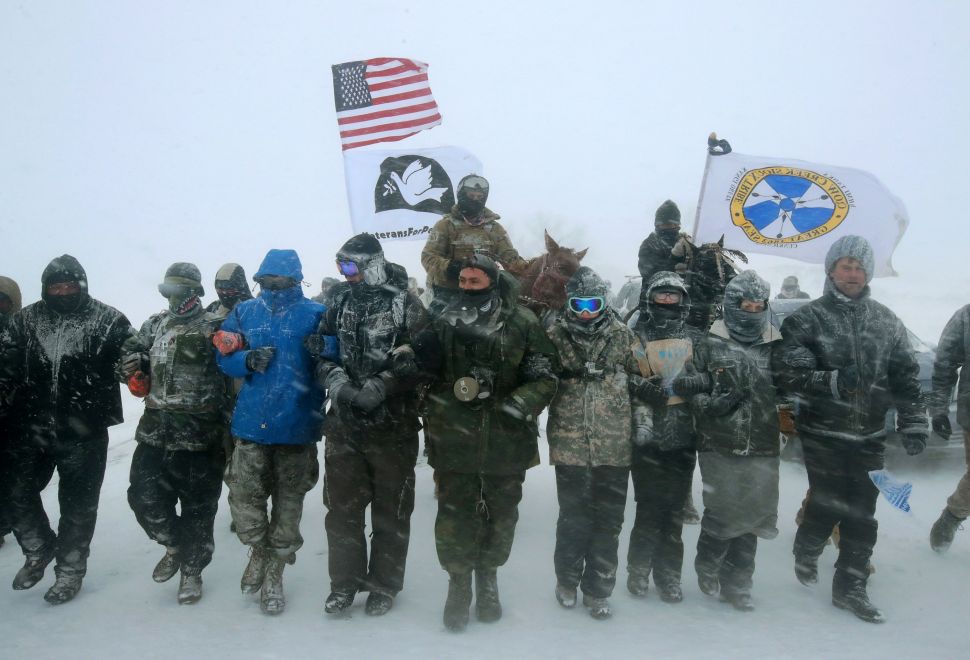