Cooper: Thank you very much for being here. We’re going to begin with a question from one of the members in our town hall. President Underwood, you won the coin toss, so you’ll go first. Our first question comes from Tom Hammerschmidt.

Question: Thank you. President Underwood, what do you feel is the most difficult issue facing Americans today and how do you plan to combat that issue?

Frank Underwood: Thank you, Tom. That’s a great question and I’m glad you asked it.

(Aside): Actually, it’s a terrible question. What kind of unoriginal, unthinking, underdeveloped sub-species starts with such a generic inquiry? He might as well have asked what my favorite color is and can he play with me at recess? We’ve become a nation of simpletons…But I can use that to my advantage.

I believe the most pressing issue facing Americans today is a stagnant economy. Unemployment in the U.S. currently stands at 4.8 percent. More than 7.5 million people are out of work in this country.

Politicians are supposed to help the people, but we’ve really just been helping ourselves all this time. We’re so concerned with getting reelected that we’ve forgotten why we’re here in the first place. The truth is, the American Dream has failed you. Hard work and desire just isn’t enough anymore.

Entitlements have crippled our economy. Social security, Medicare and Medicaid are sucking the lifeblood out of this country. Well, let me be clear right here and now in telling every American: you are entitled to nothing.

My plan, America Works, will create jobs for 10 million Americans in the first year. It will be funded by trimming the fat of unchecked government spending and doing away with federal entitlements. No handouts, just jobs.

Jed Bartlet: (Laughs) Mr. Underwood, I have a Nobel Prize in Economics and I can assure you and the American people that your plan will not work.

Underwood: And I can assure the American people that you will mention your Nobel Prize at every possible opportunity.

Underwood: And didn’t you have to split that Nobel Prize with another economist?

Bartlet: We can trade elementary school insults all night long, or we can debate the issues.

The facts are the facts. On its most basic level, economics is a relationship between supply and demand. Mass unemployment is an issue of demand. Sure, the people who receive jobs through America Works will spend more, but the hundreds of millions of Americans that are losing their SSMM benefits will be spending less. Healthy circulation will evaporate.

America has always helped its own and to withdraw that helping hand is to deny one of the core principles of being American. E plurbus unum – out of many, one.

Underwood: My opponent loves to quote Latin proverbs and speak in high-minded economic lingo. But what do you expect? He’s an academic who has never had to get his hands dirty.

I, on the other hand, grew up on a struggling peach farm. When other kids were riding bicycles, I was helping my father in the fields. I’ll never forget what he told me one hot summer day. “Son, nothing in life worth having will ever be given to you.” He was a simple man, but he was good man who wanted to teach his son about the world.

(Aside): Actually, my father was a drunken bastard. If he ever had a good idea in his life it surely died of loneliness. But voters are suckers for a good Mom and Pop story, so keep that between us (winks).

Cooper: We’ll now move on to our second question, which comes from Danny Concannon.

Question: President Bartlet, you hid your multiple sclerosis diagnosis from the American people. Should they really continue to trust you to lead this country?

Bartlet: It is true that I was less than forthcoming about my diagnosis and it’s something I regret every day. I made a mistake. I let the American people down and I apologize for that.

But my diagnosis has not impeded this administration’s progress. In my time as president, the first Hispanic Supreme Court justice and first female Chief Justice have been appointed to the bench. We’ve negotiated a landmark peace settlement between Israel and Palestine.

Bartlet: And we’ve orchestrated a revolutionary Social Security reform plan that will provide economic relief for hundreds of millions of Americans. My disease has in no way, shape or form prevented this country from prosperity and advancement.

Underwood: And yet you still decided to keep it to yourself, Jed. What kind of general lies to his troops?

Bartlet: And what kind of President uses fear and intimidation to govern?

Bartlet: (Under his breath) Zoe Barnes’ killer says what?

Cooper: Gentlemen, gentlemen! We’re getting off topic. We must proceed to our last question of the night, which comes from Twitter and is directed at both of you.

@DefinitelyNotAlGore asks: If re-elected, how will you address global warming and the growing environmental crisis that scientists have warned about since the late 19th Century?

The tweet also includes an emoji of an eggplant and a peach…I’m not sure what that means, but the question still stands.

Underwood: (Pauses) …If re-elected, I will do absolutely nothing about global warming and the environment.

Bartlet: I will also do literally nothing.

Cooper: I’m glad we could end on an amicable and mutually agreeable note. Thank you both for being here tonight and thank you to all of our town hall guests for their thought provoking and intelligent questions. 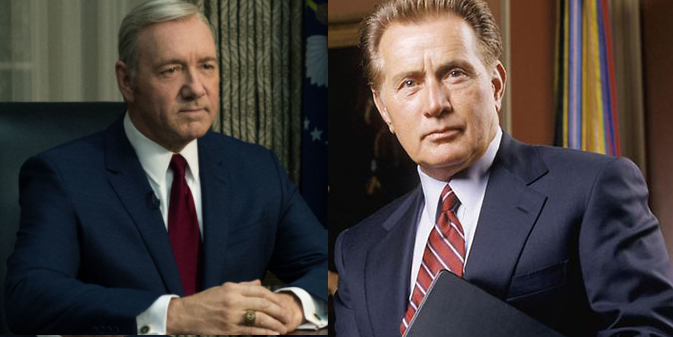