Prince Harry might be the unofficial runaway royal, but that doesn’t mean he isn’t devoted to giving back. The royal spent today working with Walking With The Wounded, a charity partner of Heads Together, the mental health campaign he started with the Duke and Duchess of Cambridge.

Walking With The Wounded is a group that supports former servicemen, providing them with mental health specialists, a cause that is extremely important to the younger members of the royal family. The prince spent time with people from the organization to learn about the mental health issues they’re facing. Prince Harry has been involved with the charity since it was established in 2010, meeting with members of the Gateshead Council and their police force, to figure out the best way to help veterans.

The multi-agency organization offers therapy to help former servicemen deal with depression, anxiety, substance abuse and PTSD. The rogue royal even jumped into a training session with Heads Together during his meetings. The team he cheered on was training to run in the Virgin Money Marathon, this April. Olympians Steve Cram and Jonathan Edwards were also there to promote the marathon. Outside, fans waited for hours to catch a glimpse of the prince.

“When you go home tonight, maybe tell your kids that sometimes you struggle with your emotions and that it is ok to talk about it. Or instead, maybe pick up the phone to a friend who you suspect may be finding it hard to admit that something isn’t right,” he said, according to Kensington Palace. And while Prince Harry would make the ultimate marathon cheerleader, the message he delivered is even more important than his presence. 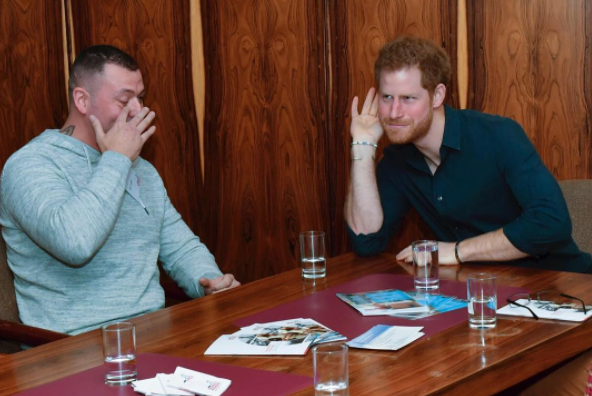