I have to admit that as a 40-year-old single man with no kids or romantic attachments, I am exactly the right audience to love a film like Punching Henry. This is a story where the protagonist endures epic failures, awkward moments, and humiliations galore and just shrugs it off like he expected it to happen.

Singer/Comedian Henry Phillips plays a less successful version of himself returning to LA after a self-imposed 5 year exile (this is a reference to his previous film Punching the Clown) to meet with a tv executive played by the charmingly gruff J.K. Simmons.

At the very beginning, an excited fan tells him he came all the way from Greensboro to see him, and upon hearing that Henry won’t be playing his favorite song accidentally bashes his head into a parking meter. This sets the tone for all the weird encounters we see as it constantly seems like Henry is getting bashed in the head just to be appreciated.

The narrative structure revolves around a podcast interview session hosted by Sarah Silverman, and provides him the sympathetic ear he so desperately needs to tell his story. He likes performing in coffeehouses and clubs all across America and doesn’t really listen to the other characters in the movie telling him how to improve himself. It presents itself as Henry vs everyone who doesn’t get it.

The comedy in the film is biting and acerbic and sharply drawn from real life. I was dying during an extended scene where he has a series of arguments with a taxi dispatch operator over the length of time he has to wait, and losing and finding his cell phone. He finally has to go to the office in person to confront the operator and recover his lost wallet after he’d just cursed the guy out over the phone.

One of the major themes is about how Henry doesn’t want to sell out and do something different while other people become successful doing what he refuses to do.  The obnoxious club owner of Stupid Joes for instance drives a fancy car, does broad insipid musical humor, and sells a commercial jingle.

The television people that J.K. Simmons introduces him to want to create a tv show revolving around him as a loser that just keeps going on oblivious of everything around him. They describe him as “having no respect of his peers” and “a loser’s loser”. “If a normal person had that life they would do something to change it right?” a female tv executive says before miming putting a gun in her mouth. “Hey guys. I’m right here.” Henry says at the other end of the table. The tv executives all laugh and nod.

They make a video of one his songs called “Mystery Girl” trying to get his music to go viral and it only gets 11,000 views. It’s in this performance though that we can see Henry truly in his element. He sings rambling weird folk songs with hilariously specific lyrics that get genuine laughs from the audience who can relate to his pain about a girlfriend with “rug burns on her knees” and who once “found this weird dildo thing in the top drawer of her dresser.” In the meantime he earnestly intones that “no one knows what she’s all about” as if he’s unaware of the joke.

At a later performance an audience member hands him a joint and Phillips doesn’t realize it’s lit. He puts it behind his ear and a few second later freaks out, tries hitting his head to get it out, and falls off the stage. The whole thing is captured on video and gets millions of views. The tv people love it and offer him a deal hosting a show of epic fail videos. “Fuck your songs.” They tell him. “The response was garbage. It was like trying to give away an old mattress or something.”

Henry wants no part of the deal and goes back to performing his songs in a club. J.K. Simmons tries to persuade him of the opportunity that he’s turning down, but Phillips is unconvinced. It’s at this point that the film relies on a conceit that feels like a false note: the notion that a live audience would be so enamored with someone with a bit of fame that they would interrupt his performance and ask him questions about falling off the stage. Don’t Think Twice, a brilliant movie about improv, had a similar pivotal scene that served as a wedge between a newly famous performer and his not famous friends. In this case, it drives a wedge between Henry Phillips and his would be tv deal.

Fame at all costs isn’t worth it to some people. “I think I’m failing very well at doing what I love” He tells Sarah Silverman as an explanation for the whole thing.

The credits roll and a final song plays serving as a coda to a film about feeling like you’re out of place and everyone else is happy. “I’m in a bowling alley somewhere near Oskaloosa, IA and you’re at the Walk of Fame.”

Punching Henry is extremely honest about sadness and depression, but the jokes and shrugs cause the blows to glance off.

The idea that someone could refuse to be the butt of jokes in exchange for fame may seem anathema to a larger audience, but it’s something they need to hear.

Punching Henry is available on Amazon and Itunes and on a very limited release this week at AMC Empire 25. 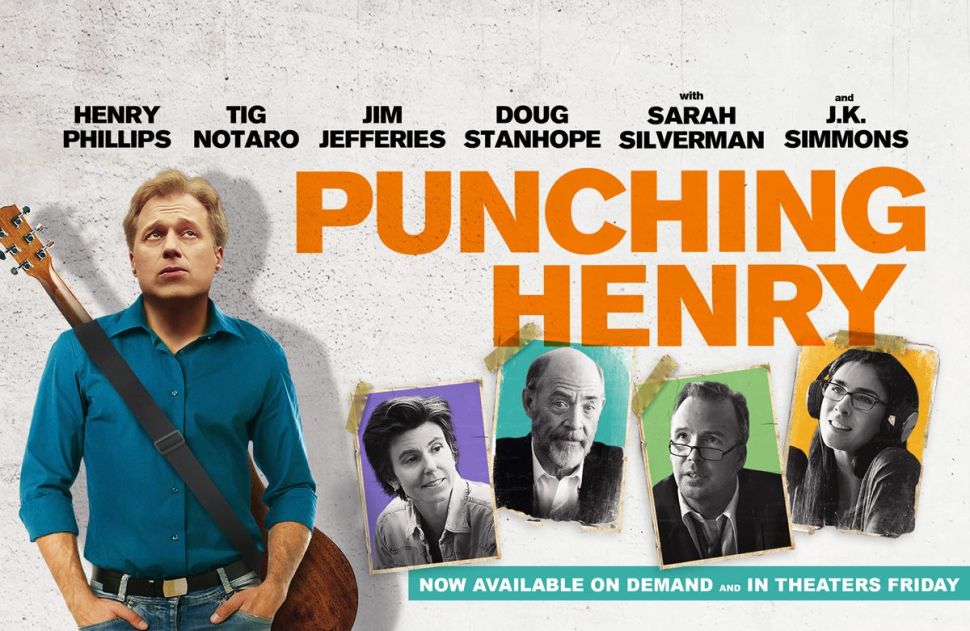