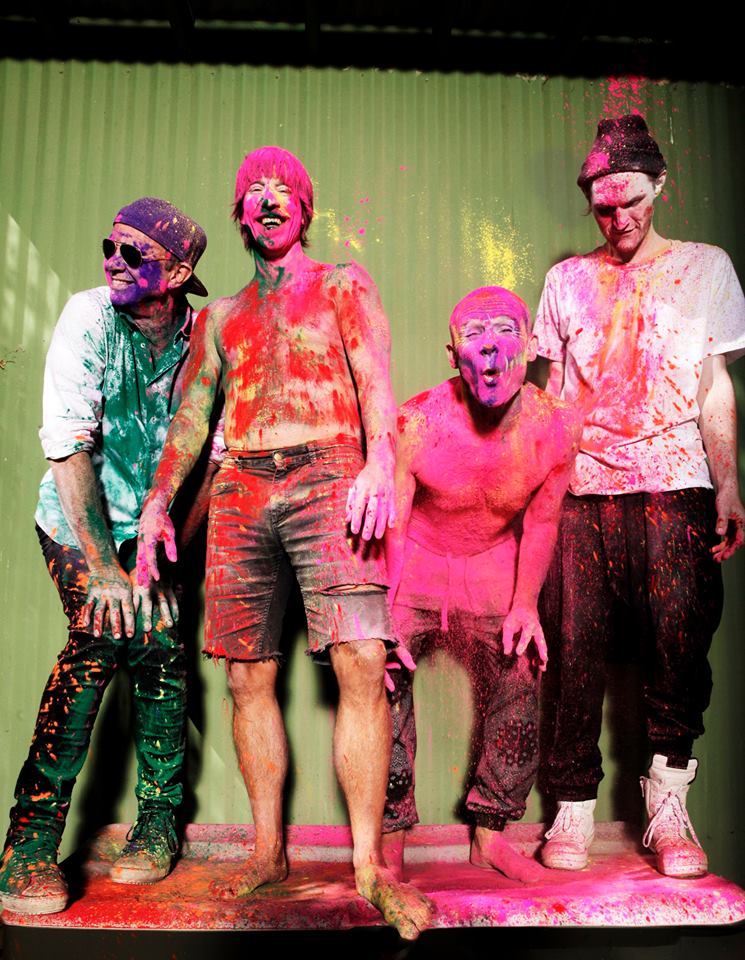 The Red Hot Chili Peppers were one of the first “alternative” bands I was ever exposed to thanks to the steady appearance of the video for their cover of Stevie Wonder’s “Higher Ground” on MTV back in the late ’80s. Mother’s Milk was one of the very first tapes I ever bought at a Tower Records.

My story isn’t a rare one; many from my generation were at one point or another unabashed RHCP fans. Unfortunately, thanks to the auspices of social media, many have made it abundantly clear how uncool these legendary cock sockers are today.

Well hate on, haters, the group’s second LP with Josh Klinghoffer, The Getaway, is not only their best album since Californication, it’s a late-career masterpiece that crystalizes their sonic footprint on the pop landscape.

In fact, The Getaway is perhaps the finest stop yet in the band’s long, hard road to maturity. A bonafide California rock album that pays homage to the band’s funk-punk past by setting it free into the clouds that hover above Laurel Canyon, when you look at the group’s last quarter century as recording artists for Warner Bros. Records, you can see that gradual transition from the rowdy funk punks of their EMI days of the mid-to-late ’80s to genuine masters of West Coast melodicism.

As RHCP remain in the thick of a three-night stand at Madison Square Garden this weekend, we’re looking back at 10 of our favorite songs that best exemplify the evolution of their sound over the last quarter-century.

After his appearance on the last Queens of the Stone Age album, it should not come as a surprise to see Elton John’s name in the credits of The Getaway. When the band was working on the song they would call “Sick Love”—based on Kiedis’ relationship with Australian model Helena Vestergaard—they used the root chord structure of “Bennie and the Jets” for the base groove.

“It just sounded like Elton was involved somehow, someway,” Klinghoffer said at the IHeartRadio record release party for The Getaway. “So we thought we should just invite him down and see if he likes it and wants to play on it.”

Sir Elton revealed himself to be a big RHCP fan, and offered the delicate piano lines you hear bumping up against producer Dangermouse’s synthesizer on this melodic highlight that also is noteworthy for Klinghoffer’s sweet clean channel riffage, arguably his best guitar work on a Chili Peppers record yet.

9) “The Adventures of Rain Dance Maggie”

When the Peppers released this ultra-catchy tune as the lead single for their first LP with new guitarist Josh Klinghoffer, it served as a beautiful, hopeful pop prayer for the West Coast, which was at the time in the throes of one of the worst droughts in American history.

It also showed that the promise of John Frusciante-era RHCP sound was alive and well in the capable hands of his six-string understudy, whose soaring guitar lines bob and weave around one of the most popping basslines Flea has ever slapped out.

If there is one thing that Kiedis and Frusciante should have done more during Frusciante’s time in the Chili Peppers, it was harmonizing together.

“Desecration Smile,” which kicks off the second disc of Stadium Arcadium, find the two friends bringing together their perfectly imperfect timbres in unison on another song that showcased the increased levels of tunefulness exhibited across the entirety of this massive collection of music. And for a song that debuted during the Chili Peppers’ performance at the 2004 Bridge School Benefit Concert, the strong sonic ties to Neil Young are indeed palpable.

Throughout his second tenure as guitarist for the Red Hot Chili Peppers, John Frusciante never stopped writing and recording for himself, releasing a string of great solo albums during this time like 2004’s The Will to Death and 2005’s Curtains, not to mention A Sphere in the Heart of Silence, an electronic art-rock collaboration with the man who would replace him in the band, Josh Klinghoffer.

That sense of industriousness was clearly infective, as the next RHCP album was 2006’s Stadium Arcadium, a 122-minute double LP said to have been influenced by The Mars Volta and R&B singer Brandy that would earn the group a Grammy for Best Rock Album in 2007.

“Slow Cheetah” on the album’s first disc, however, is its own beast. It’s an acoustic jangle that’s the closest the group has ever come to pure Canyon country rock before Frusciante embellishes in some Hendrixian backwards masking on the outro foreshadowing the guitarist’s own experimental future as a solo artist these last 10 years.

2002’s By The Way saw the Chilis double down on the subdued melodicism of Californication to further imbue the influence of The Beach Boys, The Beatles, Cameo Parkway doo-wop and, at least for Frusciante, the guitar work of Vini Reilly of The Durutti Column and XTC’s Andy Partridge.

And yet while By The Way is undoubtedly the least funkiest RHCP album out there. Its best song is a full-on throwback to the Blood Sugar era, albeit in a way that manages to imbue the groove in a way that’s more akin to Sparks than Rick James.

The return of John Frusciante into the RHCP fold in 1999 was a lifesaving event. Despite having recorded a pair of amazing experimental rock albums in 1994’s Niandra LaDes and Usually Just a T-Shirt and 1997’s Smile from the Streets You Hold, Frusciante—freshly discharged from rehab—was nervous about joining the band again, especially considering most of his prized guitars burned in a house fire that nearly cost him his life.

However, when they entered Flea’s garage to begin demoing songs for what would become Californication, the magic that manifested itself on the very best moments of Blood Sugar Sex Magik returned tenfold, with the album’s title track being the quintessence of Frusciante’s role as a key ingredient to the Chili Peppers sound in the Warner Bros. era.

As Kiedis sings about the dark side of Hollywood culture, the song is propelled by Frusciante and his vintage Gretsch White Falcon hollow body electric guitar, working off a variation of Robert Smith’s playing on The Cure’s Faith highlight “Carnage Visors.” It’s a perfect flagship song for the band’s most successful album to date.

When the Red Hot Chili Peppers debuted Jane’s Addiction guitarist Dave Navarro as their new axeman at Woodstock ’94 (remember them coming out with the lightbulbs on their heads and whatnot?), that was a big moment for alternative rock.

It was as big of a deal as when Ronnie Wood joined the Rolling Stones in the mid-’70s, or when Sammy Hagar replaced David Lee Roth as the lead singer of Van Halen in the mid-’80s. The pairing was seismic, and their sole LP together—1995’s One Hot Minute—remains more of a classic than a curio in their discography.

With Frusciante out of the picture, Kiedis took on the songwriting duties, and when coupled with his rekindled love for drugs, he took the RHCP sound to dark, more psychedelic places than ever before. But with “Aeroplane,” he crafted a tune that perfectly bridged the guitar heaviness of One Hot Minute with the group’s deep funk roots, providing the perfect playground for Navarro, Flea and Chad Smith to clash in the ultimate Los Angeles sonic street duel.

If there’s one thing that explains the runaway success of Blood Sugar Sex Magik as a crossover mainstream success, it’s got to be the ballads Kiedis wrote for the album. Namely “Under the Bridge,” a lament to drug addiction that gave the Peppers their biggest Billboard hit, peaking at No. 2 in the United States.

But that was not the best slow jam the band had conspired during these sessions. That honor goes to a song that languished on b-side purgatory before being added to the soundtrack to the 1993 cinematic adaptation of the legendary Saturday Night Live skit, The Coneheads.

Much of the movie’s otherwise forgettable soundtrack has since faded away into Gen-X obscurity, but “Soul to Squeeze” remains one of the Chilis’ most beloved ballads. Exhibiting a warmth the songs on Blood Sugar didn’t fully express, it served as a precursor to the direction the band would go in once Frusciante came back into the fold in 1999.

“To this day, I hate that song. I hate the lyrics, I hate the vocals,” Kiedis once said about this Blood Sugar deep cut, which the singer has claimed he was forced to write for the album by Rubin.

Yet for many fans, “The Greeting Song” ranks among the sentimental favorites on the album—a pure blast of intensity that showcased the Frusciante period of the band’s indomitable strengths as a punk band as much as a funk unit.

According to Setlist.fm, “The Greeting Song” was only played three times in concert by the Chilis since it was written and released, giving credence to the frontman’s distaste for the song. That’s a shame, because for many of us who’ve been listening to Blood Sugar Sex Magik for the last 25 years, it’s one of those tunes that always has us cranking up the volume whenever it comes on.

In the 1991 video documentary chronicling the creation of the Chili Peppers’ indelible Warner Bros. debut Blood Sugar Sex Magik with the assistance of super producer Rick Rubin, Anthony Kiedis made a quirky pontification about the relationship between the band and their new studio czar: “If Baron von Munchausen had ejaculated the four of us, being the Red Hot Chili Peppers, onto a chessboard, I would have to say Rick Rubin would be the perfect chess player for that particular board.”

No other song on their 73-minute-long magnum opus personifies that point quite like “Sir Psycho Sexy.”

At 8:17, the penultimate track on the album is also its longest. But what’s more, the song is the closest they had come at that point in fully emulating slow-burning soulfire of their heroes Parliament-Funkadelic while giving the larger-than-life ID-driven persona Kiedis exhibits onstage an official name. 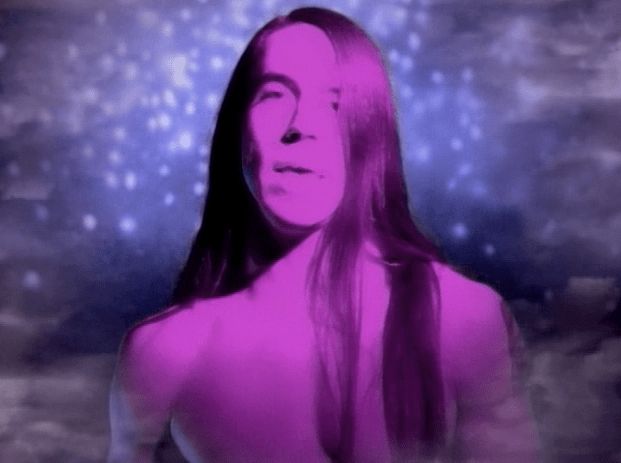